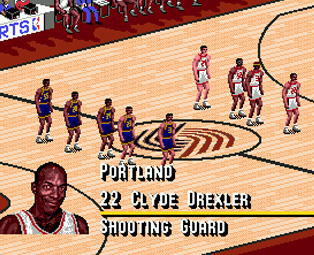 It happened over a decade ago, and I still remember it like I saw it yesterday. Scottie Pippen inbounded to Tim Hardaway, who busted it up the court, pulled up for a three, then dished off to an open Chris Webber at 15 feet out. Webber lost his defender with a spin move and found a double team waiting for him at the hoop. Undeterred, he pulled the dribble back to where he started and the double foolishly followed him, their mistake already made. A cutting Mitch Richmond could have just crushed the dunk and left it at that, but he decided to go reverse, then point at everyone on the court after the damage was done — you know, for humiliation’s sake.

With Shaq in the middle, the Golden State Warriors went 82–0 that season, steamrolling their way to the their first chip in 20 years. The win thrilled the capacity crowd, thousands of people who all looked alike, raising their arms in sequence. A few hours later, the team was dismantled and Chicago went on to have an undefeated season with a loaded team. Then Seattle. Then New Jersey, New York and both teams out in LA. I was the shrewdest GM, the best coach and the MVP of my team every season. I controlled it all with a controller in my hand, playing NBA Live 95 on the Super Nintendo.

I owned (as in owned) Live 95 for three and a half years, from the Christmas of ’94 until I finally coughed up the cash for a PlayStation in September of 1998. Over that time, I have no doubt in my mind that my brother and I became the world’s top two players at the game. Name the obstacle and one of us cleared it: 100-point games on three-minute quarters; 100-point victories; holding a team scoreless for quarters at a time; shooting 100 percent from the field for the entire game; never losing in the playoffs. We ran our pixilated competition off the court on the regular and we never got sick of it.

The magic of Live 95 lay in the fact that it didn’t matter that you knew you’d win by at least 40 every time you picked up the controller. After a while, the game wasn’t about how much you could win by, it was about how you won. Thanks to some primitive programming on the part of the EA Sports people, Live 95 was set up so that you could score on just about every possession. You could use any one of the following tactics to your advantage whenever you needed to:

• The spin move: Live didn’t have an actual spin-move button yet, but you could manually start to go right, bring the ball back, then go left (or vice versa), and your defender would pretty much chase you in a circle, giving you a lane that Oliver Miller could barrel his way through for a hoop (note the Old School Friday Oliver Miller Fat Joke).

• Drawing the double: As C-Webb did in the intro, all you’d have to do to draw a double is drive to the hoop. Bring your dribble back, and wait for two defenders to follow you. This almost always created an alley-oop, which was insanely easy to do. Just pass to the cutter and your work is done.

• Can’t miss three-point shooters: There were a lot of guys in Live who could stroke the three: Reggie Miller, Mark Price, Tim Hardaway and Chris Mullin were all fine and reliable. When it came to money shooters though, two guys stood above the rest: Glen Rice and Mitch Richmond. Since Rice and Rock could both dunk and bury it from 30 feet and in, they were the shooting guards of choice in the game. It didn’t matter if they had their backs to the basket, if they were fading out of bounds or if they had a defender hanging off of them: Glen Rice and Mitch Richmond didn’t miss. Ever. 40-, 50-, and 60-point games were never out of the question with these guys. The best strategy was to have both guys on your team and have one of them come off the bench, so that you could sub one for the other after each quarter.

• Getting the ball back: The best way to run your score up and to keep the opposition’s point total low is to keep the ball out of their hands. To do this, you could either time the inbounds properly, which always resulted in a steal and quick layup/dunk, or try and draw the offensive foul. After years of practice, I was able to draw the offensive foul on random players running up the court by standing in their direction as they headed up the court. My player would disappear off the screen, then a second later you’d hear the collision and the whistle. I’d have the rock back quick enough for a transition trey or a dunk every time. This isn’t so much a credit to my skill as an oversight on the programmers’ part, who had players running in predictable straight lines up the court. It still made me feel like I was the man though.

There was a lot more to Live 95 than simply winning. If that was the only thing that was cool about the game, I’d have gotten sick of it after I won my second or third chip. The concept of playing a whole season with one team was brand new, as was stat tracking, the 3/4-angle on the court, and the NBA on NBC-like presentation that EA gave you. Combine that with the ability to trade any starters in the league for each other (that meant, for instance, you could trade Milwaukee Bucks’ starting PG Eric Murdock for Shaq), and you could run a dream team lineup against every team in the league for 82 games plus the playoffs.

Sure, with Live 06 you’ve got a game that’s vastly superior to its counterpart from eleven years back (man, I’m feeling old). But game recognizes game. When you’re tired of playing in the dunk contest with LeBron, check out the option on Live 06 to visit the old school. Check Horace Grant in his goggles; check the fade on Penny Hardaway, and notice how the shorts were still kinda small in the League back then.

The details are there, with a squint and a stretch of the imagination.