Omer Asik Asked the Houston Rockets to Trade Him 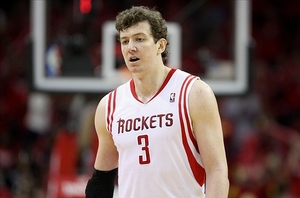 It was evident from Day One that the Omer Asik/Dwight Howard experiment wouldn’t work out. The Houston Rockets, of course, tried to convince everyone that it would.

With his starting spot gone and overall playing time slashed, Asik has once again asked for a trade.

Asik, a 7-0 center, made his trade request within the past 48 hours, a person familiar with the conversations said Thursday. The Rockets have no trade involving Asik, 27, in the works, with one individual saying a deal is more likely in months than in days. Asik declined comment, referring questions to his agent, Andy Miller, who also would not comment on the request.

“I would say the situation is very frustrating right now, and we’re trying to work through it,” Miller said. “For Omer, the objective has always been to continue to develop and grow as a player. That’s why we came to Houston in the first place. If that objective can’t be met, if we can’t get the right platform to grow and contribute as a player, it’s certainly frustrating.”

The Houston Rockets, sticking to the same stance they had at the beginning of the season, don’t appear to be quite yet ready to ship the big fella out of town. They have reportedly told his reps that a trade isn’t currently in the works.

Prio to Wednesday night’s loss in Philly, during which he played only four minutes off the bench, Omer Asik had started all 90 games since signing with H-Town as a free agent in 2012. He didn’t play at all last night against the New York Knicks, with head coach Kevin McHale claiming the center wasn’t feeling well.

The stalemate between the Houston Rockets and their unhappy big man continues. Omer Asik has two years and $20 million left on his contract.