One The Hard Way 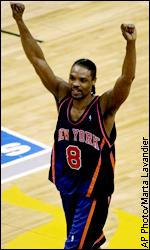 I didn’t go to the Knicks opener in Memphis last night. Nor did I watch it on TV (with the exception of roughly two minutes of the third and final overtime). In fact, I wasn’t even at home for much of it. But when I was on my way back, I received an e-mail from Lang entitled “Uptempo Collapse” with the message (I’m paraphrasing here) “you’d better be working on a column right now.”

Apparently the Knicks managed to blow a 19-point fourth-quarter lead against the Pau-less Grizzlies, before managing to pull out a win in triple OT. David Lee left the court still clutching the game ball, and all I could think of was “that’s one heck of a celebration for one win—against one of the worst teams in the League (with Pau out).” (Yes, I even think in parentheticals.)

By the time I tuned in, Steph and Steve Francis had already fouled out (the latter with a not-so-impressive two points), Quentin Richardson was hurting (already!) and one had to wonder whether releasing Jalen Rose was such a good idea after all. Also, Mike Miller needs a haircut. Dude. You look like Kara Wolters. Trim that creepy mess off your head before Jerry West trades you to the Storm.

I didn’t go to Jersey last night because I hate the pressroom food (kidding, Gary, kidding!), and I even shirked my LeaguePass duty (although I did tune into SportsCenter long enough to see the first of Rasheed Wallace’s 82 inevitable ejections). Hey, it’s a long season. Gotta pace myself.

(I wasn’t even gonna post this, but I figured the headline was too good to pass up. Go, me.)

(I should probably change the name of my column to “Parenthetically Speaking.”)

(Suggesting that Dwight Howard was the best player on the adidas roster was a bit of overexcited hyperbole. I understand that there’s no way he’s better than the Duncan Robot, Ticket or Gilbert. Jury’s out on Chauncey, and I don’t remember what Tracy plays like when he’s healthy anymore—is he the new Grant Hill?. Someday, though—Dwight, along with LeBron, Carmelo and Dwyane, is going to be at the very top of the game.)