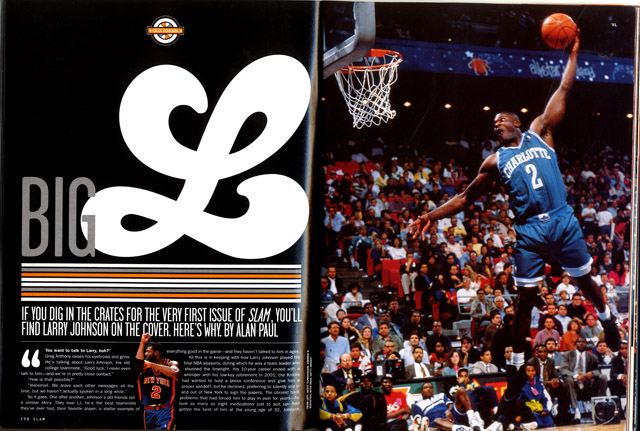 While we’re putting together our 150th issue, we’ve been thinking a lot about our first, which was covered by none other than Grandmama himself, Larry Johnson. In SLAM 77 (April 2004), Alan Paul took a look back at the importance of LJ’s 10-year NBA career.—Ed.

“How is that possible?”

“Voicemail. We leave each other messages all the time, but we haven’t actually spoken in a long while.”

So it goes. One after another, Johnson’s old friends tell a similar story. They love LJ, he’s the best teammate they’ve ever had, their favorite player, a stellar example of everything good in the game—and they haven’t talked to him in ages.

All this is in keeping with how Larry Johnson played his final NBA seasons, during which he was a team leader who shunned the limelight. His 10-year career ended with a whimper with his low-key retirement in 2001; the Knicks had wanted to hold a press conference and give him a proper sendoff, but he declined, preferring to silently slip in and out of New York to sign the papers. The chronic back problems that had forced him to play in pain for years—he took as many as eight medications just to suit up—had gotten the best of him at the young age of 32. Johnson returned to Dallas with his wifeand kids, never to be heard from by most of us again.

If you didn’t see LJ play before his final years at the Garden, you might shrug, wonder what all the fuss is about, and be surprised to learn he was SLAM’s very first cover subject. But at UNLV and with the Charlotte Hornets, LJ was a wondrous sight—a 6-7, 240-pound mass of chiseled muscle who could fly through the air with the greatest of ease. He was also armed with a litany of precise, near-perfect post moves. This combination of basketball’s yin and yang made him, when healthy, damn near impossible to stop. Still, he had to be told by his coaches to shoot more—imagine an offensive machine who was ever-ready to pass, loved to play D and could lock down a point guard tonight and a power forward tomorrow.

You won’t find his voice in the words that follow, but you will find his story.

Larry Johnson grew up in South Dallas’ Dixon Avenue projects (across the street from Dennis Rodman) in one of the roughest spots in town. His mother Dortha wanted to get him out of the hood, and she chose Skyline High because she heard that coach JD Mayo ran a tight ship.

“A few schools closer to home wanted him, but I thought Skyline was a better place for him,” Dortha Johnson says. “He was always playing some sport and that kept him out of trouble, and I wanted to keep it that way. A lot of the best athletes in this country come out of those other schools and never become nothing. Not saying nothing bad about them boys, but it’s the truth. And I didn’t want that to happen to Larry.”

As Mayo recalls, “Mrs. Johnson said, ‘Word on the street is you’re in charge, not the kids,’ and I said, Yes, ma’am. ‘And you make them wear ties on game days?’ Yes, ma’am. She said, ‘He’s yours. Do whatever you think is best.’”

When LJ arrived at Skyline, he was a 6-2, 190-pound 14-year-old who could run and jump, but he was raw like sushi. He was eager to learn, though, and able to absorb instruction faster than anyone his coach had ever seen. “He could master any fundamental immediately, because he was so focused and he understood the game so well,” says Mayo, who is still at Skyline. “You can’t imagine the intensity and focus he had to get to the next level. He did whatever I asked him to do, no questions asked, and he never lost that.”

By his senior year in 1987, Johnson was an unstoppable force on his way to becoming the National Player of the Year. He was also voted Most Likely to Succeed at Skyline, which goes to show he wasn’t an isolated jock. Turns out the Skyline students had excellent foresight: LJ made close to $100 million playing ball. Herb Williams, who was starring for the Pacers at the time and would soon join the Mavs, remembers the buzz about the big kid tearing things up in Big D. “People were comparing him to Michael Jordan,” Williams says.

When Skyline’s 34-2 season ended with a disappointing playoff loss, Mayo immediately retired LJ’s number 33 in his mind. (He wore the number to salute his idol and future Knicks teammate Patrick Ewing, even asking people to call him “little Ewing.”) A year later, Skyline formally mothballed 33. Johnson had signed to play at SMU, but when his second SAT score showed a huge improvement over his first, non-qualifying effort, the school president, fresh off a major football scandal, asked him to sit a year as a Prop 48. Instead, LJ went to Odessa JC, where he averaged 26 ppg in two years. He also had a tooth knocked out and replaced it with a gold incisor that became his trademark. In ’89 he moved on to UNLV, where he teamed with Greg Anthony, Stacy Augmon and Anderson Hunt to dismember Duke by 30 points in the 1990 NCAA Final, the largest margin of victory ever in a National Championship game.

“Larry put a good team over the top,” says former Runnin’ Rebels coach Jerry Tarkanian. “You knew he was going to be special the first time you ever saw him play. He had that body and great hands to go with tremendous basketball intelligence, but the biggest thing about him was his attitude. He is probably the best person I’ve ever coached or been around.

“All he cared about was the team,” the Shark continues. “I can honestly say there was never a time when Larry knew how many points he had after a game, and that rubs off. He did more to unify a team than anyone I’ve ever coached. He must have led the country in hugs during his two years here.”