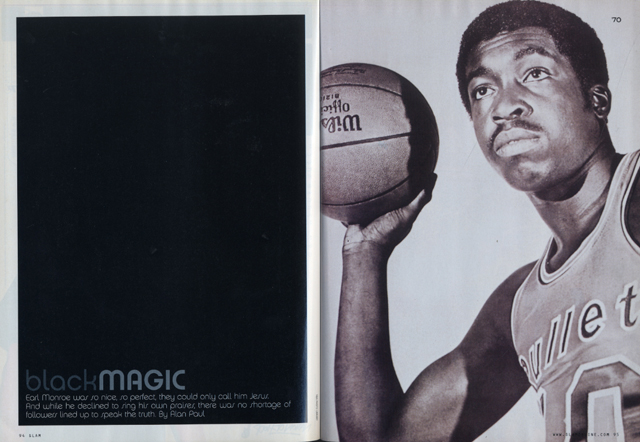 From the playground to college to the NBA, Earl Monroe was a legend. His moves on the court are the inspiration to many of the ones we see by the best guards in today’s NBA. Monroe played his last game 30 years ago, and to remember his career here’s a look back at a story on the legend from SLAM 54. –Ed.

SLAM has been on the trail of Earl Monroe for years, so I couldn’t believe my luck when the man himself answered the phone at his New Jersey contracting business. True to the word of anyone who knows him, Monroe was thoughtful, polite and articulate. He even seemed glad to hear from me, so his assertion that he didn’t want to talk about his career because he was “ancient history” came as a shock.

I assured him he was wrong, telling him how fellow Hall of Famers line up to sing his praises. Clyde Frazier says Earl is the only opponent he ever dreamed about stopping. Willis Reed calls him the only player he’d stay home to watch on TV. Tiny Archibald says it was an honor just to be on the same court. Hard-driving CEOs like Dave DeBusschere and Dave Bing sound like awe-filled kids as they recall his exploits. Still, Monroe doesn’t want to talk, thanking me for the attention and offering his blessing if we want to write a story without him. Recent health problems, he explains, leave him longing to look forward, not back.

It’s hard to believe there’s no room in Pearl’s mind for basketball-like hearing Shakespeare say words no longer interest him. After all, the guy had so much game, his street name was Jesus. What follows, then, are the words of his apostles. Hopefully, it’s enough to make you-and him-understand why those who were there were convinced that Earl Monroe was the Savior.

Earl Monroe was a legend long before he ever set foot on an NBA floor-a playground deity in his hometown of Philly, and a black college messiah after leading Winston-Salem State to the D2 championship in ’67, averaging 41.5 ppg in the process. But the points tell only part of the story.

“You could be embarrassed by Earl in a split second,” recalls Bing, the former Pistons great. “You had to be completely prepared and involved and even then you could only react because you never knew what he was doing next. He could get anyone out of position with his body contortions and fakes and he knew what to do once he had you there.”

Thanks to his endless improvisations and bottomless bag of tricks, Monroe was tagged with countless nicknames. He was Magic before Magic and Doctor before the Doc, to name a few.

“Some of Earl’s street names were Jesus, the Savior, Slick, Einstein, Thomas Edison, the Doctor and Black Magic,” recalls Philadelphia hoops impresario Sonny Hill. “Those names were an attempt by people to describe the unbelievable things they were seeing on the court. Earl’s game was hard to explain because it was the embodiment of the creativity of black culture.”

Monroe was a late bloomer, favoring soccer and baseball as a kid. He didn’t hit the hardwood until he was 14 and didn’t make the varsity at John Bartram High until midway through his junior year. After graduating, he enrolled at Temple Prep to improve his chances of getting a scholarship, but dropped out after a semester and worked as a shipping clerk.

All the while, Monroe’s playground legend was blooming. Though he played center in high school, on the blacktop, the 6-3 Monroe was already a whirling dervish of improvised moves. His street rep filtered all the way down to North Carolina, where Winston-Salem coach Clarence “Big House” Gaines offered Earl a roster spot, sight unseen.

“It wasn’t unusual to sign a player without seeing him, and I had no doubts about Earl because my boys in Philly told me he could play,” recalls Gaines, a Hall of Famer with the third-most collegiate wins ever. “In those days, you couldn’t get a bad player out of Philadelphia.”

Winston-Salem played in the CIAA league of black colleges, which was filled with top-shelf talent because D1 schools were only beginning to fully integrate. The league featured an up-tempo style that was rare elsewhere, and it allowed Earl to be himself. He averaged just 7.1 ppg as a freshman, but 23.2 as a sophomore and 29.8  as a junior before blowing up as a senior for 41.5.

Meanwhile, he continued to return to Philadelphia each summer, further blowing himself up in the city’s competitive Baker League. Tiny Archibald, another playground hero who became an NBA Hall of Famer, recalls people literally bowing down when Monroe walked onto the court for games pitting the Baker League All-Stars against New York’s Rucker League All-Stars.

“Earl was an attacker who made things happen,” Tiny says. “Inner-city playgrounds are filled with guys who are flashy for no purpose. But every move Earl made, no matter how incredible, was intended to score, not to show off. He did them to freeze defenders or send them the wrong way. When you watched him you were entertained, but his purpose was to win.”

The winning began in earnest during Monroe’s senior year, as Winston-Salem went 31-1 and won the College Division (now D2) championship, becoming the first black school to win an NCAA basketball title. This was the season that began to transform Monroe from an underground legend to an aboveground sensation. Put another way, it’s when some white people started to hear of him. It was also when he was tagged “the Pearl” after a writer referred to Monroe’s abundant points as “Earl’s Pearls.”

Despite all his success, Monroe was still considered an uncertain pro prospect. Going into the ’67 Draft, Baltimore and Detroit flipped a coin for the right to pick first and grab Providence’s Jimmy Walker. Detroit won the battle but lost the war. Still, the Bullets hesitated before selecting Monroe at the urging of a young scout named Jerry Krause.

“There were questions about Earl’s ability to perform against top-notch competition,” recalls Knicks announcer Marv Albert. “Once he got [to the League], however, you could see immediately he was the real deal.”

Two months into the season, Monroe was in full control of the Bullets, and was named Rookie of the Year after averaging 24.3 ppg, one point behind Wilt for third in the League. But, again, the points only tell a fraction of the story. Every guard in the League dreaded facing Pearl because his improvisational game made it impossible to anticipate on defense. Bing laughs when told that Frazier dreamed about defending Monroe.

“In our dreams is the only place any of us could stop Earl,” notes Bing, himself ROY in ’67. “He wasn’t exceedingly fast and he couldn’t jump all that high, but he had an uncanny ability to get free and he didn’t need much room to get his shot off.”

Monroe’s assortment of moves and brilliant, endless knowledge of the game became ever more important as his knees, already bad as a rookie, grew worse over the years.

“Earl had a great work ethic and he understood the game incredibly well,” says Frazier. “He always had an extra dribble because he never committed until after you did and then he was gone. And his footwork was exquisite; he always kept his feet staggered, so he could go left or right with equal ease, which is what made his spin move so effective. I never fully understood all these little tricks until Earl became my teammate and it helped my own game quite a bit.”

Despite such reverence from his peers, Monroe was seen by some as a flashy individualist, even after teaming with Wes Unseld to transform the Bullets into contenders. After losing to the eventual champion Knicks in the Eastern semifinals in ’70, they made the Finals the next year, losing to the Bucks of Lew Alcindor and Oscar Robertson. Monroe also remained a fixture in the Baker and other summer leagues, giving him a profound connection to the black community, even as others wrote him off as a sideshow. When he was traded to the Knicks midway through the ’71-72 season, critics clucked that Pearl would never meld with Clyde or fit into Red Holzman’s team-oriented system.

“There was some apprehension about Earl amongst the Knicks because no one really knew him,” recalls Albert. “As an opponent, he wasn’t around much, so some thought he was arrogant. But it turned out he was just very shy, and was, like, the greatest guy in the world. He fit in right away and became extremely popular with his teammates.”

Still, Monroe had a mystique. Albert recalls how Pearl often seemed to appear out of thin air. Frazier has a simpler explanation: “He was always late. Punctuality was not his thing. When Earl arrived, the plane departed.”

His game still intact, Pearl quietly took a backseat on the Knicks. Having averaged 24 ppg in four seasons with the Bullets, Monroe initially served as sixth man in New York before teaming with Frazier for one of the greatest backcourts in League history.

Says Frazier: “People questioned our ability to share the ball, but we never let our egos get involved and we didn’t worry about who was the ‘1’ or ‘2.’ We were guards. We had to handle, we had to score, and we had to rebound and play D. It was a joy to play with him, and it was ironic because he was so flashy on the court and so quiet and introverted off it. I was just the opposite. My game was relatively generic, but I had the Broadway image.”

While still electrifying, Pearl averaged just 11.9 and 15.5 ppg (on far fewer shots) his first two seasons with the Knicks, a sacrifice he never seemed to mind. Having accomplished so much individually, Monroe wanted only one thing: a ring. He got it, clinching the ’73 title by scoring eight points in the last two minutes of the deciding Game 5 against L.A. But the Knicks’ second title in four years was a last gasp. After one more year, DeBusschere and Reed were gone, Bill Bradley was barely hanging on-and Monroe again became a leading man.

When asked, Monroe upped his numbers, scoring 20 ppg or more from ’75-77. He was still solid in ’78 and ’79 before slowing down his final season. Still, it was a remarkable 13-year career for a guy who played with knees so bad, a ’68 Sports Illustrated  story questioned his ability to play more than a few seasons.

“Earl enjoys anything that’s the opposite of what people think,” says Hill. “When they said he couldn’t fit into the team system, he took his ego and put it in the bag. When they thought the Pearl had no more shine, he took it back out. His mind is always running, which is how he became such a unique talent. There’s not anyone you can compare him to, because there has never been anyone like Earl Monroe.”