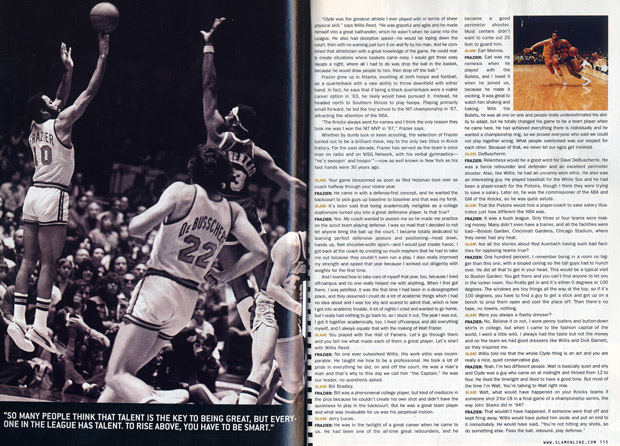 Yes, it was Willis Reed who inspired the 1970 Knicks to a title, but it was Walt “Clyde” Frazier who put in a monstrous performance to provide the W on paper. As we’re in the midst of the Knicks free agent hunt, Clyde is the link to both Knickerbocker past and present. Alan Paul sat down with him for SLAM 42 in another classic, original old school.–Ed.

You stand next to Walt “Clyde” Frazier and you feel underdressed. No matter who you are or what you’re wearing, it’s not going to match Clyde’s sartorial splendor. Sitting in a conference room in the bowels of Madison Square Garden a few hours before tip-off of a Knicks game, Frazier is wearing a smart, custom-tailored navy suit and a striking, narrow-collared dress shirt with subtle floral embossing. As good as he looks, his taste has grown conservative compared to his playing days when he earned his nickname—a tribute to gangster Clyde Barrow, of Bonnie and Clyde fame—by virtue of his floor-length fur coats, wide-rimmed Fedoras and his Rolls Royce.

On the court, Frazier backed up his flash with a game that was long on both style and substance. Clyde was the Knicks’ cornerstone at the point for a decade, leading the team to championships in ’70 and ’73, averaging 18.9 ppg and 6.1 apg and serving as the focal point on both ends of the floor. He was selected to the NBA’s All-Defensive team seven times and played in the same number of All-Star games. His selection to the NBA’s 50 Greatest Players list was a foregone conclusion.

“Clyde was the greatest athlete I ever played with in terms of sheer physical skill,” says Willis Reed. “He was graceful and agile and he made himself into a great ballhandler, which he wasn’t when he came into the League. He also had deceptive speed-he would be loping down the court, then with no warning just turn it on and fly by his man. And he combined that athleticism with a great knowledge of the game. He could really create situations where baskets came easy. I would get three easy layups a night, where all I had to do was drop the ball in the basket, because he would draw people to him, then drop off the ball.”

Frazier grew up in Atlanta, excelling at both hoops and football, as a quarterback with a rare ability to throw downfield with either hand. In fact, he says that if being a black quarterback were a viable career option in ’63, he likely would have pursued it. Instead, he headed north to Southern Illinois to play hoops. Playing primarily small forward, he led the tiny school to the NIT championship in ’67, attracting the attention of the NBA.

“The Knicks always went for names and I think the only reason they took me was I won the NIT MVP in ’67,” Frazier says.

Whether by dumb luck or keen scouting, the selection of Frazier turned out to be a brilliant move, key to the only two titles in Knick history. For the past decade, Frazier has served as the team’s color man on radio and on MSG Network with his verbal gymnastics—”He’s swoopin’ and hoopin'”—now as well known in New York as his fast hands were 30 years ago.

SLAM: Your game blossomed as soon as Red Holzman took over as coach halfway through your rookie year.

CLYDE FRAZIER: He came in with a defense-first concept, and he wanted the backcourt to pick guys up baseline to baseline and that was my forte.

SLAM: It’s been said that being academically ineligible as a college sophomore turned you into a great defensive player. Is that true?

CF: Yes. My coach wanted to punish me so he made me practice on the scout team playing defense. I was so mad that I decided to not let anyone bring the ball up the court. I became totally dedicated to learning perfect defensive posture and positioning-head down, hands up, feet shoulder-width apart-and I would just create havoc. I got back at the coach by creating so much mayhem that he had to take me out because they couldn’t even run a play. I also really improved my strength and speed that year because I worked out diligently with weights for the first time.

And I learned how to take care of myself that year, too, because I lived off-campus and no one really helped me with anything. When I first got there, I was petrified. It was the first time I had been in a desegregated place, and they assumed I could do a lot of academic things which I had no idea about and I was too shy and scared to admit that, which is how I got into academic trouble. A lot of nights I cried and wanted to go home, but I really had nothing to go back to, so I stuck it out. The year I was out, I got it together academically, too. I lived off-campus and did everything myself, and I always equate that with the making of Walt Frazier.

SLAM: You played with five Hall of Famers. Let’s go through them and you tell me what made each of them a great player. Let’s start with Willis Reed.

CF: No one ever outworked Willis. His work ethic was incomparable. He taught me how to be a professional. He took a lot of pride in everything he did, on and off the court. He was a man’s man and that’s why to this day we call him “the Captain.” He was our leader, no questions asked.

CF: Bill was a phenomenal college player, but kind of mediocre in the pros because he couldn’t create his own shot and didn’t have the quickness to play in the backcourt. But he was a great team player and what was invaluable for us was his perpetual motion.

CF: He was in the twilight of a great career when he came to us. He had been one of the all-time great rebounders, and he became a good perimeter shooter. Most centers didn’t want to come out 25 feet to guard him.

CF: Earl was my nemesis when he played with the Bullets, and I loved it when he joined with us, because he made it exciting. It was great to watch him shaking and baking. With the Bullets, he was all one on one and people really underestimated his ability to adapt, but he totally changed his game to be a team player when he came here. He had achieved everything there is individually and he wanted a championship ring, so we proved everyone who said we could not play together wrong. What people overlooked was our respect for each other. Because of that, we never let our egos get involved.

CF: Relentless would be a good word for Dave DeBuscherre. He was a fierce rebounder and defender and an excellent perimeter shooter. Also, like Willis, he had an uncanny work ethic. He also was an interesting guy. He played baseball for the White Sox and he had been a player-coach for the Pistons, though I think they were trying to save a salary. Later on, he was the commissioner of the ABA and GM of the Knicks, so he was quite astute.

SLAM: That the Pistons would hire a player-coach to save salary illustrates just how different the NBA was.

CF: It was a bush league. Only three or four teams were making money. Many didn’t even have a trainer, and all the facilities were bad-Boston Garden, Cincinnati Gardens, Chicago Stadium, where they never had any heat.

SLAM: Are all the stories about Red Auerbach having such bad facilities for opposing teams true?

CF: One hundred percent. I remember being in a room no bigger than this one, with a sloped ceiling so the tall guys had to hunch over. He did all that to get in your head. This would be a typical visit to Boston Garden: You get there and you can’t find anyone to let you in the locker room. You finally get in and it’s either 0 degrees or 100 degrees. The windows are tiny things all the way at the top, so if it’s 100 degrees, you have to find a guy to get a stick and get up on a bench to prop them open and cool the place off. Then there’s no tape, no towels, nothing.