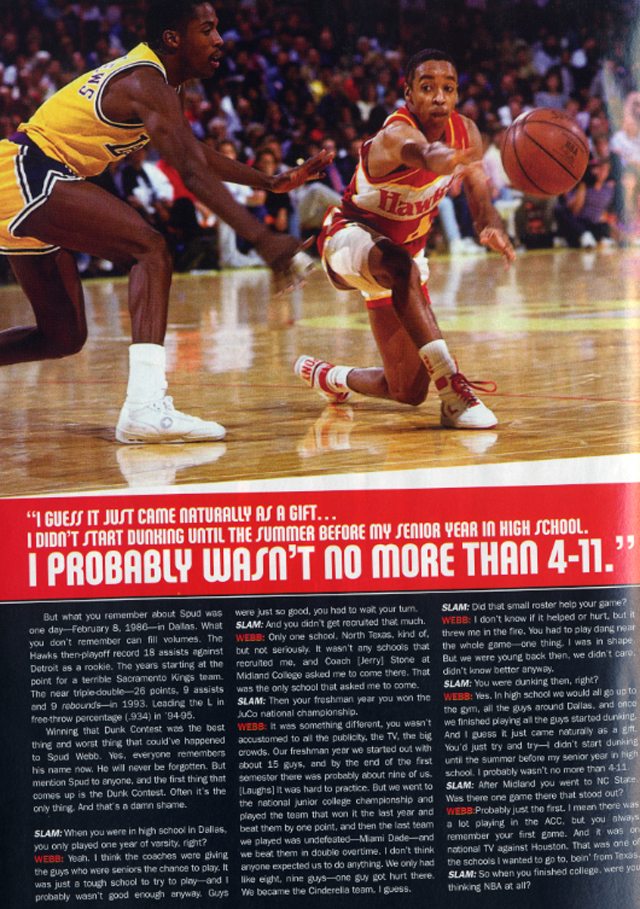 Mention Spud Webb and the first thing likely to cross your mind is that he won the Slam Dunk Contest. But what else do you know about Webb’s career? In SLAM 68, Webb talked about everything else, and of course that unforgettable night that he flew through the sky. –Ed.

The 5-7, 135-pound Webb won the 1986 Dunk Contest with one of the most flawless performances in All-Star history, including two perfect 50s to shut down teammate and favorite Dominique Wilkins in the final round. Right there, as a rookie, his career was forever defined by that single accomplishment. But Spud Webb didn’t make it to the NBA-didn’t last a dozen years there-because he could catch a basketball off the bounce and reverse dunk it with both hands. He made it because he could play. Flat-out. “Coach asked me and Dominique about Spud,” remembers Kevin Willis of Webb’s appearance in camp for the ’85-86 Hawks. “We were like, Hell yeah. He was so fast, so quick, and he could jump. We were known for running, so he was a perfect fit.”

Spud was drafted 87th overall by the Pistons in ’86, but wasn’t even invited to camp. Instead he latched on with the Hawks, who improved by 16 wins his rookie season, came within one win of the Eastern Conference Finals in ’88 and won 50 or more games each of his first four seasons. He also played for Sacramento, Minnesota and Orlando.

But what you remember about Spud was one day-February 8, 1986-in Dallas. What you don’t remember can fill volumes. The Hawks then-playoff record 18 assists against Detroit as a rookie. The years starting at the point for a terrible Sacramento Kings team. The near triple-double-26 points, 9 assists and 9 rebounds-in 1993. Leading the L in free-throw percentage (.934) in ’94-95.

Winning that Dunk Contest was the best thing and worst thing that could’ve happened to Spud Webb. Yes, everyone remembers his name now. He will never be forgotten. But mention Spud to anyone, and the first thing that comes up is the Dunk Contest. Often it’s the only thing. And that’s a damn shame.

SLAM: When you were in high school in Dallas, you only played one year of varsity, right?

WEBB: Yeah. I think the coaches were giving the guys who were seniors the chance to play. It was just a tough school to try to play-and I probably wasn’t good enough anyway. Guys were just so good, you had to wait your turn.

SLAM: And you didn’t get recruited that much.

WEBB: Only one school, North Texas, kind of, but not seriously. It wasn’t any schools that recruited me, and Coach [Jerry] Stone at Midland College asked me to come there. That was the only school that asked me to come.

SLAM: Then your freshman year you won the JuCo national championship.

WEBB: It was something different, you wasn’t accustomed to all the publicity, the TV, the big crowds. Our freshman year we started out with about 15 guys, and by the end of the first semester there was probably about nine of us. [Laughs] It was hard to practice. But we went to the national junior college championship and played the team that won it the last year and beat them by one point, and then the last team we played was undefeated-Miami Dade-and we beat them in double overtime. I don’t think anyone expected us to do anything. We only had like eight, nine guys-one guy got hurt there. We became the Cinderella team, I guess.

SLAM: Did that small roster help your game?

WEBB: I don’t know if it helped or hurt, but it threw me in the fire. You had to play dang near the whole game-one thing, I was in shape. But we were young back then, we didn’t care, didn’t know better anyway.

SLAM: You were dunking then, right?

WEBB: Yes. In high school we would all go up to the gym, all the guys around Dallas, and once we finished playing all the guys started dunking. And I guess it just came naturally as a gift. You’d just try and try-I didn’t start dunking until the summer before my senior year in high school. I probably wasn’t no more than 4-11.

SLAM: After Midland you went to NC State. Was there one game there that stood out?

WEBB: Probably just the first. I mean there was a lot playing in the ACC, but you always remember your first game. And it was on national TV against Houston. That was one of the schools I wanted to go to, bein’ from Texas.

SLAM: So when you finished college, were you thinking NBA at all?

SLAM: You were drafted by Detroit. Were you watching, or did someone tell you about it?

WEBB: Well you know, you hear things, you might get drafted. But there wasn’t a guy my size playing at the time, so it wasn’t like a team could really take a chance up front. So when Detroit drafted me I knew they were looking at guards, because they drafted Joe Dumars in the first round. But I never went to Detroit.

SLAM: You never even went to rookie camp?

WEBB: Well, probably after they seen Joe play they figured they had the guards that they needed. [Laughs]

SLAM: So you were contacted by Atlanta?

WEBB: They were one of the only teams serious about-and I think the Lakers, it’s been so long-they were talking about drafting me or bringing me to camp. Atlanta was a team that didn’t have a lot of guys to pass the ball with Dominique and all those guys, when I got there and started passing they all fell in love with me.

WEBB: Playing with a guy like that, you can’t explain it. I guess that’s why they call him the Human Highlight Film. He used to do things in practice and in the games, you’d call your buddies to tell ’em and say, You won’t believe this ’til you see it. The guy is just unbelievable, man. We used to sit in film watching other teams, and we’d end up watching him. That’s how incredible he was, and we used to look at him like, How did you get that off?

SLAM: Then you beat him in the Dunk Contest.

WEBB: Yeah, I think Dominique-we were like best friends. When you saw Dominique you saw me, when you saw me you saw Dominique, that’s how close we were. And when I first got to Atlanta, I was so intense about what was going on, I never dunked. Because I was busy trying to learn the system. Doc Rivers and them guys always had me out practicing, trying to help me out and be a friend, Johnny Davis. So when the Dunk Contest came, Dominique, Doc, none of those guys, they’d never seen me dunk before. Maybe a one-handed dunk in a game or practice, but they’d never seen the repertoire of dunks. So that was Dominique’s first time seeing it too, and I guess that’s why he was so shocked. He was like, “I can’t believe you did that! You were holding out on me!”

SLAM: Were you working on stuff on your own in the gym after practice?

WEBB: No, those were the dunks I used to do in the summertime when I came home from college, or in high school. And actually the week before that I twisted my ankle and I couldn’t really practice. I didn’t work on any of ’em, I just went out and those were dunks that I had been doing. I just noticed that after I did my first dunk, I can’t make them look that easy. Because people were surprised that you’d dunk that way-you just had to put some imagination into it. I don’t think anybody other than the guys who were in the gym with me in the summertime knew something like that. I think the whole world was surprised.

SLAM: Did you know what you were gonna do in advance, or was it just as you went?

WEBB: That was as I went. That was, What am I gonna do next? I never sit there and say OK, the first round I’m gonna do this dunk-it just came. That last one, man, I thought of that as I was walking out on the floor. I walked out slow tryin’ to think, What am I gonna do? We’d done so many dunks in the gym and tried so many, when I bounced the ball off the floor and hit the ball off the backboard, I didn’t know whether I wanted to dunk the ball backward or forward.

SLAM: So what was it like getting back to the team after winning?

WEBB: Oh, they all gave me a-they gave Dominique basically a hard time. [Laughs] Doc and them, Tree, they ribbed him for a month.