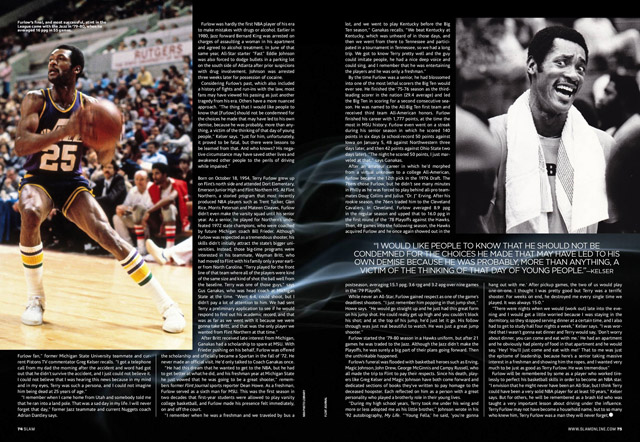 After authoring this Old School feature for the current issue of SLAM, I had a chance to sit down and talk with The Flint Journal’s Patrick Hayes. Here’s what I told him about Terry Furlow and I.

“I think I was pretty much destined to tell Furlow’s story just because of how all of the pieces feel into place for me. I wasnt biased in any of my article. I simply told the facts and let the readers think what they wanted to think. I dont think any other writer could have done this story in the right fashion if they werent actually from Flint. It still baffles me that his jersey isnt hanging from the rafters at MSU after all the big numbers he put up as a Spartan. The man averaged nearly 30 points per game as a senior! I hope my story can do the man some justice and bring light onto his greatness.”

Thousands of cars drive on North Saginaw Street in Flint, MI. Filled with various urban landmarks, including liquor stores, pawn shops and fast food restaurants, most residents don’t even notice Gracelawn Cemetery, which lies in the middle of all the action. In the midst of the cemetery is a tall, light burgundy marble tomb planted into the ground which reads, simply, FURLOW. Underneath this headstone rests one of the greatest players who ever balled in the city of Flint, Terry Furlow.

“I pass that grave almost every day,” says Terry’s younger brother, Eric Furlow. “My mom passed a couple of years ago, so she is buried right next to my brother, and I basically go down Saginaw Street every day where their graves are by each other.”

Before his untimely passing 30 years ago this spring at the age of 25, the 6-4, 190-pound Furlow was on the cusp of becoming a household name. Not only was he in his fourth season in the NBA, but he had just averaged a career-high 16 ppg for the Utah Jazz after being acquired from the Atlanta Hawks during the 1979-80 season. Everything was finally falling in place, not only professionally but also personally.

“(My) fondest memory is when we went to Atlanta, when he was playing with the Atlanta Hawks, and he had bought a house down there. He invited all of the family down there, and I’m talking about all of my brothers and sisters and all the family members, and he really showed us how to live,” Eric says. “He put us up on a lot of things and he told me and my siblings that we could basically be anything and do anything in the world that we want to do.”

On May 23, 1980, Terry Furlow stepped behind the wheel of his 1979 Mercedes Benz following a party in Cleveland for one of his former teammates, Clarence “Foots” Walker. On the way to his destination, his car went out of control on Interstate 71 in suburban Linndale and crashed head-on into a steel utility pole at about 3 a.m. Furlow died instantly. An autopsy revealed traces of cocaine and the tranquilizer Valium in his bloodstream.

His death had a profound affect on his family, friends and teammates. “I was devastated when I heard the news from my father, who was a big Terry Furlow fan,” former Michigan State University teammate and current Pistons TV commentator Greg Kelser recalls. “I got a telephone call from my dad the morning after the accident and word had got out that he didn’t survive the accident, and I just could not believe it. I could not believe that I was hearing this news because in my mind and in my eyes, Terry was such a persona, and I could not imagine him being dead at 25 years of age.”

“I remember when I came home from Utah and somebody told me that he ran into a land pole. That was a sad day in my life. I will never forget that day,” former Jazz teammate and current Nuggets coach Adrian Dantley says.

Furlow was hardly the first NBA player of his era to make mistakes with drugs or alcohol. Earlier in 1980, Jazz forward Bernard King was arrested on charges of assaulting a woman in his apartment and agreed to alcohol treatment. In June of that same year, All-Star starter “Fast” Eddie Johnson was also forced to dodge bullets in a parking lot on the south side of Atlanta after prior suspicions with drug involvement. Johnson was arrested three weeks later for possession of cocaine.

Considering Furlow’s past, which also included a history of fights and run-ins with the law, most fans may have viewed his passing as just another tragedy from his era. Others have a more nuanced approach. “The thing that I would like people to know that [Furlow] should not be condemned for the choices he made that may have led to his own demise, because he was probably, more than anything, a victim of the thinking of that day of young people,” Kelser says. “Just for him, unfortunately, it proved to be fatal, but there were lessons to be learned from that. And who knows? His negative circumstance may have saved other lives and awakened other people to the perils of driving while impaired.”

Born on October 18, 1954, Terry Furlow grew up on Flint’s north side and attended Dort Elementary, Emerson Junior High and Flint Northern HS. At Flint Northern, a storied program that most recently produced NBA players such as Trent Tucker, Glen Rice, Morris Peterson and Mateen Cleaves, Furlow didn’t even make the varsity squad until his senior year. As a senior, he played for Northern’s undefeated 1972 state champions, who were coached by future Michigan coach Bill Frieder. Although Furlow was respected as a tremendous shooter, his skills didn’t initially attract the state’s bigger universities. Instead, those big-time programs were interested in his teammate, Wayman Britt, who had moved to Flint with his family only a year earlier from North Carolina. “Terry played for the front line of that team where all of the players were kind of the same size and kind of shot the ball well from the baseline. Terry was one of those guys,” says Gus Ganakas, who was head coach at Michigan State at the time. “Went 6-4, could shoot, but I didn’t pay a lot of attention to him. We had sent Terry a preliminary application to see if he would respond to find out his academic record, and that was as far as we went with it because we were gonna take Britt, and that was the only player we wanted from Flint Northern at that time.”

After Britt received late interest from Michigan, Ganakas had a scholarship to spare at MSU. With Frieder pushing on his behalf, Furlow was offered the scholarship and officially became a Spartan in the fall of ’72. He never made an official visit. He’d only talked to Coach Ganakas once.