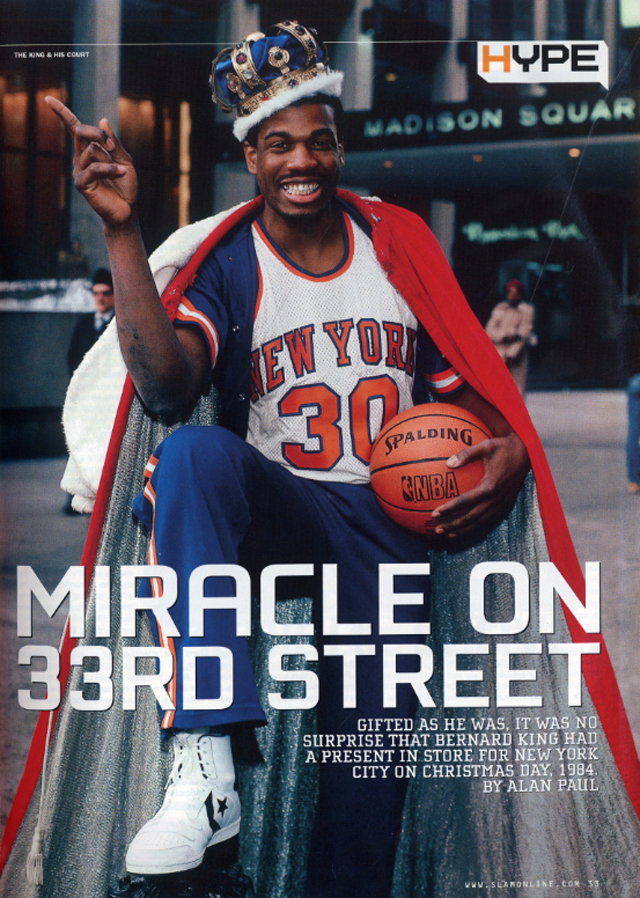 Tomorrow, December 25th, 2010, LeBron James and the Heat take on the Lakers on Christmas. James has been called “King” throughout his career, but Christmas Day will always belong to another King—Bernard King. A 60-point performance in 1984 has provided an unforgettable memory, not just to Knicks fans, but to all of those who follow the NBA. Way back in SLAM 84, we took a look back on a day fit only for a King.—Ed.

Bernard King was one of the NBA’s greatest scorers from the minute he set foot in the League in 1977, but it took him six seasons and four teams until he really found his niche. From the start of the ’83-84 season until he blew out his knee 55 games into the following year, the former Net, Jazz and Warrior was a force of nature for the Knicks, a wiry 6-7, 210-pound forward who routinely put serious beatings on much larger men. He scored 50 on consecutive nights in ’83-84 and single-handedly demolished the Pistons in the ’84 playoffs, averaging 42.6 ppg.

But all of that was just an appetizer for King’s real masterpiece: The entire ’84-85 season, when he led the League with 32.9 ppg and gave low-post clinics on a nightly basis. This brilliant season peaked when he dropped 60 on the Nets on Christmas Day, 20 years ago this month, causing more than a few people to spray eggnog out their noses. His Knick teammates, however, were largely unfazed by Bernard’s explosion.

“The most remarkable thing about the 60-point game was that it didn’t feel that remarkable,” says Ernie Grunfeld, King’s teammate both with the Knicks and in college at the University of Tennessee. “Bernard scored so many points in so many ways, it looked easy.”

In other words, scoring 60 was really just another game for Bernard, only more so. “I never played with anywhere near as relentless a scorer as Bernard,” says Louis Orr, another former teammate who played eight years in the NBA and is now head coach at Seton Hall. “He always got the shot he wanted, no matter who was guarding him. He never settled.”

Recalls former Nets guard Otis Birdsong, who took his turn trying in vain to slow King, “That unbelievable game Bernard had on Christmas Day was typical of what he did that entire season, when the basket must have looked like an ocean to him.”

Playing in a half-empty Madison Square Garden that Christmas Day in ’84, King came out blazing, scoring 21 in the first quarter and 40 by halftime, as one Net after another tried and failed to rein him in. Center Mike Gminski, power forward Buck Williams and guard Micheal Ray Richardson all piled up fouls while King compiled points. Desperate for a solution, Nets head coach Stan Albeck looked all the way down his bench to 12-year vet George Johnson. A seldom-used 6-11 defensive specialist, Johnson was available only because a back injury had Darryl Dawkins on ice. When he checked in with 5:45 remaining in the third, King already had 49. King scored two more in the period and nine in the fourth, but seven were from the free throw line as he shot 1 of 6 from the field, and the Nets actually came back to win 120-114. Check that score again: King set the franchise single-game scoring record while outscoring the rest of his team combined by six-which was not at all unusual, since he more than doubled the team’s next-closest scorer for the year.

His points never came easily, as Orr notes-he hit exactly one three-pointer for the year. Grunfeld remains in awe of King’s intensity to this day. “Johnson may have slowed him on that day, but no one could stop Bernard,” Grunfeld says. “Sixty points on Christmas Day gets your attention, but no one who played with him or against him was surprised.”

Sadly, the glory wouldn’t last much longer. “Bernard beat up his body and threw himself out there as much as anybody ever has,” adds Bill Cartwright, another teammate that season and now an assistant coach with the Nets. “He definitely put himself at risk, which is one reason he hurt his knee. He pushed himself to the furthest point possible, and you didn’t want to be in his way. There was no stopping him when he got the ball on the left side of the court. He was coming at you, and he wasn’t bringing any Kool Aid with him.”