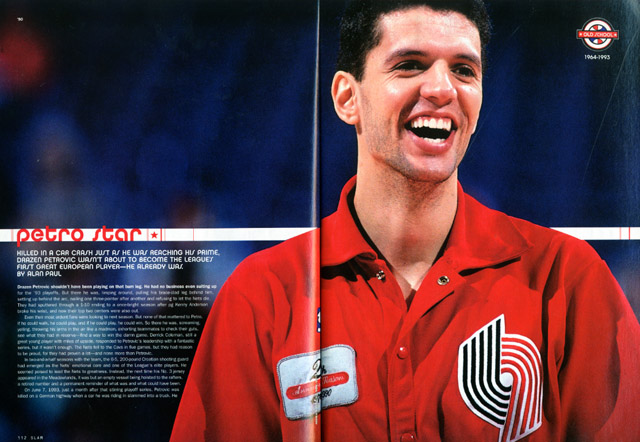 In preparation for Once Brothers, which airs tomorrow night on ESPN as part of their 30 For 30 series, here’s a look back at the life and death of Drazen Petrovic, that was originally published in SLAM 64. — Ed.

Drazen Petrovic shouldn’t have been playing on that bum leg. He had no business even suiting up for the ’93 playoffs. But there he was, limping around, pulling his brace-clad leg behind him, setting up behind the arc, nailing one three-pointer after another and refusing to let the Nets die. They had sputtered through a 1-10 ending to a once-bright season after pg Kenny Anderson broke his wrist, and now their top two centers were also out.

So there he was, screaming, yelling, throwing his arms in the air like a madman, exhorting teammates to check their guts, see what they had in reserve–find a way to win the damn game. Derrick Coleman, still a great young player with miles of upside, responded to Petrovic’s leadership with a fantastic series, but it wasn’t enough. The Nets fell to the Cavs in five games, but they had reason to be proud, for they had proven a lot–and none more than Petrovic.

In two-and-a-half seasons with the team, the 6-5, 200-pound Croatian shooting guard had emerged as the Nets’ emotional core and one of the League’s elite players. He seemed poised to lead the Nets to greatness. Instead, the next time his No. 3 jersey appeared in the Meadowlands, it was but an empty vessel being hoisted to the rafters, a retired number and a permanent reminder of what was and what could have been.

On June 7, 1993, just a month after that stirring playoff series, Petrovic was killed on a German highway when a car he was riding in slammed into a truck. He was 28. It was a particularly tragic end for a guy who had dodged bombs and seen his country fall apart, yet still risen from a small Croatian town to the top of the hoop world. In the process, Petrovic proved that Europeans could be more than role-playing sharpshooters. Peja, Dirk, Pau and the rest of their continental kin owe a huge debt of gratitude to Drazen Petrovic, the NBA’s first great European player.

His pioneer status is a key reason he’ll be inducted into the Basketball Hall of Fame on September 27, but Petrovic was more than just a door opener or a tragic footnote. He was a great player, with skills profound and pretty enough for him to be nicknamed “Amadeus” by the European press, a reference to the classical composer Wolfgang Amadeus Mozart. Always a tremendous shooter, Petro vastly improved the rest of his game over his final two seasons, upping his rebounds and assists and improving his D. In ’93, he averaged a career-high and team-high 22.3 ppg on 51.8 percent shooting.

That season, Petrovic also shot a stunning 44.9 percent from three and was named to the All-NBA third team. He had elevated himself to elite status, which is why Kenny Anderson makes a sour face when you ask him how good Petro could have been.

“He was already great,” says Mr. Chibbs. “He was just going to get better and better, because of his work ethic and his understanding of the game, which kept improving. He wasn’t lacking anything. He had a huge heart, he was a fierce competitor, and he had a great mind for the game.”

Petrovic also had an endless hunger for improvement. “You’d give him a scouting report and he would do everything but eat it,” recalls Bill Fitch, Petrovic’s first coach with the Nets and the man who urged GM Willis Reed to secure the guard’s services. The three-team trade that brought Petrovic from Portland (along with Terry Mills from Denver) to the swamp in exchange for Greg “Cadillac” Anderson and a future first rounder was one of the best in franchise history. If things had worked out differently, that trade probably would have accomplished what took another decade and another swap with a Western team to do: turning the Nets from laughingstocks to contenders.

“I knew it was a good trade, but I couldn’t have known how good until I really knew Drazen and his burning desire to be great,” says Reed. “He played as if he had something to prove, which he did-that European players could be in the upper echelon, which few people believed.”

Petrovic’s drive was such that anyone who knew him almost immediately mentions his work ethic. Anderson says that he reevaluated his own commitment after seeing how hard Petrovic worked. Both Fitch and Clyde Drexler, his one-time Blazers teammate, recall him as the first player at practice and the last to leave, and Reed laughs recalling how Chuck Daly, Fitch’s successor with the Nets, would often find Petro working out in hotel fitness rooms following shootarounds, while his teammates snoozed.

Petrovic’s compulsive workouts stemmed from the fact that they had already helped elevate him to greatness. He spent the summer after the ’91 season with Nets strength coach Rich Dalatri transforming both his body and his game. “It took some convincing to get Drazen to do that, but he took to it with complete dedication,” says Fitch. “I coached for 42 years and I never saw a player blossom the way he did that summer. He gained strength and endurance and transformed himself from a great scorer into a great all-around player.”

Fitch and others describe Petrovic as being obsessed with basketball, but one other thing intruded on his thoughts regularly during his time with the Nets-a brutal civil war that tore apart his homeland. “This was a time when you called home not knowing if the phone would be answered or if your whole family was now dead,” recalls Mario Miocic, a fellow Croatian and one of Petrovic’s best friends. “It was very difficult.”

The war that split their country into several new ones also caused a deep and fundamental rift between friends from different ethnic groups. Vlade Divac, a Serb, entered the NBA in ’89-90, the same season as Petro. The two were good friends, teammates on Yugoslavia’s ’88 silver medal Olympic team, along with future NBA stars Dino Radja and Toni Kukoc. Had the country stayed together, these players surely would have anchored the second-best international team in hoops. But war split apart their countries, and eventually Divac and Petrovic no longer spoke to one another. Miocic says Petro spent one offseason avoiding falling bombs by hiding in a Zagreb, Croatia basement. Fitch recalls the player sitting in his apartment, hunched over a short-wave radio listening with anguish to news reports from home.

“He became very bitter about the war and had a real chip on his shoulder which made it impossible to maintain his relationship with Vlade and other Serbian players,” Fitch says. “Vlade was a little softer about it. He felt that he wasn’t dropping bombs or fighting a war so why should a war come between two friends?”

That Petrovic became an NBA star while Croatia was struggling to establish itself as a nation probably helps explain the fervor with which he was embraced at home. He remains a national hero, commemorated on a postage stamp and on countless websites. Croatian tennis player Goran Ivanisevic dedicated his Wimbledon victory last year to Drazen.

Petrovic came a long way from the small city of Sibenik where he grew up balling with his brother. He made the Yugoslavian national team at 17 and quickly began lighting up the Yugo leagues, once scoring 112 points in a game. Notre Dame tired to lure him stateside, but he stayed home until ’88 when he joined Real Madrid and led them to a European club title.

The next year, he headed to Portland, where the Blazers had wisely chosen him in the third round of the ’86 Draft–the same year in which fellow Euro star Arvydas Sabonis was the team’s first-round pick. Petro was a key reserve on the Blazers team that made the ’90 Finals, but in his second season, his role was diminished and his minutes shrunk as he was stuck behind Clyde Drexler and apparently lacked the confidence of coach Rick Adelman. He was traded to Jersey in January of ’91 and began to write his real history. Ironically, Drexler may have been the only Blazer who knew what they were losing, telling a newspaper, “We just traded an All-Star.”

Petro averaged 12.6 ppg in 43 games for the Nets before emerging as a star in ’91-92. His team-high 20.6 ppg helped the Nets to their first playoff berth in six years, where he raised his game again, averaging 24.3 ppg in a first-round loss to Cleveland. The following season ended with that hard-fought, undermanned first-round loss to (once again) the Cavs. But by the summer of ’93, Petrovic was without a contract, and he told reporters that he might pounce on a lucrative offer to play in Greece.

Reed and Miocic insist Petro would have been back in Jersey in ’93-94, but he joined the Croatian national team that summer at least in part to illustrate his willingness to stay in Europe. After a tournament in Poland, with the team on its way back to Zagreb, Petro made a fateful decision to spend a few days in Germany with a girlfriend. “He had the boarding pass to Zagreb in his pocket when he decided to hang out for a few days,” says his agent, Warren Legarie. “It was a fluke he was on that highway, and it was odd that he wasn’t driving because he was a car fanatic and a great driver.”

As surely as his greatness opened the door for European players, Petrovic’s death launched a downward spiral for the Nets. Coleman’s disintegration, Anderson’s failure to blossom into a superstar, the decision to let Chuck Daly walk-all of it started with Drazen’s death. Says Reed, “You can’t alter fate, but you sure do wonder about it sometimes. We were on our way up and Drazen was the key in many ways. He was a great leader and a great guy. His death took the wind out of our sails. Watching the Eastern finals last year, I was thinking about how both us and the Celtics were devastated by the death of great, young players. We lost Drazen, they lost Len Bias and Reggie Lewis. You don’t get over a loss like that quickly.”

Nearly a decade after his death, everyone who was close to Petrovic remains shaken by it. Fitch, an old-school hard-ass during his endless career in the NBA, sounds anything but tough when talking about Petrovic.

“I want to cry every time I think of Drazen,” says Fitch. “Losing him in a car crash was just such a waste. He was a great competitor and a great kid, someone who lit up a room the moment he walked into it. And he had not peaked. He was still getting better. We only saw the tip of the iceberg with Drazen Petrovic.”