Original Old School: The Man Next To The Man 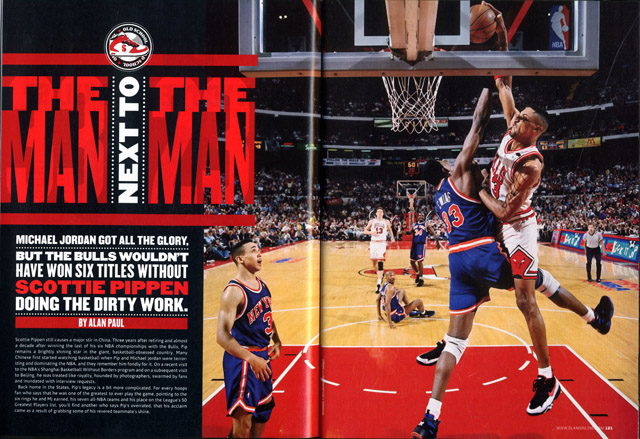 If the word “sidekick” was in an NBA Dictionary, an image of Scottie Pippen would probably be directly beneath it. The 2010 Basketball Hall of Fame inductee epitomized the role during his career as a Chicago Bull. Though Michael Jordan was the unquestioned leader of the Bulls during the 90s, Pippen was indispensable in his own right. The Bulls’ franchise recently honored the seven-time NBA All-Star with a sculpture in his image, which now resides inside of the United Center. Alan Paul caught up with Pip for this feature back in SLAM 113, but you can enjoy it here today. —Ed.

Scottie Pippen still causes a major stir in China. Three years after retiring and almost a decade after winning the last of his six NBA championships with the Bulls, Pip remains a brightly shining star in the giant, basketball-obsessed country. Many Chinese first started watching basketball when Pip and Michael Jordan were terrorizing and dominating the NBA, and they remember him fondly for it. On a recent visit to the NBA’s Shanghai Basketball Without Borders program and on a subsequent visit to Beijing, he was treated like royalty, hounded by photographers, swarmed by fans and inundated with interview requests.

Back home in the States, Pip’s legacy is a bit more complicated. For every hoops fan who says that he was one of the greatest to ever play the game, pointing to the six rings he and MJ earned, his seven all-NBA teams and his place on the League’s 50 Greatest Players list, you’ll find another who says Pip’s overrated, that his acclaim came as a result of grabbing some of his revered teammate’s shine.

Pippen sometimes made it easy to talk smack about him, with a haughtiness that included loudly proclaiming to SLAM that he should be in the top 10 of any greatest players discussion and, most notoriously, refusing to check back into a ’94 Playoff game with 1.8 seconds left because Phil Jackson drew up the final play for Toni Kukoc rather than him. That move cast a shadow over the fact that Pippen’s ’94 season was remarkable evidence of how well he could stand on his own. With MJ flailing at curveballs in baseball’s minor leagues, Pip led the Bulls to a surprising 55 wins—only two fewer than the previous year—while averaging 22 ppg, 8.7 rpg and 5.6 apg, and grabbing the All-Star Game MVP. The Knicks took the Eastern Semis in 7, thanks in large part to a phantom last-second foul call in Game 5 against Pippen, about which he is definitive today. “I didn’t foul him,” he sneers. “Not even close.”

Pippen redefined the small forward position. Previously populated with one-dimensional scorers like Eddie Johnson, Kelly Tripucka, and Kiki Vandeweghe, Pip’s success made it necessary for small forwards to be able to run, pass, board—and defend. He averaged more than 20 ppg four times in his career and clearly could have poured in more points, but he stuck to his role, which was complementary offensive player and defensive terror.

He made eight straight All-NBA defensive first teams and almost always locked down the other team’s best scorer, allowing MJ to roam the lanes like a free safety, making steals and being ready to turn and fast break. The Bulls’ defensive intensity, spearheaded by Pippen, also set up their offense, keying their fast break in which Pippen was an equal threat leading or trailing, dishing or finishing. He was also the de facto point guard of Phil Jackson’s triangle offense, directing the flow and initiating much of the action.

Pippen helped spur the Bulls breakup by demanding a trade following the ’98 season. He landed in Houston, where he spent one lockout-shortened season before getting traded to Portland. He was a huge part of the Rasheed Wallace-led 2000 Blazers that almost made the Finals, but ultimately Pippen’s four years in Portland were a disappointment. He finally retired in ’04 after one last season with the Bulls, and, rumors aside, we don’t expect to see him on an NBA court again.

In all, Pippen played 17 seasons, won two gold medals and six rings, played 8,000 minutes in 208 Playoff games—both second only to Kareem—and averaged 16.1 ppg, 6.4 rpg and 5.2 apg. Not bad for a guy who began his college career as a walk-on at the University of Central Arkansas. The more you think about it, the more it seems those Chinese fans are on to something. We caught up with him in Beijing.

SLAM: You have been the prototype small forward for guys who came after you. Who was your prototype?

SP: A lot of guys, not just one. I’ve always been a fan of the game and I watched Julius Erving, Larry Bird and Magic Johnson, as well as great big men like Kareem Abdul-Jabbar, Darryl Dawkins and Moses Malone. I patterned my game after all those guys.

I didn’t focus on one area of the game. I always characterized myself as an all-around player. I grew up as a point guard. Then I grew and that pushed me to other positions, from guard to small forward, power forward and even center, in college. That really benefited me, helped me get a nice, well-rounded package and have an all-around game.

SLAM: Your game blossomed in the triangle offense after Phil Jackson became head coach in your third year. Was it immediately apparent to you how well you would fit into that system?

SP: No. We fought his system and we didn’t believe in it. Eventually, we all bought into it and saw where it could lead us. Initially, we didn’t know the offense too well and it was very difficult for us to give up on what we had known about basketball for so many years and buy into a totally different system. We struggled with it but obviously it became very fruitful. We had a lot more confidence with the offense going into our second season with it and we won our first championship.

SLAM: You and MJ shared an intensity and drive to win. Did you recognize that in each other quickly and realize how successful your partnership could be?

SP: I think we both recognized that we had the same goal—to be the best. And we didn’t want to step on each other’s toes to do that and we understood that you win as a team and not as an individual. We learned that early, separate from each other. When we came together we bonded really well. We had a great understanding of what team and chemistry mean to the game of basketball. And we were able to take advantage of that, by playing together for so many years and just allowing our relationship to develop more and more.

SLAM: How would you describe your on-court relationship with MJ?

SP: It was great. We had an outstanding relationship on the basketball court. There was nothing that could really pull us apart because we succeeded at what we wanted to as basketball players. As our success level went up, we embraced that. We knew what we were doing to keep the momentum going. It was a tremendous relationship.