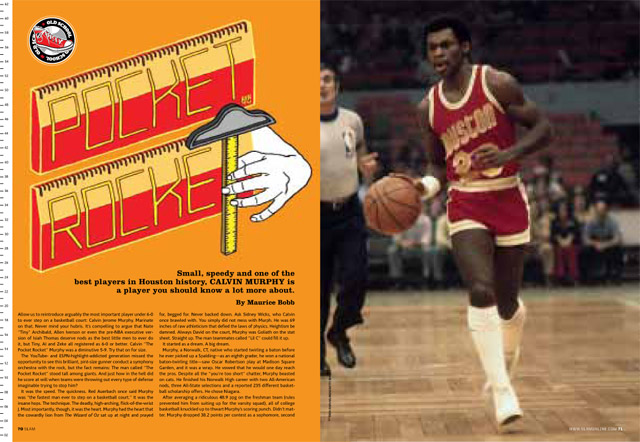 Allow us to reintroduce arguably the most important player under 6-0 to ever step on a basketball court: Calvin Jerome Murphy. Marinate on that. Never mind your hubris. It’s compelling to argue that Nate “Tiny” Archibald, Allen Iverson or even the pre-NBA executive version of Isiah Thomas deserve nods as the best little men to ever do it, but Tiny, AI and Zeke all registered as 6-0 or better. Calvin “The Pocket Rocket” Murphy was a diminutive 5-9. Try that on for size.

The YouTube- and ESPN-highlight-addicted generation missed the opportunity to see this brilliant, pint-size gunner conduct a symphony orchestra with the rock, but the fact remains: The man called “The Pocket Rocket” stood tall among giants. And just how in the hell did he score at will when teams were throwing out every type of defense imaginable trying to stop him?

It was the speed. The quickness. Red Auerbach once said Murphy was “the fastest man ever to step on a basketball court.” It was the insane hops. The technique. The deadly, high-arching, flick-of-the-wrist J. Most importantly, though, it was the heart. Murphy had the heart that the cowardly lion from The Wizard of Oz sat up at night and prayed for, begged for. Never backed down. Ask Sidney Wicks, who Calvin once brawled with. You simply did not mess with Murph. He was 69 inches of raw athleticism that defied the laws of physics. Heightism be damned. Always David on the court, Murphy was Goliath on the stat sheet. Straight up. The man teammates called “Lil C” could fill it up.

It started as a dream. A big dream.

Murphy, a Norwalk, CT, native who started twirling a baton before he ever picked up a Spalding—as an eighth grader, he won a national baton-twirling title—saw Oscar Robertson play at Madison Square Garden, and it was a wrap. He vowed that he would one day reach the pros. Despite all the “you’re too short” chatter, Murphy beasted on cats. He finished his Norwalk High career with two All-American nods, three All-State selections and a reported 235 different basketball scholarship offers. He chose Niagara.

After averaging a ridiculous 48.9 ppg on the freshman team (rules prevented him from suiting up for the varsity squad), all of college basketball knuckled up to thwart Murphy’s scoring punch. Didn’t matter. Murphy dropped 38.2 points per contest as a sophomore, second only to “Pistol” Pete Maravich. Murphy’s legend wasn’t cemented, however, until his coming out party against Syracuse. Picture this: Niagara University Student Center, December 7, 1968. Everyone knew the Purple Eagles’ offense began and ended with Murphy. Problem was, no one could stop the reign. In spite of Syracuse’s suffocating D, Murphy torched the Orangemen for 68 points (still the eighth-highest individual player point total in NCAA history) on 24-46 shooting from the field and 20-23 from the charity stripe, to go with 6 rebounds and 6 assists in a thrilling 118-110 victory.

Fast forward to 1970. Frank Hamblen, a former Syracuse player who witnessed Murphy’s dominance first hand, was a scout for the San Diego Rockets and urged his ball club to draft the three-time All-American in the second round. After a 13-year run in the NBA with the San Diego/Houston Rockets, Murphy rode his uncanny scoring ability all the way to the Naismith Memorial Hall of Fame. His best season in the L was ’77-78, when he averaged 25.6 ppg. He currently ranks third in the NBA record books for consecutive free throws made (78) and first for seasonal percentage (.958) after connecting on 206 of 215 attempts during the ’80-81 campaign.

Additionally, he led the League in free-throw percentage twice and eight times finished among the top five. When he hung up his sneaks, Murphy made all of his detractors eat crow and proved without question what Bushwick Bill proclaimed repeatedly in his discography: Size ain’t shit.

SLAM: You had hundreds of schools clamoring for your services. Why Niagara?
CM:
I chose to go to Niagara because they really rolled out the red carpet for me. The whole school recruited me, not just the coaches, but the whole school was in on it. And they approached me differently than any other school. They offered to teach me how to be a man, not just a basketball player. It was the only school I visited.

SLAM: You put up some serious points for a little guy. How did you get your shot off against so many taller players?
CM: They were either too big or too slow. I was known as a scorer and I knew how to get my shot off. My coach didn’t wanna hear that “little man” bullshit. He said go out and play hard, so I was coming at you. I’d dribble down court and give you a couple head fakes. If you fell back, I pulled up for the jump shot. If you came at me, I went around you. It was the best move in the business. You couldn’t stop it.

SLAM: Did you get teased for twirling a baton?
CM: People said a boy couldn’t twirl a baton without being labeled a sissy, but I never got that label. I never lifted a weight in my life, but the baton twirling really helped with my upper body strength and hand-eye coordination. It really helped with my basketball abilities.

SLAM: So how did you go from baton twirling to basketball?
CM: My mother made me take up baton twirling, but she was also a great basketball player. She played pro ball, so I took to it like a fish to water. I was quick and strong. You wanna talk about athletic ability? They talk about Spud Webb jumping in the Dunk Contest, but I was jumping like that in high school.

SLAM: Was your 68-point game vs. Syracuse your coming out party?
CM: Most definitely. I became legit after that.

SLAM: You averaged 33.1 ppg in college but fell to the second round in the 1970 NBA Draft. How did that feel?
CM: I was hurt. I was hurt that after making the All-American Team three times, they would still hold my size against me. But I went first in the second round, and I said, “I’ll show you,” and I did.

SLAM: Was the transition to the NBA easy?
CM: My rookie year was easy because I’d already seen every defense. And in the pros, you had to guard me one-on-one. That was a field day for me. I had pros that really taught me the pro game. I was tough and physical. You got away with a lot more back then until the Rudy Tomjanovich thing happened. But I was tough. I remember when two 6-8 players got mad at each other and tried to slap me around. I was like, “Hell no! Bullshit!” I can throw hands with the best of them. I’m from the street, too. So after I showed them I wasn’t to be messed with, they stopped that real quick.

SLAM: Things got rocky after that, right?
CM: I had seven different owners and coaches, so I had to start over seven different times. I would get benched and had to work my way back to the starting lineup.

SLAM: You only made one All-Star team. Why?
CM: They looked at my situation and they’d say I was next in line to be selected six other times, but you have to remember we weren’t winning and we were in a small market, so I only made it that one time.

SLAM: Then Moses Malone came to town.
CM: Moses was one of the most gifted players to ever play. I say all the time that he made me. I learned real quick to pass him the ball and he’d get double-teamed and he’d kick it back out to me and I’d burn them for it. Moses jokes all the time that I made him because he would rebound all the shots I missed and I’d say that’s bullshit. But we are really great friends. He’s an asshole, but a great player and friend.

SLAM: You really killed it as a color commentator for the Rockets. Were you always that funny?
CM: Let me tell you: (Play-by-play) Bill Worrell really made me a celebrity after basketball because he hired me and told me to just be me and he allowed me to be me. I’m a clown anyway. I love to make people laugh. Bill mentored me and taught me how to be a broadcaster and I really loved that time with him. We were on the air together for 14 years and I loved him like a brother.

SLAM: And those suits? Wow.
CM: Everybody loved those loud suits. The louder the better.

SLAM: On a more serious note, several of your daughters accused you of sexual abuse. What was that about?
CM: They were upset that I wasn’t giving them the money their mother left for them and they said they would do something to me, and that was what they did. It was unfortunate and it was a private family matter over greed that went too far.

SLAM: How did you cope with it?
CM: It was a bitch. I felt like I was naked in the snow. It was the worst. It would have never gone to trial based on the evidence they had, but since I was a celebrity, they picked it up and ran with it. They even tried to recant before it went to trial, but it was too late. Rusty Hardin was a great lawyer and fought the case really well. It didn’t hurt that three of them admitted to lying on the stand. But I was vindicated and I put that behind me. I know it will always be there and I’m not ashamed to talk about it because I was vindicated. It didn’t happen and it’s not something that could ever happen. It’s not who I am. And for them to say I had 14 kids by nine different women was bullshit and a flat-out lie. Things came out that I didn’t want to know in that trial. I learned that five of the girls weren’t biologically mine, but I had raised them and they had the Murphy name. But people didn’t investigate first and look at the facts. You cannot imagine how tough that was to go through. It was a bitch.

SLAM: Was it salt on the wound to lose your commentator gig with the Rockets afterward?
CM: It hurt when they didn’t support me after I was acquitted, but I understood the business behind it and I was with the Rockets for 35 years. I really do miss it, but I’m OK.

SLAM: It actually took a few times for you to finally get into the HOF. Did that bother you?
CM: I actually cried when I got in. I had to catch my breath. My heart stopped when they said, “And now we introduce the best basketball players in the world.” I went in with Dr. J and that’s the ultimate. Did it add to my ego? Hell yeah! I’m not gonna bullshit you. When I looked at myself and what I’d accomplished, I was like, you can’t shun or deny the Murph. Was I pissed I didn’t get in earlier? Of course. But it doesn’t get any better than getting into the HOF.

SLAM: As you look back, what do you think your influence was on the game?
CM: I was the original little man. I literally changed the way the game is played by little men. After me, the League stopped judging players on just size alone, and they started looking at ability.