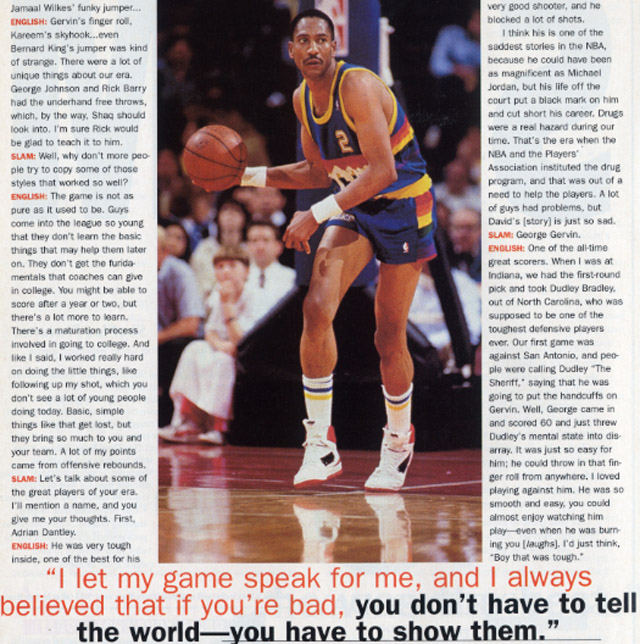 Whether this is the first time you’ve heard of Alex English or the first time in a while, it’s time we show the man some love, if for no other reason than he seldom gets any. Ripped from the pages of SLAM 21, check out Alan Paul’s lengthy Q+A with the explosive scorer.—Ed.

Alex English outscored them all.

The smooth, wispy small forward was the decade’s leading scorer, pouring in 19,682 points, mostly for the Denver Nuggets. A second-round pick out of South Carolina, English averaged over 23 ppg for nine straight seasons and was the first player to score 2,000 points a season for eight straight years. He finished his career with 25,613 points. Despite his rail-thin build, the 6-7, 190-pound English scored almost all of his points within 10 feet of the basket. From short- and mid-range, he was deadly, with a unique jumper – arms nearly fully extended above his head, he released the ball with a flick of the wrists – that allowed him to get his shot off with people in his face and draped all over him. He also had a deadly running one-hander.

“As a scorer, he was the best,” English’s Nuggets coach Doug Moe once said. “He was also a great athlete, and that allowed him to run the floor unbelievably well.”

Running the floor was certainly a key to English’s success; Moe’s Nuggets team ran like few others. They set an all-time record by averaging 126.5 points per game during the ’81-82 season, during which they also became the only team in league history to score over 100 in every game for an entire season. The Nuggets’ run-and-stun style minimized English’s accomplishments in the minds of some observers; then the seventh-leading scorer in league history (his total has since been surpassed by Michael Jordan and Dominique Wilkins), he was left off the NBA’s 50 Greatest list, a dis whose blow was softened when he was subsequently elected to the Hall of Fame immediately upon his eligibility.

It’s worth noting that for all those points, English was not a one-dimensional gunner: he led the team four times in offensive rebounds, once in steals, twice in assists and four straight years in blocked shots. In short, he was a player.

“He was a quiet assassin,” says Mike Evans, the Nuggets director of personnel and a teammate from ’83 to ’88. “Alex was all business when it came time to play basketball. He took it very seriously; he was very focused all the time: a top-notch competitor with quiet reserve.”

SLAM: Why do you think you were left off the NBA’s 50 Greatest list?

ALEX ENGLISH: I don’t know. Perhaps they thought they had too many guys from my era on there, because they also overlooked Bernard King, Bob McAdoo and Adrian Dantley, all of whom I thought were amongst the greatest.

SLAM: Did having such good company make you feel any better?

ENGLISH: Yes, it did. Bernard called and offered his condolences, [laughs] and said that he didn’t think it was right for me to be left off, and I said the same to him. But what really eased some of the hut was getting elected to the Hall of Fame last spring, the first time I was eligible, which was an honor.

ENGLISH: Thank you! I sure did, and I appreciate it, and I’m sure the other guys do too. I think that was more of a true list, done without political considerations, based on the only true question: Who could play the best?

SLAM: Do you feel you’ve been underrated?

ENGLISH: To a certain extent. We didn’t get much media attention in Denver, even though we won. The Nuggets were in the playoffs eight years in a row, and in the Western Conference Finals in ’85. We were sort of like Utah before they got to the Finals this year, because you tend to get overlooked out west. They say we play an uptempo brand of basketball, but it is basketball all the same.

SLAM: That brings up another point: a lot of people have downplayed your numbers, because you played in such a wide-open system under Doug Moe.

ENGLISH: You could say that about a lot of folks. But the fact is, what I did was done, and it was done against some of the best to ever play the game. Every night, I had the best defender on the floor in my face. And it wasn’t just points with me. I’m also in the top-50 assist leaders of all time, and there’s not many forwards on that list.

And early in my career, we would play almost every night – four games in five days, three games in three days. They don’t do that anymore, because it wore you out – especially if you were a small forward, because every night you had to guard an unbelievable player. You could go play Greg Ballard one night, who would shoot the jumper on you, then go play Adrian Dantley, who’d beat you up inside the next night, and the following night you might have to play Bernard King, who’d run over you. Then you’d get a night off and go play Marques Johnson and Walter Davis, get another night off and go play Larry Bird and Kevin McHale, then fly down to Atlanta and chase Dominique Wilkins around the court. It wasn’t easy.

SLAM: Yeah, but playing in coach Doug Moe’s system must have been a lot of fun.

ENGLISH: It really was. I’m sure a lot of people wish they could play that way today. To be honest, I think the type of basketball they play now is a bit boring. They’ve taken the individual’s game away, and I think that’s why they need to move back the three-point shot – to open up the lane and bring back some more individual play. When they moved the line up, the court got smaller and teams started packing down into the lane and getting away with playing a lot more zone. Let ’em run!

SLAM: You were always very thin, and partly because of that you had doubters at every level; they said you wouldn’t have the stamina or strength to stick around. Did that impact you at all?

ENGLISH: Yes. It made me work harder. All the doubters were just fuel for the fire. I worked very hard at the game. Almost all of my stuff came within 10 feet of the basket. Everyone knew that if I was down low, I was gonna get the ball, turn around and shoot a jump shot. But it was something that they didn’t know how to stop, because of the technique I’d mastered working really hard for years. And if I missed the shot, I’d be following it, looking for the putback. I would do whatever it took to put points on the board.

SLAM: You had one of the most distinctive jumpers of all time. How did you develop that?

ENGLISH: Believe it or not, I learned that in ninth grade from my principal. My shot was getting blocked a bit, and he showed me a way to improve it. I just started working on going up as high as I could and releasing the shot with the wrist. It made it a hard shot to block. Then I also started working on other things to prevent being blocked, like a running one-hander. I worked very hard to develop that shot and used it a lot. Larry Bird uses that shot a lot, too, but you don’t see it much anymore.

SLAM: There are a lot of great shots you don’t see much anymore. People used to have more individual trademarks, like Jamaal Wilkes’ funky jumper…

ENGLISH: Gervin’s finger roll, Kareem’s skyhook…even Bernard King’s jumper was kind of strange. There were a lot of unique things about out era. George Johnson and Rick Barry had the underhand free throws, which, by the way, Shaq should look into. I’m sure Rick would be glad to teach him.

SLAM: Well, why don’t more people try to copy some of those styles that worked so well?

ENGLISH: The game is not as pure as it used to be. Guys come into the league so young that they don’t learn the basic things that may help them later on. They don’t get the fundamentals that coaches can give in college. You might be able to score after a year or two, but there’s a lot more to learn.  There’s a maturation process involved in going to college. And like I said, I worked really hard on doing the little things, like following up my shot, which you don’t see a lot of young people doing today. Basic, simple things like that get lost, but they bring so much to you and your team. A lot of my points came from offensive rebounds.