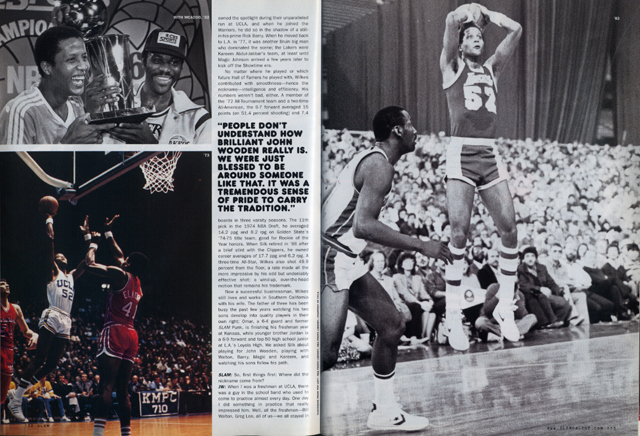 A California guy in every respect, Jamaal Wilkes played his entire college and NBA career in his home state. Wilkes also brought a lot of titles to California, winning two with UCLA and four with the Lakers. With a deadly accurate jumpshot and tough defense, Wilkes was an asset to every team he was on, so much so that John Wooden once called him the “ideal player.” In SLAM 79, the “ideal player” recapped his great career. –Ed.

If basketball success is ultimately defined by winning, then Jamaal Wilkes stands as one of the most successful players in the history of the game. He was a key member of the UCLA Bruins’ 1972 and ’73 NCAA title teams and a driving force in their untouchable 88-game winning streak. As a rookie with Golden State in ’74-75, he finished second in scoring and rebounding on a Warriors team that won the NBA championship. After three seasons by the Bay, he ended up in Los Angeles, where he would play the bulk of his 12-year career with the Lakers-and where the man known as “Silk” would play a vital role on three more NBA title teams.

That’s six rings, three Final Four trips and five NBA Finals appearances, and Wilkes earned every one of them. The man born Jackson Keith Wilkes-he was known as Keith until changing his name early in his NBA career-was unquestionably a star, but he was never the star of those Bruin, Warrior or Laker teams. His classmate Bill Walton rightly owned the spotlight during their unparalleled run at UCLA, and when he joined the Warriors, he did so in the shadow of a still-in-his-prime Rick Barry. When he moved back to L.A. in ’77, it was another Bruin big man who dominated the scene; the Lakers were Kareem Abdul-Jabbar’s team, at least until Magic Johnson arrived a few years later to kick off the Showtime era.

No matter where he played or which future Hall of Famers he played with, Wilkes contributed with smoothness-hence the nickname-intelligence and efficiency. His numbers weren’t bad, either. A member of the ’72 All-Tournament team and a two-time All-American, the 6-7 forward averaged 15 points (on 51.4 percent shooting) and 7.4 boards in three varsity seasons. The 11th pick in the 1974 NBA Draft, he averaged 14.2 ppg and 8.2 rpg on Golden State’s ’74-75 title team, good for Rookie of the Year honors. When Silk retired in ’86 after a brief stint with the Clippers, he owned career averages of 17.7 ppg and 6.2 rpg. A three-time All-Star, Wilkes also shot 49.9 percent from the floor, a rate made all the more impressive by his odd but undeniably effective shot: a wind-up, over-the-head motion that remains his trademark.

Now a successful businessman, Wilkes still lives and works in Southern California with his wife. The father of three has been busy the past few years watching his two sons develop into quality players in their own right: Omar, a 6-4 guard and former SLAM Punk, is finishing his freshman year at Kansas, while younger brother Jordan is a 6-9 forward and top-50 high school junior at L.A.’s Loyola High. We asked Silk about playing for John Wooden, playing with Walton, Barry, Magic and Kareem, and watching his sons follow his path.

SLAM: So, first things first: Where did the nickname come from?

JW: When I was a freshman at UCLA, there was a guy in the school band who used to come to practice almost every day. One day I did something in practice that really impressed him. Well, all the freshmen-Bill Walton, Greg Lee, all of us-we all stayed in the dorms and ate dinner together in the dining hall. And the guy from the band came up at dinner and said, “Keith, you play like…like silk! Smooth as silk!” All the guys got a kick out of that, so they started calling me “Silk.” Then Dick Enberg, who was just coming up at the time, heard the guys calling me that and started saying it on the air.

SLAM: As a high school star in the L.A. area in the late ’60s and early ’70s, UCLA had to be your dream destination.

JW: I was fortunate to have some options, and Southern Cal was very attractive, all the California schools. I even looked at a couple places in Pennsylvania, so I did seriously consider other schools. But of course, John Wooden kind of prevailed.

SLAM: You were part of the greatest dynasty in college history-those back-to-back 30-0 seasons, that 88-game winning streak, two of John Wooden’s 10 national titles. What was it like being a part of that program, and to play for Coach Wooden?

JW: People don’t understand how brilliant John Wooden really is. We were just blessed to be around someone like that. He’s an incredible human being, and just a brilliant coach. And the program, it got to a point where winning wasn’t enough. We almost had to win a certain way. But it was very special. It was a tremendous sense of pride to carry the tradition, or to try to.

SLAM: Can you ever see another time when one coach and one program can be that dominant for that long?

JW: I believe anything’s possible, but…no, I don’t. A lot of that has to do with John Wooden. Plus, the world’s so different. So few games were on television, and now every game is on television, so from a recruiting perspective it’s very different. Plus, for kids today, winning in college isn’t as important. It’s all about getting to the NBA.

SLAM: You and Bill Walton were classmates. How good was he in his prime?

JW: I had the good fortune to play with him for four years, and arguably in his prime, especially in college, he’s right up there with the best of them. I never played against Bill Russell or Wilt, and I played with Kareem in the NBA, but…Bill was just awesome. He was the only guy-and Wes Unseld came close-but the only guy who consistently could rebound the ball, turn in midair and outlet the ball so accurately. He loved to block shots, and he was a great passer, a great scorer, and a great competitor.

SLAM: Health-permitting, do you think Bill could’ve had a career like Kareem’s?

JW: It’s unfair to Kareem, because Kareem did it, you know what I’m saying? But Bill Walton had the competitiveness, the work ethic, the humility, that there’s no doubt in my mind. Unequivocally, yes.