He moved from the three-point line to the sidelines, but Reggie Miller still haunts fans of 90’s Eastern Conference teams to this day. From SLAM 139, Tony Gervino sat down with the Knicks’ Public Enemy No. 1 and talked Indiana, Madison Square Garden and, of course, haters.—Ed.

My relationship with Reggie Miller is not dissimilar to the coastline of Maine: cold and rocky and, depending upon which way the wind is blowing, more than a little fishy.

It’s obviously all my fault. No. 31 never asked for me to hurl insults at him, relentlessly. Never encouraged any of my misguided notions and never responded to my numerous volleys, all sent through the pages of SLAM Magazine back when I was Editor-in-Chief, all done with a singular goal: to unnerve him during that half-decade when he jabbed the New York Knicks and their fans with a pitchfork.

What a joke. The guy scored 25,279 points—another 2,972 in the Playoffs alone—and made more treys (2,560 in the regular season, 320 in the postseason) than anyone in history. He killed my Playoff hopes the way Michael Myers did chatty topless broads: in a variety of methods, but with a singular outcome. Although experts are split on this point, there’s no doubt in my mind Miller belongs in the Hall of Fame.

During the mid-’90s, Jordan may have been a more destructive force, but no one was more demoralizing to opponents and their fans than Reggie, who preened, pouted and taunted while taking defenders to school. The greatest pure shooter in NBA history? At the risk of being struck by lightning, I’d have to say that, too.

Stars like Bird, Magic and Karl Malone basked in the crowd’s love, even on the road. Reggie Miller, the anti-establishment’s poster boy, hit the court like a wrestling villain. All that was missing was the black cape and a taunting catchphrase.

My prominent memory of Miller is that of a spindly dervish, relentlessly spinning through multiple picks, ever circling and hoping to eventually make it to the three-point line with just a sliver of daylight. That is all he ever needed. A moment.

The highlights of Reggie’s career mirror the lowlights of my Knicks fandom. During Game 5 of the ’94 Eastern Conference Finals, for example, when he scored 25 points in the fourth quarter, while behaving like a cross between Mick Jagger and a rodeo clown.

Or in Game 1 of the ’95 EC Finals, when he scored 8 points in just under nine seconds, to beat the Knicks again. Imagine. Try and visualize hitting two treys and drawing a foul to shoot two free throws while counting up from zero. If you get to nine, you’ve gone too far.

In the ’98 Conference Finals, his Pacers gave Jordan’s Bulls all they could handle before succumbing in seven games, despite Reggie’s game-winner at the end of Game 4. And in ’00, in Game 5 of the first round of the Playoffs, he drained a 40-footer at the buzzer to send the conference-leading Nets to overtime, and nearly, to the brink.

Reggie always took the big shots for his team and hit many of them under duress. He hung up his Nikes in 2005 and flirted with a comeback the following season—and probably would’ve averaged a dozen—but ultimately decided to remain retired. For a guy who so clearly adored the bright lights, it was a surprisingly graceful decision.

He probably never understood why this grubby magazine from NYC described him with such vitriol. Then again, judging from our conversation, he probably didn’t much care at the time…or even now.

I get the feeling that Reggie Miller, who probably lives in a nicer place than I have even seen on TV, has larger concerns. Like covering the NBA on TNT, or maybe counting the reported $110 million that he earned during his career. A career that, despite all the years that have passed since either the Pacers or Knicks were relevant, haunts me to this day.

SLAM: What was your reaction to the documentary Winning Time, which chronicled your intense relationship with the New York Knicks?

SLAM: I think the 8 points in nine seconds on the Knicks in the ’95 Eastern Conference Finals was the most devastating turn of events in the history of basketball. Do you agree?

RM: Well, obviously, when you’re in the moment you don’t think about that stuff, like whether it was the greatest, but now that I have a chance to reflect back on it, you know, I don’t think I could duplicate that same feat if I was in a gym by myself. For me, and especially when I played, it was all about being in the moment,

SLAM: What about New York brought that out in your game?

RM: It was being on the biggest stage, and to me playing against the bullies on the block, which at the time were the New York Knicks. I mean, you’re playing in the Mecca of basketball in Madison Square Garden and you always wanted to bring your best. And I always tried to do that extra thing to leave the fans walking away saying, “That guy is great.”

SLAM: You know, the negative crowd emotion wreaked such havoc on Alonzo Mourning, especially in the Playoffs. Yet whenever you came into the Garden, it seemed to fuel you.

RM: I loved it. [Sighs.] I loved it so much. When they would scream and yell. Awww, it was so good.

SLAM: I think the word I would use is “relish.” You seemed to relish making the crowd miserable.

RM: I loved it, Tony. There was nothing like playing on the road, in a hostile environment. Twelve guys versus 20,000 fans. [Sighs]. If there is any one thing I do miss, it’s playing in the Garden. And having the fans yell and scream and chant.

SLAM: Do you see any of that attitude in today’s players? Anyone who would welcome that kind of attention?

RM: Well, only maybe one comes to mind. Because you’ve gotta have the game to back it up. It would probably be Kobe. I think Kobe can go into anyone’s backyard and he would just love to stick the dagger in. Now I don’t know if he would be as demonstrative as I was—you know, taunting the crowd and things like that. But if anyone would love to stick it to the opposing team, that’s who it would be.

SLAM: One thing you said that struck me was when you said, “I didn’t mind wearing the black hat.” It’s a pretty bold thing to say. But were the Pacers the first time you wore it? Because I don’t remember you being Public Enemy No. 1 when you were at UCLA.

RM: [Laughs.] Well, I wasn’t exactly a great guy in college either. A lot of the things I did were thankfully before the Internet age. But, you know, I think I was always filling the underdog role. I think I always wore the black hat. There were plenty of guys that wore the white hat.

SLAM: Did anything that was said about you hurt your feelings?

RM: Nooo. And I hope nothing I ever said to people hurt their feelings.

SLAM: When I was at SLAM we said some pretty unkind things about you. And by we, I should say, I mean “me” in particular.

SLAM: Yeah, I don’t know if you’d heard that.

RM: [Laughs.] Like what? What could you have possibly said?

SLAM: Well…you know, the typical “choker, flopper” stuff. Pretty juvenile. But is there anything you heard from us, from fans or anyone else that you thought was over the top?

SLAM: Maybe not your family.

RM: Well you didn’t saying anything about my family, right?

SLAM: Ummm. Well, I did run the photo of you and Cheryl at the prom.

SLAM: I’m a Knicks fan and thought that it would unnerve you. I know it sounds silly, but I thought I was helping.

RM: You were actually helping me. [Laughs.] So thank you.

SLAM: I just thought that I was accomplishing something by saying it.

RM: [Laughs.] And how did that work out for you?

SLAM: Well, the only thing I think I accomplished was preventing me from getting a job at Sports Illustrated.

SLAM: Thanks, Reggie. So your rivalry with New York was epic. Would you agree there’s nothing like it in today’s game? 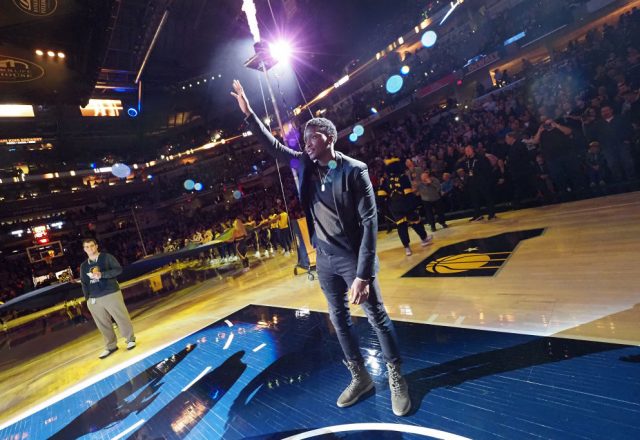