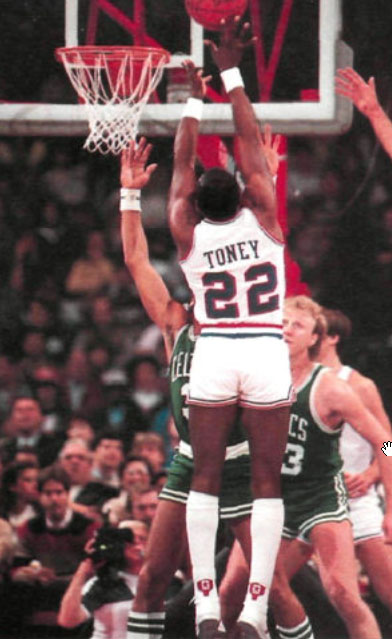 While the current NBA players are fighting for their rights in the form of this excruciating, seemingly never-ending lockout, we figured now was a great time to look back on one of the most unheralded pro bballers in history: former Philadelphia 76ers guard Andrew Toney. The feature below was originally published in SLAM 38.—Ed.

It started before he was born, but he was born because of it. For it. His life would come to end it. Close it. Still, for those who weren’t there to witness it, he remains a simple footnote that, at the time, was bigger than life itself.

“Andrew who?”—a young’n on the basketball court on the corner of West Fourth and the Avenue of the Americas. The Cage, NYC. March ‘99.

I first heard about Andrew Toney in ‘79. I was a sophomore in high school, and a friend from Louisiana whom I played against in a few tournaments swore that there were ball players in “the dirty” (even though back then we just called the South “country”). While I was riding the Mark Aguirre/Isiah Thomas bandwagon, my mellow (that’s what we called cats back then) kept telling me about this dude at SW Louisiana State who could hoop the both of them. I thought he was on drugs. But I listened. Because, ya know, you never know…

In ‘80 the Philadelphia 76ers needed help. Even though the previous year they had made it past Boston in the Conference Finals and then lost to the Lakers in six in the Finals, they needed someone to help Julius. Erving’s 27 ppg were 13 points higher than the 14.7 and 13.8 Darryl Dawkins and Doug Collins were bringing to the table as the teams second and third leading scorers, respectively. Plus, Larry Bird had gotten one year of professional basketball under his waistband, and everyone in Philly knew the Celtics were going to come for the crown. That next year, the Celtics beat the Sixers by one (91-90) in the seventh game of the Easter Conference Finals. Despite the fact that Boston went on to win the NBA title, the rivalry between the 76ers and the Celtics just shifted greenwards. Illadelphia couldn’t have that. Once again, Philly needed some help.

They had a rookie on that ‘80-81 team that, surprise, dropped 35 points in a game that season, the only Sixer outside of Doc to top 30 all year. So coach Billy Cunningham knew, as he repeated that one point over and over in his head during the off-season, that he had an answer. That someone on his roster was capable of giving him that one extra basket. He knew. It was just a matter of making the player know it too.

This is where Andrew Toney comes into the story. Over the first 30 years of the NBA, the Celtics and the Sixers had built an intense rivalry that The Sporting News once deemed “the greatest in the history of sports.” Chamberlain vs. Russell. Hal Greer vs. Bob Cousy. Ed Macauley vs. Joe Fulks before them. In the 80’s, Erving and Bird were thrust into the forefront. But it was Toney—the kid from “the Magic,” Birmingham, AL, whom my mellow had told me was the shiznit while Toney was schoolin’ cats in the SWAC—who was born to put an end to the Boston massacres. To eliminate Celtic pride: his calling, his mission, his purpose. Philly needed someone to beat Boston. Someone to give them that one extra point. An assassin. Andrew Toney was No. 22 with a bullet.

Smell the net burn of leather. Sniff. His shot was straight, literally. Quick and stiff. No movement. It was so mechanically correct, it looked almost deranged. But, it went in. Often. In the projects and playgrounds it looked beautiful. But to the professionals, still, something was wrong. At least, by sight. “When I first got a good look at it,” then-Southwest Louisiana State University coach Bobby Paschal said, “it gave me a pause. But I figured it was too late to change it.”

Andrew Toney used to come off picks with eyes wide shut. Erect. Sanitary socks pulled up to just below his knees, signature Converse Dr. J’s tied tightly, wristbands. He spent the first two years of his career learning, coming off of the bench to replace Collins, Maurice Cheeks or Lionel Hollins. His assignment: introduce the world to the term “instant offense.” Before Andrew Toney came along, it had no name, just effects. He gave the rim-clipper an identity, a platform. His internal challenge was beyond hitting jumpers—he would try to score without disturbing the net.

Yet, still, others yearned for something perfect. The end results, not enough. “Most players shoot the ball over their head, but Andrew shoots it from in front of his face,” Cunningham told the Philadelphia Inquirer in ‘81. “Frankly, that concerned us.” To which Toney replied, “They can say what they want, but I’m never going to change my shot. I learned it in the schoolyard. The ball goes in enough, don’t it?”

Andrew Toney entered the NBA misunderstood. He was a quiet young man from down south, who, because of his confidence, was often mistaken for “sullen.” He had that gift that not many basketball players today have of putting the ball in the basket from 10-10-321 distance. He had the distinction of being, when the left SWL, the 13th all-time leading scorer in NCAA history. That alone proved the 6-3 Toney was on some Jerry Rice shit (who attended the SWAC’s Mississippi Valley State and set a few records of his own).

Showing that he was Philly’s answer to Boston’s jinx before the Sixers even realized it, Toney dropped 32 points against the Pacers making then-Indy coach Jack McKinney claim Toney was “the best rookie I’ve ever seen.” To give Boston early insight, he averaged almost 20 ppg in his first playoff series against the team by which is career would be judged.

As his second season in the NBA began to seep in, Toney got more comfortable in his role as “the hired gun.” The Sixers wanted him to shoot, wanted him to be the next Freddie Brown or the first Vinnie Johnson. He dropped a 46-point game for ‘em early on, just to keep other teams in the league honest. Philly was getting psyched for Boston; they wanted the crown back. They started calling Toney “the Boston Strangler.”

The legend of Andrew Toney began around 11 p.m. on Friday, May 21, ‘82. The Sixers had just lost to Boston in Game 6 of the Eastern Conference Finals 88-75. They had blown a 3-1 lead in the series, and now had to do the impossible: beat Boston, Game 7. Do or die. Win or go home. As they entered the Boston Garden that Sunday, five white men appeared in white sheets. on the back of the sheets were the names Havlicek, Russell, Nelson, Sanders and Jones, the “ghosts of Celtics past” who always used to eliminate the Sixers “bakndaday.” “That’s when I got scared,” Julius Erving said at the time. “I thought it was the Klan.”

But Toney wasn’t scared. Never. He knew what was on the line—he was born for this. Midway through the first quarter, ML Carr slapped Toney in the face while trying to blcok his shot. Toney was 7 for 31 in games 5 and 6 and needed the extra incentive. When his shot dropped in, Toney just looked at Carr, almost as if to say “thank you.” From then on, Toney was unconscious. He continued to drop more. Not just on Carr, but on Danny Ainge (who would later become Toney’s personal rival) and Bird, too. That awkward, erect jump shot was unstoppable. He had 16 by halftime, 34 by game’s end. That “one point” the Sixers were looking for, Toney delivered on this day. Bird just sat on the court at the end. Dazed but not confused. He knew the Sixers had found the answer. And this time, he couldn’t do a damn thing about it.