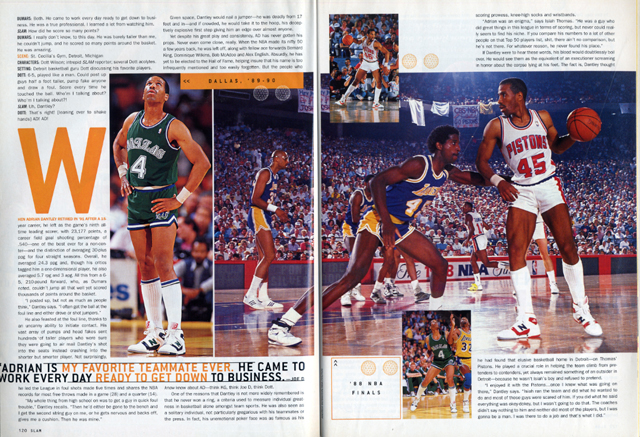 What do you know about Adrian Dantley? Maybe that he was a great scorer in the ’80s or that he had some terrific seasons for Utah and Detroit? Chances are your memory might be a little hazy when it comes Dantley. He’s one of those NBA players that rarely gets his due. Back in SLAM 41, we took a look inside the career of one of the NBA’s best scorers. –Ed.

Characters: Garnett, his man Freaky and one SLAM editor.

Setting: Garnett is discussing the starting five on his all-time squad.

KG: Guess who I put at the four?

KG: Tell me who this is?

[Does his best Dantley impersonation.]

KG: Again… [Goes through motions, calling for pass in the post, getting it, wiping sweat off brow…] Who was that? If you know basketball, you would know who it is.

Freaky: But you throwing me off with this.

KG: At the four? 6-5 with a little wind-up shot…It’s Adrian Dantley and he’ll pump-fake you all day long.

Scene: The inner bowels of the Auburn Hills Palace.

Setting: Dumars trying to sneak in to a Pistons game, intrepid reporter trying to pin him down for a quote. Dumars moves quickly, talking in clipped words as he walks. As a player, he often used the back exit of the locker room to escape reporters’ questions, and as a Detroit executive, he remains a moving target. Until you say the words, “Adrian Dantley.” Then Dumars stops and smiles.

Dumars: Adrian is my favorite teammate ever.

SLAM: As a person or a player?

Dumars: Both. He came to work every day ready to get down to business. He was a true professional. I learned a lot from watching him.

SLAM: How did he score so many points?

Dumars: I really don’t know, to this day. He was barely taller than me, he couldn’t jump, and he scored so many points around the basket. He was amazing.

When Adrian Dantley retired in ’91 after a 15-year career, he left as the game’s ninth all-time leading scorer, with 23,177 points, a career field goal shooting percentage of .540-one of the best ever for a non-center-and the distinction of averaging 30-plus ppg for four straight seasons. Overall, he averaged 24.3 ppg and, though his critics tagged him a one-dimensional player, he also averaged 5.7 rpg and 3 apg. All this from a 6-5, 210-pound forward, who, as Dumars noted, couldn’t jump all that well yet scored thousands of points around the basket.

“I posted up, but not as much as people think,” Dantley says. “I often got the ball at the foul line and either drove or shot jumpers.”

He also feasted at the foul line, thanks to an uncanny ability to initiate contact. His vast array of pumps and head fakes sent hundreds of taller players who were sure they were going to air mail Dantley’s shot into the seats instead crashing into the shorter but smarter player. Not surprisingly, he led the League in foul shots made five times and shares the NBA records for most free throws made in a game (28) and a quarter (14).

“My whole thing from high school on was to get a guy in quick foul trouble,” Dantley recalls. “Then he’d either be gone to the bench and I get the second string guy on me, or he gets nervous and backs off, gives me a cushion. Then he was mine.”

Given space, Dantley would nail a jumper-he was deadly from 17 feet and in-and if crowded, he would take it to the hoop, his deceptively explosive first step giving him an edge over almost anyone.

Yet despite his great play and consistency, AD has never gotten his props. Never even come close, really. When the NBA made its nifty 50 a few years back, he was left off, along with fellow ace forwards Bernard King, Dominique Wilkins, Bob McAdoo and Alex English. Absurdly, he has yet to be elected to the Hall of Fame, helping insure that his name is too infrequently mentioned and too easily forgotten. But the people who know know about AD-think KG, think Joe D, think Dott.

One of the reasons that Dantley is not more widely remembered is that he never won a ring, a criteria used to measure individual greatness in basketball alone amongst team sports. He was also seen as a solitary individual, not particularly gregarious with his teammates or the press. In fact, his unemotional poker face was as famous as his scoring prowess, knee-high socks and wristbands.

“Adrian was an enigma,” says Isiah Thomas. “He was a guy who did great things in this league in terms of scoring, but never could really seem to find his niche. If you compare his numbers to a lot of other people on that Top 50 players list, shit, there ain’t no comparison, but he’s not there. For whatever reason, he never found his place.”

If Dantley were to hear these words, his blood would doubtlessly boil over. He would see them as the equivalent of an executioner screaming in horror about the corpse lying at his feet. The fact is, Dantley thought he had found that elusive basketball home in Detroit-on Thomas’ Pistons. He played a crucial role in helping the team climb from pretenders to contenders, yet always remained something of an outsider in Detroit-because he wasn’t Isiah’s boy and refused to pretend.

“I enjoyed it with the Pistons…once I knew what was going on there,” Dantley says. “Isiah ran the team and did what he wanted to do and most of those guys were scared of him. If you did what he said everything was okey-dokey, but I wasn’t going to do that. The coaches didn’t say nothing to him and neither did most of the players, but I was gonna be a man. I was there to do a job and that’s what I did.”

To this day, Dantley swears he was traded in the middle of the ’88-89 season because Isiah preferred the company of his high school pal, Mark Aguirre. “I know he was behind the trade,” Dantley says. “It’s not a question; it’s a fact.”

Has Dantley ever discussed this with Thomas, now that more than a decade has passed?

“No, I’ve never even seen him,” Dantley says. “He’s not gonna come near me. That’s the worst thing he could do. Anyhow, I know he denies it. But it’s true.”

Indeed, given a chance, Thomas flatly and inconclusively denies that he orchestrated Dantley’s trade. “Go back and look in the books,” Thomas says. “When that trade was made, we were in second place in our division, six games behind the Cavaliers. After Aguirre came, we went 37-4 and went from a team struggling to score 92 points to a team averaging almost 103. And we got our ring. So it was a good trade, but it wasn’t my decision. I was a player, not the GM.”