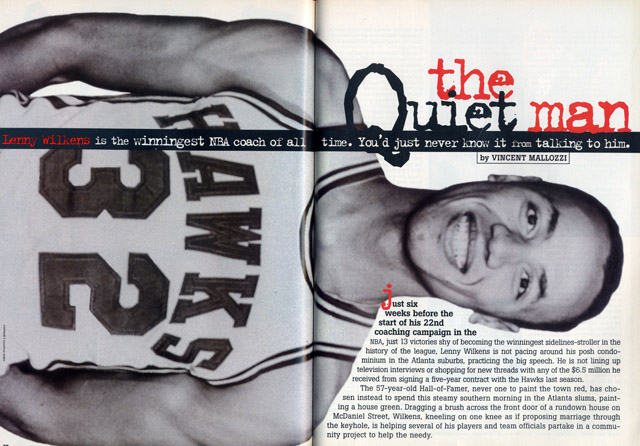 From SLAM 6, this Lenny Wilkens feature is spot-on, profiling a man who valued hard work over headlines. Why now? Because with high-profile coaches like Pat Riley and SVG battling in the news, now’s as good a time as ever to appreciate a guy like Lenny, who just got it done.–Ed.

Just six weeks before the start of his 22nd coaching campaign in the NBA, just 13 victories shy of becoming the winningest sidelines-stroller in the history of the league, Lenny Wilkens is not pacing around his posh condominium in the Atlanta suburbs, practicing the big speech. He is not ling up television interviews or shopping for new threads with any of the $6.5 million he received from signing a five-year contract with the Hawks last season.

The 57-year-old Hall-of-Famer, never one to paint the town red, has chosen instead to spend this steamy southern morning in the Atlanta slums, painting a house green. Dragging a brush across the front door of a rundown house on McDaniel Street, Wilkens, kneeling on one knee as if proposing marriage through the keyhole, is helping several of his players and team officials partake in a community project to help the needy.

“Got to get it done,” says Wilkens, dabbing his bristles into thick green paint. “The woman who lives here has nowhere to go.”

As he wipes the beads of perspiration from his forehead and wisks up a ladder in the direction of Hawks General Manager Pete Babcock (who has been drafted for this project to handle all plastering duties), it becomes apparent that Wilkens is doing what he was always done best—working hard. And, as has become his style since the days when Richard Nixon was in the white House and $100,000 was an obscene salary by NBA standards, Wilkens is laboring towards his goal quietly and without much fanfare.

“Just because I arrived at a certain status, does that mean I shouldn’t give back or I shouldn’t be reachable or touchable?” Wilkens asks. “People identify with you and they like that. They want to see you out there. I have no problem with that. I’m proud of the fact that I can talk to anyone at any level in life.”

Wilkens, who grew up a poverty child in Jackie Robinson’s Brooklyn and is now living life as a rich man in Ted Turner’s Atlanta, has no problem painting a stranger’s house on his day off because he understands the value of hard work, the importance of dedication and the significance of knowing when to teach and when to be taught. And it is those very qualities that have made him one of the greatest coaches in NBA history. Statistically, there has never been anyone better.

The night he won No. 939, finally passing Red Auerbach, assistant coach Dick Helm handed him a cigar, which Lenny lit, in testament to Auerbach. And although Lenny looked kind of goofy with it in his mouth, taking only a few puffs before handing it off, it was a classy move from a classy individual.

“I don’t get too wrapped up in awards,” Wilkens says. “But they’re nice because you want to be as good as your peers. You’re competing for recognition among them. But to me, all the awards that come with setting the record for most coaching victories is significant because it shows how far you’ve come, and it can be shared with all the people who’ve helped your life along the way.”

After years of winning as both player and coach in relatively obscure media markets like St. Louis, Portland and Cleveland, Wilkens has finally settled under a spotlight bright enough to show the world his vast knowledge of the game of hoops. In Atlanta, he is the perfect fit between the blood-vessel-popping Mike Fratello, and the lifeless Bob Weiss, neither of whom were able to make the Hawks soar to championship heights.

“My first few years under Mike Fratello, we were kind of known as a defensive team, and then he left and Bobby Weiss came and we weren’t known for anything,” says Jon Koncak, who’s played center for the Hawks for the past 10 seasons. “We weren’t good on offense, we weren’t good on defense, and some nights we were just terrible. We were doing too many individual things. If Dominique Wilkins or Kevin Willis had a good night, we won. If they didn’t, we lost.

“So obviously, the biggest thing Lenny had to do for us was to give us an identity,” Koncak continues. “What are the Hawks? What are we known as? And we started by becoming a great defensive team. On offense, he tried to get us to move the ball and do some of the things that good teams do, and everything just caught on. Lenny brought a lot of excitement back to the city and to the franchise. Now we’re known for something.”

After one full season in Atlanta, Wilkens guided the Hawks to a 57-25 mark, which tied the franchise record and topped the Eastern Conference. He turned decent players like ex-Net Mookie Blaylock, and Craig Ehlo—who played for Wilkens in Cleveland—into overachievers. And he did not let the departure of Dominique Wilkins and the short stay of Danny Manning disrupt the winning flow of the team.

Despite elimination by Indiana in the second round of the Playoffs, respectability returned to a perennially disappointing franchise, one that had been suffering through a lack of attendance in recent years. In recognition of his importance to the organization, Wilkens was voted Coach-of-the-Year. It really was no contest.

Despite everything he had achieved as a coach before coming to Atlanta—including the Seattle SuperSonics’ ’79 NBA Championship—Wilkens was still greeted with skepticism by some fans who’d watched his laid-back style over the years.  Poker-faced and arms folded, whispering to officials near the end of the bench instead of screaming at them, diagramming plays on the clip-board like a college professor writing scientific formulas on the chalkboard, Wilkens had gained a reputation as someone who didn’t try as hard as he could and didn’t care enough about winning or losing. But to the people who really know him, well, that’s just the coach’s style.

“The quiet approach and the quiet demeanor that you observe is just Lenny’s way of dealing with people,” Babcock says. “But in actuality, he is very demanding of himself and his players. That quiet demeanor you see on the exterior is not at all what’s going inside of him. He is an extremely complex, extremely well-rounded individual. One of the first things I was impressed with when I interviewed Lenny for the job was his concern for people, his concern for the total player and not just wins and losses. He cares about how players mature and develop and how they’re educated. I knew he was the right man for the job as soon as he sat down and started talking to me.”

The way Andrew Lang explains it, Wilkens’ message has come over loud and clear. “There’s a lot of power in Lenny’s restraint, and we as players understand that,” says Lang, now in his second year with the Hawks. “He’s a teacher who carries his head up and possesses a great deal of dignity and pride. There are no excuses, no shortcuts, just a simple hard day’s work, and when he brings that to the table, you have to put away your cellular phones and fancy cars and your big contracts and just go play basketball.”

Lenny Wilkens has been playing basketball his way since he walked on the varsity team in his senior year at Boys High School in Brooklyn. He went on to Providence and averaged 14.9 ppg during his career with the Friars. The scrawny, 6-1 point guard with the quick lefthanded dribble and uncanny ability to create off the dribble, was named Most Valuable Player in the 1960 National Invitation Tournament.

A first-round draft pick of the St. Louis Hawks in 1960, Wilkens, like his Brooklyn Dodgers baseball hero, Jackie Robinson, had to deal with his share of racism from fans and players around the league. Like Robinson, Wilkens was able to rise above the distractions, quickly becoming one of the league’s marquee players. He was mostly noted for his one-handed set-shots, and his left-handed running hooks and his ability to slither through traffic and create layups. In five of his eight seasons with St. Louis, Wilkens was voted to the All-Star team. In 15 seasons overall, he finished with 17,772 points (16.5 per game), 7,211 assists and made 8 All-Star appearances.