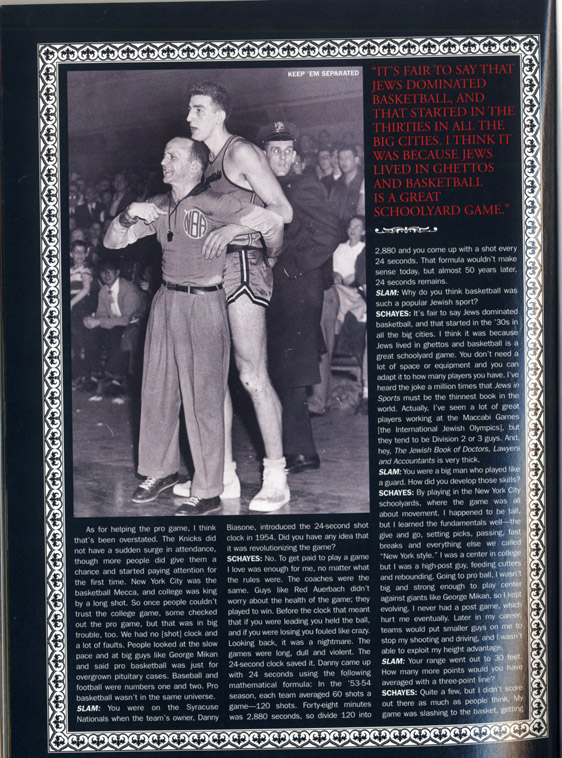 Back in SLAM 65 Alan Paul got the chance to interview, as he put it, the “greatest Jewish basketball player of all-time.” Adolph “Dolph” Schayes was a 6-8 forward with a shooting guard’s range and stroke. A flat out scorer, Schayes retired as the NBA’s all-time leader in points scored.—Ed.

Dolph Schayes is the greatest Jewish basketball player of all time. Now stop snickering and learn something here—my tribe was a dominant basketball force in the first half of the 20th century. Though the golden era of Jewish hoops came before the NBA’s 1946 formation, we were well-represented in the League’s early years. Still, Schayes stood out because he was a true star, one of the best players of the NBA’s first 15 years as demonstrated by his selection to the NBA’s 25th and 50th Anniversary Teams.

A 6-8, 220-pound forward, the former NYU All-American played in 12 straight All-Star games from ’51 to ’62. He was an annual mainstay among League leaders in points and rebounds, averaging 18.5 ppg and 12.1 rpg over 16 seasons, including a six-year run of 20 ppg or better. He also led the Syracuse Nationals to three Finals appearances and the ’55 title. An iron man whose durability was as remarkable as his skills, Schayes played in a then-NBA record 764 straight games over a 10-year span.

“He once broke the wrist of his shooting hand and had the doctor leave his fingers out of the cast and never missed a game,” recalls Bill Russell. “He was completely tenacious, and he worked as hard as anyone ever could have.”

Schayes’ opponents were forced to work equally hard or risk getting embarrassed, because he never quit moving on the court, driving defenders to distraction and exhaustion, a style he sums up simply: “Basketball is a game of movement, so move!”

Schayes had a high arcing set shot with deep range and possessed an agility and grace rare for big men of the era, driving to the basket and feasting at the free-throw line. He retired in 1964 as the NBA’s all-time leading scorer, totaling 19,247 points, including 809 as a rookie during Syracuse’s inaugural season in the old NBL. He went on to coach the 76ers—winning NBA Coach of the Year honors in ’66—and the Buffalo Braves before becoming the NBA’s director of officiating for three seasons. His son Danny also played 18 seasons in the League. Inducted into the Naismith Hall of Fame in 1972, Dolph Schayes, now 74, is a businessman in Syracuse.

SLAM: In 1951, a point-shaving scandal rocked New York college basketball and helped the NBA get its footing. What do you recall about that?

SCHAYES: It was shocking. I knew a couple of the guys very well and had played a lot of ball with them. They were good kids from good families and I never could understand how they could have stabbed the game they loved in the back. College basketball in New York City never fully recovered. As for helping the pro game, I think that’s been overstated. The Knicks did not have a sudden surge in attendance, though more people did give them a chance and started paying attention for the first time. New York City was the basketball Mecca, and college was king by a long shot. So once people couldn’t trust the college game, some checked out the pro game, but that was in big trouble, too. We had no [shot] clock and a lot of faults. People looked at the slow pace and at big guys like George Mikan and said pro basketball was just for overgrown pituitary cases. Baseball and football were numbers one and two. Pro basketball wasn’t in the same universe.

SLAM: You were on the Syracuse Nationals when the team’s owner, Danny Biasone, introduced the 24-second shot clock in 1954. Did you have any idea that it was revolutionizing the game?

SCHAYES: No. To get paid to play a game I love was enough for me, no matter what the rules were. The coaches were the same. Guys like Red Auerbach didn’t worry about the health of the game; they played to win. Before the clock that meant that if you were leading you held the ball, and if you were losing you fouled like crazy. Looking back, it was a nightmare. The games were long, dull and violent. The 24-second clock saved it. Danny came up with 24 seconds using the following mathematical formula: In the ’53-54 season, each team averaged 60 shots a game—120 shots. Forty-eight minutes was 2,880 seconds, so divide 120 into 2,880 and you come up with a shot every 24 seconds. That formula wouldn’t make sense today, but almost 50 years later, 24 seconds remains.

SLAM: Why do you think basketball was such a popular Jewish sport?

SCHAYES: It’s fair to say Jews dominated basketball, and that started in the ’30s in all the big cities. I think it was because Jews lived in ghettos and basketball is a great schoolyard game. You don’t need a lot of space or equipment and you can adapt it to how many players you have. I’ve heard the joke a million times that Jews in Sports must be the thinnest book in the world. Actually, I’ve seen a lot of great players working at the Maccabi Games [the International Jewish Olympics], but they tend to be Division 2 or 3 guys. And, hey, The Jewish Book of Doctors, Lawyers and Accountants is very thick.

SLAM: You were a big man who played like a guard. How did you develop those skills?

SCHAYES: By playing in the New York City schoolyards, where the game was all about movement. I happened to be tall, but I learned the fundamentals well—the give and go, setting picks, passing, fast breaks and everything else we called “New York style.” I was a center in college but I was a high-post guy, feeding cutters and rebounding. Going to pro ball, I wasn’t big and strong enough to play center against giants like George Mikan, so I kept evolving. I never had a post game, which hurt me eventually. Later in my career, teams would put smaller guys on me to stop my shooting and driving, and I wasn’t able to exploit my height advantage.

SLAM: Your range went out to 30 feet. How many more points would you have averaged with a three-point line?

SCHAYES: Quite a few, but I didn’t score out there as much as people think. My game was slashing to the basket, getting fouled and making three-point plays. But I hit enough deep shots to keep them honest and make them come out. The real secret to my success was I could shoot with either hand. Ironically, I became ambidextrous as a result of breaking my right hand. I kept on playing with a cast and had no choice but to rely on my left, which changed everything. Every clinic I’ve ever done, I tell the kids, “Go left, young man.” Tie your right hand behind your back, cover it with a newspaper—do anything to immobilize it. Learn to use your weak hand and deny your man his strong hand and you can go far in this game.

SLAM: You were known for your practice habits and incredible work ethic.

SCHAYES: I always stayed on before and after practice. I just think that if you want to excel at anything, be it basketball, dance or the piano, you need to practice a lot. As for the work ethic, I’m just the kind of guy who takes what he does seriously. I never missed a day of school, I’ve rarely missed work and I played all those straight games; my streak only ended when I broke my cheekbone.

Guys hated to play against me because my stock in trade was constant movement. I was quick but not fast, so I would move my defender into picks, from one end of the court to another and wear him out until I had him tired and off guard. And I had an excellent running shot and great anticipation. I always knew where the ball was and had a good idea of where it was going, but I never stopped and thought about it; it was all instinctual, which I developed from playing so much. You can’t think or you ruin your game. 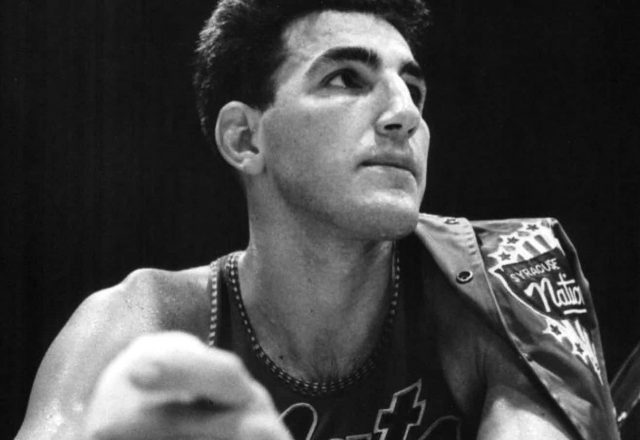 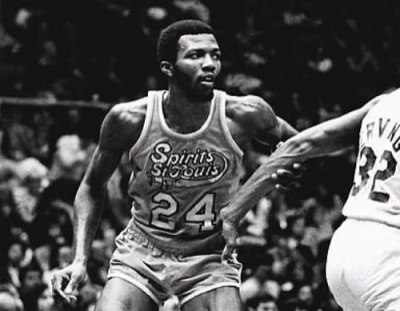 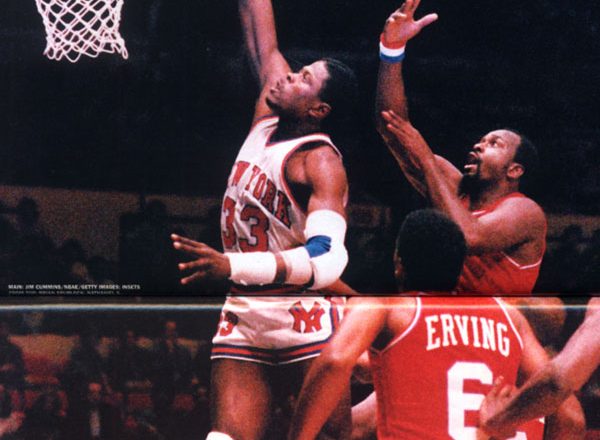 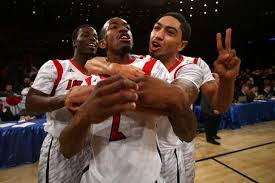