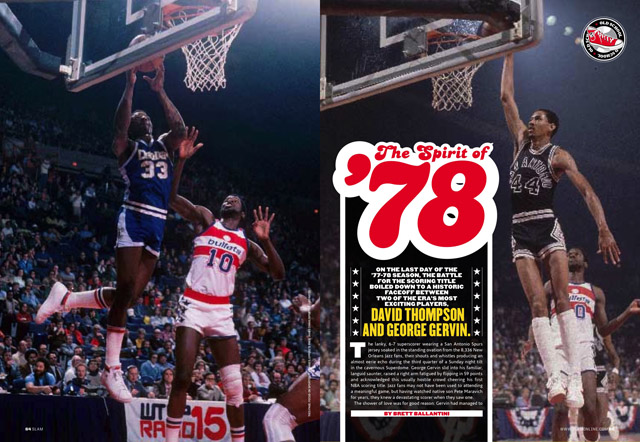 We believe the San Antonio Spurs could’ve definitely used a young George Gervin this week, as they fell to the Memphis Grizzlies in the first round of the ’10-11 Playoffs. We’re also sure the recently ousted Denver Nuggets would have gladly accepted the services of a 24-year-old David Thompson. But that’s all fairy tale. What is real, was the epic close to the ’77-78 season that featured Gervin and Thompson vying for the League’s scoring title. With the help of Gervin and Thompson’s first-hand accounts, Brett Ballantini created a classic piece for SLAM 115 that you can view here today.—Ed.

The lanky, 6-7 superscorer wearing a San Antonio Spurs jersey soaked in the standing ovation from the 8,336 New Orleans Jazz fans, their shouts and whistles producing an almost eerie echo during the third quarter of a Sunday night tilt in the cavernous Superdome. George Gervin slid into his familiar, languid saunter, raised a right arm fatigued by flipping in 59 points and acknowledged this usually hostile crowd cheering his first NBA scoring title. Jazz fans may not have been used to attending a meaningful game, but having watched native son Pete Maravich for years, they knew a devastating scorer when they saw one.

The shower of love was for good reason: Gervin had managed to hold off a furious, 73-point onslaught by David “Skywalker” Thompson on the season’s final day, in the race for the NBA scoring title.

Or so the Iceman thought.

“I got nervous,” Gervin admits. “I thought my math was off. My sweat hadn’t even dried when I asked back in.”

Gervin threw down a slam and added one of his silky jumpers to push his game total to 63 points in only 33 minutes, marking his victory in the scoring title race by 0.06 points per game, still the slimmest margin in basketball history.

Thompson, greeted back home in Denver by a crowd of 300 at Stapleton Airport and still flush with having scored the most points in a single game in NBA history outside of Wilt Chamberlain, hadn’t unlocked his front door before his seemingly secure scoring title slipped away.

He would never get so close again.

“Defend George Gervin?” asks an incredulous Thompson. “I gave away three, four inches to him and he was quick as a cat. He had a smooth release and the softest delivery in the game. And the finger roll? George didn’t miss.”

Gervin laughs at Thompson’s praise. “Inches? Hey, talk about the 15, 20 pounds I gave up [to Thompson]. He knew how to use his body to keep me off-balance. Don’t let him fool you. David wasn’t just a leaper. He was quick, and he could get physical.”

Gervin is still shaking his head. “Three inches. Guy could pick a penny off the top of the backboard, and he’s talking about inches.”

Thompson was not used to finishing second. His North Carolina State Wolf Pack finished 30-1 and won the ’74 National Championship. The next year he became the first, and only, NBA No. 1 Draft choice not to sign, instead joining the ABA’s Denver Nuggets and averaging an enormous 26.0 points on .515 shooting, 6.3 rebounds, 3.7 assists, 1.6 steals, and 1.2 blocks for the 60-win Nugs. He then took the NBA by storm in 1976-77, earning All-NBA First Team honors and finishing fourth in scoring at 25.9 ppg.

Gervin’s road to scoring stardom was considerably bumpier. He played only one full season at nondescript Eastern Michigan University, dominating with 29.5 ppg on .594 shooting and 15.3 rpg. He left school and tried out with the ABA’s Virginia Squires, hitting 22 of 25 three-pointers in drills and getting inked to a contract without the Squires ever having seen him play competitively.

In the ABA, Gervin was initially overshadowed by teammate Julius Erving, but when Gervin was dealt to the San Antonio Spurs midway through his second season, he became an All-ABA and All-Star constant. Still, at the dawn of the 1976 merger between the NBA and ABA, Gervin’s Spurs were weaker than Denver and didn’t garner the attention of the higher-flying Nuggets. Worse, since Gervin joined the Spurs, San Antonio had been ousted in the first round of the Playoffs every season, including ’76-77, when the 44-38 Spurs got dropped in two games by the Boston Celtics.

One season later, the Spurs and Gervin found their groove.

“Now, let me tell you about David Thompson’s jump shot,” Gervin says. “His drives were just scary. You don’t think a 6-4 guy can scare you in the paint? Nobody wanted to get in David’s way.”

It seems that both superscorers were too easily overlooked on the defensive end. In Thompson’s eyes, “George had the reputation of a guy who could fill it up, period. But he was a very underrated defender. As much as a 6-7 guy could get you to forget him, as soon as you relaxed, boom, there he was for a block, or misdirecting the action somehow.”

Gervin is second all-time among shooting guards in blocked shots, but he doesn’t remember getting many on Thompson. “His pull-up off the break or a pick was unstoppable. He had arc, you just waved at it and waited for it to come down. It was a double insult—you couldn’t defend the shot, and it almost always went in.”

Both Denver and San Antonio had reason to relish the ’77-78 season. The Nuggets made a key acquisition, point guard Brian Taylor, to steer a Playoff machine that featured two future Hall of Famers in Thompson and center Dan Issel, as well as perennial All-Defensive ace Bobby Jones. With Larry Brown at the helm, the Nuggets were poised to break through after being upset by the Portland Trail Blazers in the ’77 Playoffs.

Denver jumped out to a fast start, using winning streaks of seven, five and 10 games to hit a mark of 28-13 by mid-January. Taylor eventually defected from Denver in a contract dispute, and the Nuggets finished 20-21 the rest of the way. In San Antonio, the circumstances were reversed. Early injuries to backcourt cogs James Silas, Mike Gale and George Karl led to a 19-17 start. From there, the Spurs lost consecutive games only twice more, streaking to a 33-13 finish.

Both teams made the Playoffs, and both would again disappoint once there. The Spurs repeated their first-round knockout, while the Nugs won a seven-game thriller against the Milwaukee Bucks but were eventually set back by Lenny Wilkens’ miracle Seattle
SuperSonics. The teams’ postseason flops only make the events of April 9 all the more significant today.

Thompson had been chasing Gervin for the scoring crown throughout the season, and with 10 games remaining he trailed Ice by nearly a full point, 27.3 ppg to 26.5. Thompson was coolly consistent in his scoring, notching at least 15 points in every game that season. But it would take something extraordinary to surpass the Iceman.

With one game remaining in the season, not much had changed. Thompson put up as many as 42, as few as 17 points. Gervin posted a high of 40 and a low of 8, which occurred mere hours after Gervin’s son Gee, a future Harlem Globetrotter, was born prematurely on March 28. Gervin took a 26.8-26.6 ppg scoring edge, which was
essentially a 14-point blip over the course of the entire season, into San Antonio’s finale at the New Orleans Jazz.