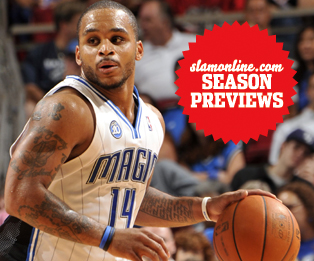 We continue previewing the Southeast Division with the Orlando Magic. You can read past previews here.

Here we are yet again my friends, another year, another season and still no real title contention. I hate to be the bearer of bad news but it’s true. For the last couple years it’s been fun watching the

Despite his height (and my complete lack of faith in him) Jameer Nelson turned into a fine point guard in this League. Hedo Turkoglu is at the peak of his career; Rashard lewis is healthy and playing great ball. New additions like the energetic and crafty Mickael Pietrus, along with veteran point guard Anthony “Beetljuice” Johnson – who at times shows flashes of brilliance – will try and put it all together this season.

Building off of last year’s momentum, the Magic will pick up right where they the left off. A few offseason trades and a year of gelling together is great for the organization and amazing for keeping hope alive in the fan’s hearts. Last season the Magic fell to mighty Motor City Pistons in the Second Round of the playoffs. This year they will one-up themselves and make it to the Eastern Conference Finals against KG and Boston for a nice fairytale adidas brotherhood showdown.

How’d I come to that wild and crazy prediction?

Well, it’s simple to me. Dwight comes in year in and year out with new tricks up his sleeve — whether it’s better shot selection, better footwork or more willingness to snatch down every board. What’s this off season’s lesson? Lets see, well he got a gold medal in the Olympics, he played under Coach K with the likes of Kobe, CP3 and Bron – three of the League’s best young leaders. Is there any chance he picked any leadership skills?

Did it teach him how to pick up a team and carry it on his giant 7-foot frame? I think so, or at least hope so. Leadership is one of the biggest holes in his game right now. Now, I don’t mean leading by example, he has that down pat, he plays hard night in and night out. But he needs the ability to jump out of his nice guy suit and get in his teammates a$$ from time to time, just to keep ‘em honest.

I have faith that this is something that will be closed with age and maturity I think it’s just one of the things playing college ball teaches if it’s not already in you like LBJ has it in him. My point in saying all that is this team has a great deal of potential, allot of role playing stars who can score the ball (Hedo, Rashard and Jameer) they’re equipped with shooters such as J.J. Redick and Brian Cook. Now Mickael Pietrus provides a certain defensive toughness for the Magic as well. It will be a fun and exciting year, but we all have to wait and see if Dwight is ready to superman this b*tch!

Yooooooooouu, will just have to wait and see. I say he is.