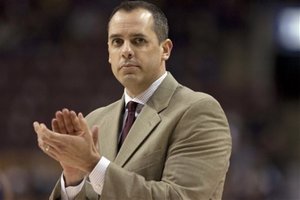 Fearing that they would be giving opponents too much motivation, most NBA coaches avoid any talk about rivalries or dislike for other teams. Frank Vogel, the Indiana Pacers’ young coach, is not like most others.

Last week, the Pacers walked out of Chicago with a tough win over the Bulls, and their post-victory celebration got under Derrick Rose’s skin. He vowed revenge next time the two teams meet.

“I don’t know if we really celebrated any more than a lot of teams celebrated when they get a road win,” Vogel said. “I know they’ve got a couple guys on their team who celebrate on every play. I just think it’s the thrill of victory. If they want to add some spice to the rivalry we welcome that. Rivalries are fun. Winning is fun. It’s all good.”

In their first meeting since a physical first-round playoff series won by the Bulls last season, the Pacers ended Chicago’s 12-game regular season home winning streak with a 95-90 victory on Jan. 25. The Pacers’ celebration left an impression on Rose. “I’ll never forget how they celebrated just from winning this game,” Rose told reporters after the game. “I can’t wait to play them again.” Bulls swingman Ronnie Brewer said that the Bulls could hear the Pacers’ celebration in the locker room. Vogel defended his Pacers, who aside from handing the Bulls a rare home loss, did it on the second night of a back-to-back after a loss to the Orlando Magic.

The next meeting between these Central Division rivals takes place in Chicago on March 5th. And one can only hope that they’ll get a chance to go at it once again during the postseason.

Two good, young, feisty teams that don’t like each other at all. What more could you ask for?