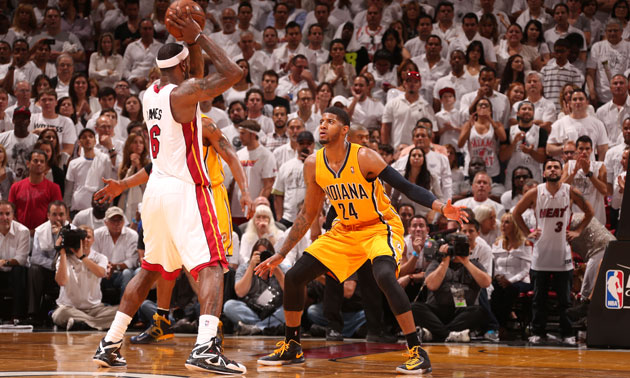 After blessing SLAMonline with the nERD Power Rankings throughout the season, our guys at numberFire are back to help us look at the postseason in an analytics-based way. So what do the algorithmic models say about the Pacers’ odds of beating the Heat? NumberFire’s Chief Editor is here with the answer.—Ed.

Up one, two seconds left in overtime. LeBron takes the inbound. Paul George overpursues, and King James has a clear path to the net. Less than a second left now, the layup is up and… silence. Roy Hibbert got his fingertips on the shot! The Pacers take Game 1 in an absolute stunner in Miami!

Come on, if you’re a Pacers fan, you know that scenario has played out in your head at least 13 times in the past half a day. But as it stands, Frank Vogel is the biggest goat in Indiana since Kelvin Sampson, and the Fighting LeBrons steal Game 1 away from the plucky underdogs.

What you may not know, though, is just how dear that layup was to the Pacers. Going into the series, the Pacers held a 25 percent chance over the top-ranked Heat. While those are significantly lower odds, they weren’t insurmountable.

But now? Let’s just say that the Pacers could have made this one an almost-even series, if not for one late layup mess-up.

After last night’s loss, the Indiana Pacers are in a deep, deep hole. Of course, this is the Land of Hoosiers, so anything can happen. But, I mean…

There is now a worse chance of Indiana taking the series at all than there is of the Heat sweeping each of the next three games. That’s not a good sign. The Pacers may have taken down the Hawks and Knicks, but they never held odds lower than 45 percent at any one time of taking those series.

But now for the part that hurts. What would have happened if the Pacers had actually stolen Game 1? According to the odds, we’d have a whole new series.

That right there would be just about even. By virtue of not stopping the Heat on their final possession, the Indiana Pacers’ win odds in this series dropped by nearly 30 percent. If the Pacers had won, the most likely outcome would be a Heat victory in seven games. Now, though, the Heat hold over a 65 percent chance of winning the series without even needing some Game 7 magic.

What Can Indiana Do?

The Pacers almost did everything right. They forced Miami into a 17.1 percent turnover rate, 3.4 percent over the Heat’s season average. They grabbed an obscene 43.8 percent of available offensive rebounds. They couldn’t outshoot Miami, but their .036 effective field goal percentage (eFG%) differential was at least close. They went to the line more often. They almost had it.

However, there were two main keys that helped Miami stay in the game and ultimately come back in the fourth quarter. If Indiana is going to steal a game, let alone the series, there are two main areas they need to fix.

Maybe it was lost in the last seconds hoopla, but remember Chris Bosh‘s putback And-One that tied the game at 99? That might have been out of the ordinary for Bosh and his two total rebounds, but it certainly wasn’t for the Heat as a whole. Udonis Haslem led the team with four offensive rebounds while LeBron, Wade and Birdman each had three. The Heat as a team finished with a 38.1 percent offensive rebound rate.

That figure isn’t just out of the ordinary; it’s as far of an outlier as you can possibly imagine. During the regular season, the Heat only finished with a 22.2 percent offensive rebound rate, good for 26th in the NBA. It was their primary Four Factors weakness. Indiana, meanwhile, held the league’s sixth-best defensive rebound rate at 74.6 percent during the regular season. Their 61.9 percent rate from Game 1 has to regress to the mean if the Pacers are going to fight back against the Heat.

The Pacers were incredibly efficient at holding down the Heat as an overall squad – Miami finished with a .506 eFG%, a figure they had only finished below in 14 of their 82 regular-season games (including one against Indiana). That was exactly the type of defensive performance they needed to stay in it given their own below-average shooting.

If they are to completely shut down the Heat, however, Miami’s efficiency in the paint needs to be keyed in on. Dwyane Wade didn’t attempt a single three-pointer (in fact, Miami’s 18 three-point attempts was tied for their lowest all Playoffs), but he still finished with 19 points by virtue of a 9-15 shooting day. Birdman, meanwhile, will almost never repeat his 16 points. But the fact that he was ever able to shoot 7-7 and grab 16 points does not bode well for Indiana’s interior defense.

Yes, I know Hibbert and David West were in foul trouble, and yes, I know a lot of those successful field goals were on offensive rebound put-backs. But physicality inside was never a question we’d thought we’d have to focus on for the Indiana Pacers in this series. Even more than LeBron’s layup, though, it may have lowered their win odds by 30 percent heading into Game 2.