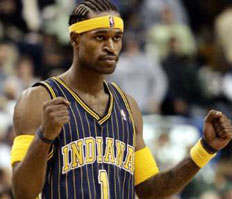 The regular season jumps off tomorrow night, but before that happens, we’ve got to wrap up our Team Previews.

SLAM: I guess we must address the Stephen Jackson situation first and foremost: Will the team let the shooting incident distract them, or will they rally around Jackson and use the criticism as motivation?

MM: I don’t believe the incident involving Jackson and the other players has had any impact on the team either way. Perhaps they’re hardened to this sort of thing now, but I don’t sense that they’ve rallied around him or been distracted by it.

Jackson, according to the people who watch practice every day, has had a very good camp. He seems more focused than usual. I think the incident plays into that, but so does the way he ended last season. Fans were down on him because his on-court demeanor was poor. He came into camp promising a new outlook. Now he’s under the gun more than ever. He hasn’t complained to referees at all so far in the pre-season.

What do the Pacers as an organization need to do in order to become an Eastern Conference powerhouse again?

Keep tweaking their roster. The current group is certainly a playoff team if it stays reasonably healthy, but isn’t likely to become a title contender. O’Neal is an All-Star, and Harrington and Granger have the potential to be. Tinsley could have his best season yet in the new uptempo offense, and the bench is strong. But for now there’s not enough individual greatness to make this team a contender.

Indiana plays in the East’s toughest division. How do they stack up against the Cavs, Bulls and Pistons?

They’re not as good as the Pistons, but can compete with the Bulls and Cavs. Cleveland, to me, isn’t going to improve much. James can’t get much better and they don’t have the money to spend on free agents. Eric Snow is a hole at point guard and the depth is questionable. Chicago has a lot of weapons and good depth, but Wallace is well past his prime and the rest of the key players are still young.

I’d predict the Pacers for third in the division, slightly behind the Bulls and ahead of the Cavs.

Even though they’re deep in Hoosier Country, the Pacers have had to work hard to win back fans following the Artest and Jackson incidents. Is it working?

Not after the incident at Club Rio. The Pacers pulled part of their marketing campaign because it would have been easy to mock at that point. The team has a lot of work to do, more specifically, a lot of winning to do in order to win back the fans.

Alright, enough foreplay, how will the Pacers fare this season?

They should make the playoffs and win 48-50 games with reasonable health. They’re likely to get off to a slow start because they’re still getting accustomed to one another and have a difficult early schedule with a lot of road games.