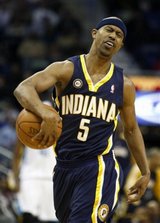 According to the local press, Larry Bird and the rest of the Indiana Pacers’ braintrust appear ready to move some players for the first time in a while. TJ Ford and Mike Dunleavy are no longer in the team’s plans for the future, reports the Indy Star.

Indiana is looking for someone to take the injury-prone guard and forward off their hands:

The Pacers don’t feel comfortable going into next season with their current roster. That’s why team officials want to make a trade for the first time in nearly two years. The two players they’re trying to move are T.J. Ford and Mike Dunleavy, according to sources.

Ford isn’t surprising because the Pacers have been trying to unload him for some time. Dunleavy is the surprising one because coach Jim O’Brien has always held him in high regard due to his ability to grasp the offense. The Pacers have a logjam at the wing spot with the addition of Paul George last month.

The problem the Pacers are running into with Dunleavy is that he’ll make $10.5 million next season and there are concerns about whether he can regain his touch from the 2007-08 season when he averaged 19.1 points and shot nearly 48 percent from the field.

Dunleavy (slated to earn $10.5 million next season) and Ford (on the books for $8.5 mil) are each coming off their worst seasons statistically since they were both rookies.

So, no, it will not be easy for the Pacers’ front-office to move them and get something of value in return.

Teams are reportedly more interested in trading for Troy Murphy, a productive player that Indiana is understandably reluctant to move.