Pau Gasol Is the MVP of the Lakers 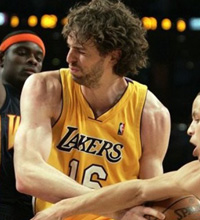 Shoutout to Kenny for saying I didn’t have “the huevos” to write this story, but in actuality it’s something that’s needed to be said for years.

We all witnessed the spark of an interesting debate on Saturday night, as the good folks over at TNT raised some eyebrows in the response of the “fans” saying that Kobe Bryant was the NBA Player of the Decade.

By a resounding margin, Kobe was voted No. 1, capturing 54 percent of the vote. This leads me to believe that only Laker Stans voted in this poll. Charles Barkley, who after hearing that the vote skewed heavily to Kobe, said that “the fans don’t know anything” and said that Shaquille O’Neal should be the Player of the Decade. Then all of the other TNT panelists said the exact same thing.

Pretty resounding, isn’t it? The fans vote Kobe the Player of the Decade, yet Shaq won just as many titles as Kobe, Shaq was the preeminent force on those 2000-03 Lakers teams while Kobe was gradually growing in his role as Robin. Shaq leaves forced beyond his will Los Angeles and the Lakers go into the tank as Kobe can only take those teams to the bottom of the playoff bracket.

Hold up Ed, you’re not saying Pau Gasol is as good as Shaquille O’Neal are you?

However, in the first two seasons Gasol joined the team the Lake Show has been to the Finals both times. We forget that the biggest bonuses that having Shaq first, then Gasol later on the squad was tenfold. Having a well-respected big man down low allows Kobe more room to operate on the perimeter. Having a well-respected big man allows Kobe to rest and lets the offensive facilitate through someone else. Having the big man down low takes some of the defensive pressure off of Kobe, especially if someone gets by him.

Sure, Kobe’s more dynamic. He’s going to shoot the game-winners. He’s the poster child for the League. We all know this. If we were talking about the Most Outstanding Player for the Lakers and the NBA, of course Bryant wins this award.

However, the title is “Most Valuable” and from a value perspective it’s extremely tough to say isn’t more valuable. Plus, who’s to say that Gasol doesn’t make players better? Lamar Odom was almost traded roughly 38 times before Pau got there, however Gasol and Odom (and Bynum to a degree) remind some of the Uncles in our family to a Parish/McHale/Walton ’86 Celtics feel of a frontcourt. Other teams in the NBA have strategically reshaped their teams to beat LA, by adding frontcourt depth in particular.

The Lakers are 57-33 all-time when Bryant has been out of the lineup. Parse that down to 82 games, that’s about 52-30? In the 3 full seasons Kobe played without Gasol the Lakers had 34, 45, and 42 wins. In 2010, the Lakers have continued to show that they can win without Kobe. Could they win a title? I don’t think so, but they’d definitely get out of the first round and I truly believe they make a run to the finals. Kobe is an awesome individual player, and truly one of the greatest players of all-time. Yet, he’s been launched into this stratosphere which is somewhat undeserved and we must endure the fact that, “Kobe lead his team back to glory, he’s a true leader” and “He just wants it more than everyone else.” Really? No, the man wants rings and by GM Mitch Kupchak trading swindling with the Grizzles to get Pau, the power shift began in front of our faces.

Gasol’s filling Shaq’s role. One uses finesse, another uses brute force. However, one is generally pretty reserved (Gasol, although he’s also very swarthy and “unshowered” looking) while Shaq wanted the limelight as much as anyone in NBA history. However, they are both the true catalysts of the Lakers’ team and Phil Jackson knows it. He’d never say it though, he’s got to make sure Kobe and the fans know who the “real” MVP truly is.

Eddie Maisonet is a writer of all sports, who’s also a big-time hoops and Oklahoma City Thunder fan (Sooner State stand up!). Keep up with Eddie on SLAMonline as well as his award-winning blog at Ed The Sports Fan and on Twitter.