Pau Gasol Moved to the Bench Permanently By Mike D’Antoni 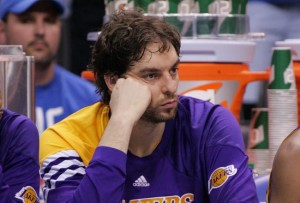 Unable to figure out how to effectively and simultaneously use both Dwight Howard and Pau Gasol in his system, Los Angeles Lakers head coach Mike D’Antoni demoted Gasol to the bench.

The result was the same last night in Chicago, as the Bulls handed the Lakers their third consecutive loss.

When asked about the move prior to the game, Pau Gasol said he disagreed with it, and admitted that his time in Los Angeles may soon be coming to an end. Following the loss, Gasol walked back some of his anger (after posting 15 points and 12 boards), and said the Lakers have much bigger concerns than just his reduced role.

Pau Gasol is being removed as Lakers’ starting power forward in favor of Earl Clark, and not on a temporary basis, D’Antoni said before the 17-23 Lakers played in Chicago on Monday night. “We just have to do that,” D’Antoni said. Said Gasol after he didn’t start and the Lakers dropped to 17-24: “I’m not excited about it. … But right now I’m more worried about us as a team and us struggling, and it’d be selfish of me to talk about something I feel in particular.”

“We’re better when we’re small,” said D’Antoni, whose system is based in having four players on the perimeter and only one center in the post. […] D’Antoni is determined now to stick with his style of small ball, saying: “You can’t keep going back and forth and guessing.” He already spoke to Gasol about the move and said about that conversation: “That’s life. He understands. You have to have an identity,” D’Antoni said. “And you have to create an identity.”

With the February 21 trade deadline looming, the Lakers will have a tough time moving Gasol — he’s the 9th highest paid player in the NBA this season (at $19 million), and the team isn’t interested in taking on any more long-term salaries.

The nightmare in Lakerland continues.