Pau and Marc Gasol are forces to be reckoned with, now more than ever before. 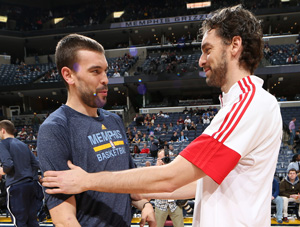 There have been lots of brothers who have played in the NBA, which makes sense. If the guy who pounded you constantly as a kid on the family basement sock-basketball court has the genetics and temperament to play in the bigs, why not you? Just a short list of siblings who have played in the League includes Harvey and Horace Grant, Bernard and Albert King, Jim and John Paxson, Mike and Willie Sojourner, the trio of Jon, Brent and Drew Barry, and even the fabulous Jones quartet: Caldwell, Charles, Major and Wil.

But right now, beside the towering Lopez brothers, Brook and Robin, we’ve got big men Pau and Marc Gasol showing how brothers can dominate on the floor. Seven-foot, 250-pound Pau, 34, who earned two Championship rings with the Lakers, is in his first year with the Bulls and playing as well as he ever has in his 14-year career. Seven-one, 260-pound Marc, 30, is in his seventh season with the Grizzlies and is playing far better than he ever has. A career 12-to-14-point scorer, Marc, now minus baby fat and looking ripped and energetic, is on a 20 ppg clip, and his defense is as good as it was in 2012-13 when he was named NBA Defensive Player of the Year.

Pau is a certain Hall of Famer, and if Marc continues to improve and is lucky enough to win a crown or two, he’ll join his big bro in Springfield, MA. Not bad for a couple guys from Spain whose parents are both doctors.

In a recent overtime win against the Celtics, when Bulls teammate Derrick Rose clanged 13 of 18 shots, Pau took over, as he often has, finishing with 29 points, 16 rebounds and 5 blocks. “Unbelievable,” said Bulls coach Tom Thibodeau. “We see it night after night.” A week earlier, Marc had put up 29-8-4, with 2 blocks, against the Rockets.

“I’m happy to see my brother doing so well,” Pau told me when I asked about the sibling thing. “And it’s very special—to have a little brother in the League. But I don’t think about the brother thing that much. Once our careers are done, then we’ll see where we stand.”

Tall and proud, for sure.