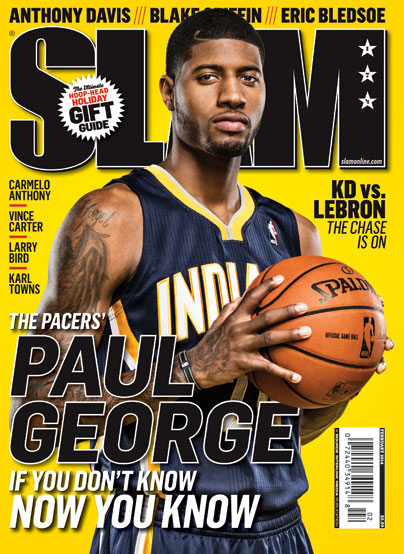 Paulette George knew that her youngest child would be special from the moment she laid eyes on him on May 2, 1990. Actually, that’s not accurate. She merely saw a physical anomaly; it was her mother and grandmother who foretold of future greatness from Paulette’s only son.

“Paul has a little pinhole on the right side of his ear,” Paulette says in a soft, sweet voice over the phone. “When he was born I said, ‘Why is that hole there?’”

Medically speaking, the hole, almost an ear piercing in appearance, was nothing to worry about. Spiritually speaking, according to Paulette’s family, it was actually something to rejoice over.

“My grandmother, she’s passed away some years now, always used to say, ‘That baby’s going to be special,’” says Paulette. “I was like, ‘Really?’ She said, ‘Yeah. When kids have pinholes in their ears that means they’re gonna be special.’”

Whether you love or leave that legend, Paul George, who at 23 is still a baby in NBA years, definitely doesn’t have many holes in his basketball game.

“Paul’s mentality is what makes him so good,” says Pacers rookie Solomon Hill. “His mentality that he wants to be the best two-way player. It’s that he’s not just about scoring; he wants to get stops as well. When you have guy like that, it really shows you the bigger picture. It’s not about trying to put up as many points as you can; it’s about being efficient on the offensive end and stopping your player. That’s something that’s really different about him.”

Another difference, and this might be the most impressive feat, is that the All-Star was able to fly under the radar for most of his life.

The pride of Palmdale, CA, didn’t play big-time AAU ball until the summer after his junior year of high school and didn’t star on his high school team until he was a senior. Due in part to the lack of scouting reports on him, George attended Fresno State, hardly a hub for basketball. While there, he played two solid if not spectacular seasons, and ultimately ended up going 10th in the 2010 NBA Draft. Even then, though, not many knew who George was and even fewer expected this.

(For more on his background and personal story, be sure to read the actual cover story in SLAM 174.)

It’s 2013, and George is now on the cover of SLAM. He’s now a legit MVP candidate. He’s now the face of the first-place team in the east. And he’s still not satisfied.

George isn’t the only story in this issue, obviously. There are thorough features on up-and-comers Anthony Davis and Eric Bledsoe, an awesome report about basketball in Cuba, an old school on Bobby Hurley and plenty of the always-tight high school and college coverage.

You can read all of this in this George-covered issue of SLAM. Speaking of which, you probably won’t see this issue of SLAM in your mailbox or at newsstands for another week or so. We just wanted to let the issue pop before Thanksgiving.

After all, everyone’s been so late on George we figured he was due for some early, extra shine.