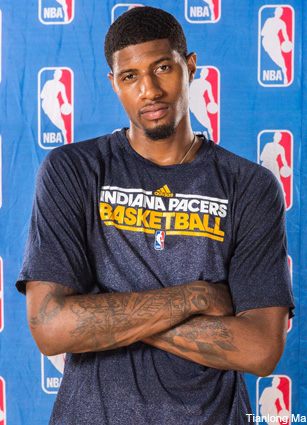 It wasn’t that night in November against the Hornets when he broke Reggie Miller’s franchise record for most three-pointers in a game, going 9-13 from beyond the arc for a career-high 37 points. It wasn’t that game in February versus the Bobcats when he had his first career triple-double. It wasn’t when he heard about his first All-Star selection, when he finished the season with career highs in points, rebounds and assists, or when he was named the NBA’s Most Improved Player. Not his first playoff triple-double on the Hawks, or the dominant series against the Knicks, or the game-tying three in the Conference Finals against the Heat, or his monster dunk on Chris Andersen in Game 2. It wasn’t about his efforts in closely matching MVP LeBron James every step of the way in a classic series.

Nope. When we asked Paul George in Wuhan, China, about his most memorable moment of the amazing, breakout ’12-13 season, he talked about a loss. And to be more precise, the most crushing loss that a player could be handed. It was Game 7 loss in the Eastern Conference Finals, after coming within just one game of the NBA Finals.

“Going through my first Game 7, you know it really brought the spotlight on me,” George said, “And being able to perform in that spotlight—that was a make or break situation—I think that was again another step in the right direction for me.”

But George couldn’t perform in that Game 7 spotlight. He had a game to forget, scoring only 7 points and fouling out early in the fourth quarter. He and his teammates couldn’t find an answer to LeBron and Dwyane Wade, who carried the Heat to a blowout victory and into the Finals. And yet, it wasn’t all his successes over the exceptional past year that he chose to remember, but his failure at the biggest stage yet.

For every rising star in the NBA, there is always the ‘honeymoon’ period, when media and fans give them a benefit of the doubt, when their talents are celebrated and their weaknesses are generally masked or ignored. Think upcoming stars like Kyrie Irving, James Harden or Stephen Curry. Because of their general ‘newness’ into the NBA’s biggest spotlights, many aspects of their game are still a secret to the mainstream. They escape criticism in favor of their potential, and it is only when they hit mainstream popularity, when they begin to find themselves in make-or-break situations at the highest stage, do we hold up a microscope to their shortcomings and mistakes.

Consider the honeymoon over for George. After the end of his third season, one that resulted in a lengthy playoff run, his game is no secret anymore. Sure, Indiana isn’t either one of the NBA’s big national TV markets, or has the worldwide popularity of many of their rivals, but the accelerating talents of George couldn’t be kept hidden any longer. At just a few months past 23, he has already morphed into one of the NBA’s most impressive talents on both ends of the floor. We saw the potential in him, but few predicted he’d get there so soon.

And now, after tasting so much success so quickly, and heartbreak as well at the biggest stage, he plans to come back and do it all over again—only better.

“I love what I do, love getting better, love adding things to my game,” George said. “For the next season, I want work on being a leader, being efficient on the offensive end, and being a dominant scorer in the post. That’s probably what I’m working on most this summer.”

Before he looks forward to the next season, while still basking in the afterglow of the last, George spent a short time as the offseason kicked off in China, aiding the NBA with its NBA Nation events across the country, including towns like Wuhan where SLAM caught up with him. Amidst the basketball carnival resembling an NBA Jam Session and hundreds of fans lining up to catch the very glimpse of him, George spoke about his present trip, and looked ambitiously ahead at a bright future.

“Coming here [to China] is an experience for me too, to see that we have such big fans here in China. I hope I keep coming back here. It’s my first time in Wuhan, but second time in China. Fans here love the game as much as we do.”

Even casual fans know him now, and know all about his team. For the better part of the last decade, no single player from Indiana had brought the franchise to international fame so swiftly. The last time Indiana mattered, they were led by Jermaine O’Neal and Ron Artest. And the last Pacer to gain so much traction was a sharp-shooter by the name of Reggie Miller.

George’s arrival into the team as a rookie back in 2010-11 coincided with the team’s changing fortunes. With every season, they have gone one step further: First Round in 2011, Second Round in 2012, and Conference Finals in 2013. The expectations are now on the team to better themselves once again, and we ask George if his team is up to the challenge.

“Well, I think we answered that by losing to Miami, but at least getting to Game 7 of Conference Finals,” he said, “We’re a young team. It takes understanding to grow together, survive those early scares, and get better. We understand more now what it takes to get there. As a team, we have to strengthen up. All the guys have to get better, all of us have to know our roles. We just have to be a better team. We have played great together all year long already. Like it is with the Spurs, everything has to be in sync.”

Being ‘in sync’ is easier said than done. George’s breakout season was forthcoming, but it was pushed ahead earlier than schedule by Danny Granger’s injury, which forced Lance Stephenson into the starting lineup and George into the role of the primary perimeter scorer for the Pacers. Now, with Granger set to return next season, there will be some questions about how all three will continue to play together in the crowded swingman position.

“We work so well together,” George says, “There are no egos, it’s not about who’s getting shots, who’s getting points. We can all create for ourselves and create for one another. I think [Granger’s return] just opens up everyone’s game. You can’t sag off Danny because he shoots the ball so well. And you can’t pressure up on Lance, because he has the ability to get to the rim. I think all three of us really have a knack for scoring the ball and creating for one another.”

At full strength, George’s teammates will feature two former All-Stars (Roy Hibbert and David West), another former Most Improved Player (Granger) and another athletic young talent in Stephenson. Other teams in the East, like the reloaded Nets, the Knicks, and the healthy Bulls will be in their paths, too, but after getting to the Conference Finals, the Pacers should once more feel like Miami’s toughest challengers in the Eastern Conference. But the honeymoon period for Indiana as a team—just like for George as a player—is over too. Anything less than a return to the Conference Finals will be considered a disappointment.

And it is George who can be the difference between the Pacers being a good team or a great one. His individual improvements have coincided with the team’s rise over the last three years. And they will parallel his rising talents in the future too.

“I’m nowhere close to getting what I want to achieve,” he said, reflecting on his NBA journey so far, “But I think I’m taking the right steps and going in the right direction. I can see myself being an MVP in the League. I think, if I’m not in contention for an MVP award, or leading my team to the Championship, then I think I’d be selling myself short as a player. In the near future, I wanna have the MVP award, be on the Olympic team, be a perennial All-Star, hopefully First-Team All-NBA as well.”

As we hear his plans, they sound at once ambitious and yet completely possible. Ambitious because he’s in a league with the LeBrons, Durants, and Carmelos; a league where there is cut-throat competition facing him every day at the swingman role, including in his own team; and a league where there is even less room for error for the Pacers as a team, as George learned with the lack-luster Game 7 that cost them a Finals berth.

But George lays out his plans with complete assurance, a confidence in his voice that makes the implausible sound achievable. In three years, he has improved dramatically before our very eyes, over-lapping many of his other young contemporaries and gaining the respect of those he idolizes. His quick rise has surprised many in the past—but for a young star who so carefully dissects his past mistakes and meticulously plans out his ambitions ahead—nothing about the future should surprise us anymore.