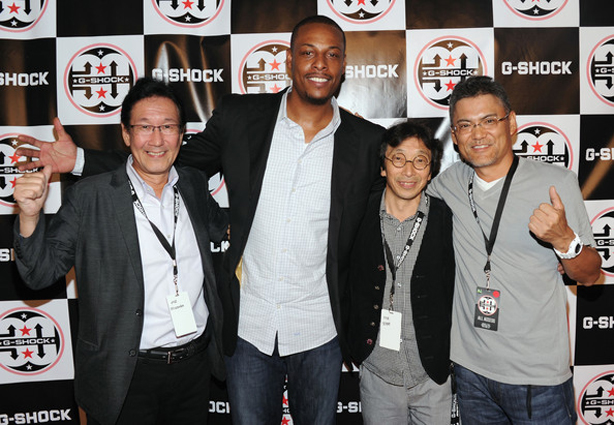 NBA players change teams all the time. It’s an inevitable part of professional sports, and the League’s participants are taught from a young age how to experience the transition, if not through actually experiencing it then by learning the “basketball is a business” mantra that’s always popular amongst NBAers and those familiar with the way the Association operates.

Somehow or another, before this summer, 10-time All-Star Paul Pierce never once switched jerseys during his 15-year career, and perhaps lost in the hoopla of the Brooklyn Nets’ blockbuster deal has been the simple fact that a long-established superstar will be forced to undergo the basic conversion from one NBA franchise to another, having to adapt to new teammates and a new coach and a new organization and a new city for the very first time. (Or maybe it hasn’t been lost whatsoever. Either way.) At the G-Shock “Shock the World 2013” 30th Anniversary event in Manhattan’s Basketball City Wednesday night, minutes before Shady Records artist Yelawolf warmed up the stage with a lengthy set and a couple hours before Eminem ran through a bevy of hits for the hundreds in attendance, Pierce sat on a couch in the VIP section and talked about embracing his life’s next chapter and his hopes for this season’s Nets.

SLAM: How’s your summer been?

PP: Yeah man, I gotta figure out a good tunnel to go in, or a good bridge to take.

SLAM: You know you tweeted the wrong tunnel, right?

PP: I thought it was the Holland?

SLAM: Nah, that was the Lincoln.

PP: [Laughs] I got confused! I thought it was the Holland.

SLAM: Have you been speaking regularly with Jason Kidd?

PP: We haven’t talked in a couple weeks, since the press conference. Before that we talked a lot. But I’ll be here—I’m gonna settle in New York probably the first week of September, just to get adjusted to the city, be around the guys before training camp starts.

SLAM: It’s really amazing that you’re going through the new-team experience for the first time.

PP: Everything’s all new. I’m embracing all this, that’s why I’m here in the summer. This is my third trip to New York this summer, going to events like this. I’m gonna embrace it.

SLAM: How long do you think it’ll take you guys to fully jell?

PP: It’s really hard to put a timetable on it, because you don’t know the chemistry. For instance, me, Kevin and Ray, we got together and jelled instantly. But that doesn’t happen all the time, that was just a special situation. It’s possible it could happen again. You never could really put a time on it—it’s something that just naturally happens.

SLAM: Over the past couple of years, at times we’ve seen Deron Williams look like the best point guard in the NBA, but often he’s struggled to maintain consistency. Do you think you and KG can bring the best out of Deron the way you guys did with Rajon Rondo in Boston?

PP: Oh, no question. He’s our best player. I envision Deron being amongst MVP talks this year. I think that’s what we need. I wanna try to push him to be the best point guard in the NBA. My presence and Kevin’s presence should help him move back to that level.

SLAM: What can you do to you push a guy like that forward?

PP: I just think him being around us, understanding our NBA habits, understanding what it’s like to have Championship habits—once he sees that, he’ll take his game to another level. Our influence in how we prepare for every game, how we go about our business, how we eat, drink, sleep. All of those things, he’s gonna soak them up.

SLAM: That reminds me of Jay Z saying, “My presence is charity.” It sounds strange but it’s true—your guys’ presence alone inspires those around you.

PP: I think people don’t understand the impact of a presence. For me and Kevin, it’s not gonna be about our numbers night in and night out. We’ve had the days where we averaged 25 points a game. It’s gonna be our presence: our ability to draw defenses, our ability to maybe command a double team, our ability to knock down shots. Even if we don’t have the ball, our presence out there alone is intimidating.

SLAM: Have you spoken with Mikhail Prokhorov yet?

PP: Yeah, we got a chance to see him at the press conference. He really seems like a cool guy. He really seems excited about the franchise and really wants to bring a Championship here to Brooklyn, and the team is constructed for that. That’s what you like. You can just tell that this is gonna be an up-and-coming franchise that you’re gonna be talking about in 20 years in the same category as the Bulls and the Lakers and the Celtics and the Knicks. I think they’re gonna be in that category in the next 10-15 years.

SLAM: It’s cool that you’re getting in at the ground floor level, more or less.

PP: That’s what we want to do. We want to create the foundation of greatness. Once you win one Championship, that’s the start of it. That’s what we’re trying to do.

SLAM: Jason Kidd said he’s going to use movies to motivate you guys.

PP: Yeah, a lot of coaches do that.

SLAM: If you were a coach trying to motivate your players, what would you play for them?

PP: You see, I’m old school. I’m like an OG. I’m more of a Rocky fan. Old school. I sometimes listen to “Eye of the Tiger” right before games. Then, maybe Hoosiers. Those are the old sports films that I grew up watching.

SLAM: I always wonder what NBA players are listening to immediately before games.

PP: I like versatility. It depends on my mood. If I want that killer instinct, or I want to ease into the game—it’s just a different type of music based on the situation. If I don’t like a team, it’s all war music.

SLAM: So, if we’re talking Knicks-Nets at Madison Square Garden…

SLAM: It was always so obvious that you loved destroying the Knicks.

PP: Oh yeah. That was my favorite place to play. [Laughs] I definitely enjoyed it. Just thinking about the rivalry now, and being a part of it—you know I had the rivalry with Boston-New York, and now with Brooklyn—there’s nothing like a crosstown rivalry. Now you have Clippers-Lakers, which hasn’t really been a rivalry ever, but now the Clippers are relevant. And now Brooklyn has moved over here and elevated their play to the level where you can say this is a true rivalry.

SLAM: The NBA schedule was just released. Do you have any dates circled?

PP: I haven’t really had a chance to study it, I just skimmed through it yesterday.

SLAM: I imagine the return to Boston will be pretty emotional.

PP: Oh it’s definitely gonna be emotional. You spend almost half of your life in Boston, so a lot of emotions are gonna run deep, because of friends and the things you accomplished there. The fans there, the season tickets owners—I know a lot of them. I’ll see all those people.

SLAM: Some members of the media have been saying they believe Doc Rivers quit on the Celtics. How do you feel about all that?

SLAM: How’d you hook up with G-Shock?

PP: I’ve got a relationship with Casio, with G-Shock. They’ve always been on the cutting edge of technology. I’ve been a G-Shock wearer since I’ve been a kid, since I could afford the G-Shock. A lot of watches today are so expensive, but this is a watch that’s in everybody’s price range. It’s fashionable.

PP: Oh yeah. I’ve never seen him in concert. I’ve been a big fan of his my whole life—he’s one of my favorite artists.