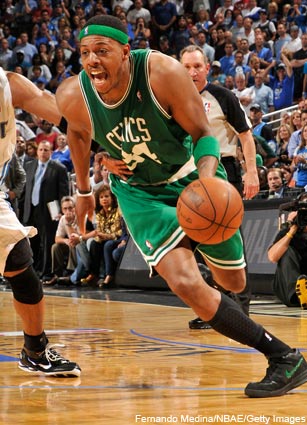 “Anybody got a BROOM?”

That’s the taunting message that materialized on Paul Pierce’s Twitter page not too long after the Boston Celtics dug the Orlando Magic into what could be an insurmountable 2-0 hole. Predictably, the tweet has now vanished, with Pierce’s social media company claiming his page was hacked.

It doesn’t really matter if the account was hacked or not in the grand scheme of things; the damage — the kind that matters; the kind that takes place on the hardwood — has already been done to the Magic’s pride.

They face a much harsher reality than perceived disrespect from their opponent: Orlando’s season is on the brink of termination, with the next two games taking place in Beantown.

Despite a breakout game from Dwight Howard (30 points, 8 boards), the rest of the Magic came up short.

Rashard Lewis disappeared yet again, Vince Carter morphed into Nick Anderson at the free throw line late in the game, and JJ Redick had the ultimate brain freeze, wasting valuable seconds in failing to immediately call a timeout in the waning moments.

It all adds up to a scenario no Orlando Magic player, coach, front-office type, or fan could have possibly imagined. A dream season is on the verge of ending in the most devastating way possible, against a team absolutely no one expected to get this far (save for themselves, perhaps.)

Pierce didn’t even need to use Twitter to crystallize the situation at hand; his postgame comments during a television interview told the entire story, that of a team now only two wins away from a return to the NBA Finals: “We’re coming home to close it out.”