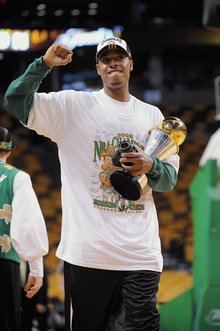 When the news initially broke about Paul Pierce telling a Spanish publication that he’s the best basketball player in the world, I chuckled and proceeded to ignore it, figuring Paul was either still drunk from the post-title celebrations (which would be perfectly understandable), or that something simply got lost in the translation.

Well, it turns out that The Truth didn’t get his words twisted across the pond; he’s dead serious about this. The Boston Herald caught up with the reigning Finals MVP and asked him the question again, and Pierce didn’t waiver.

“That’s what I said. I am a confident player and a lot of people might look at it like ’Oh, another cocky attitude,’ but I don’t look at it that way,” said Pierce.

“I have an opinion, I have a right to have one and that’s the way I feel. I felt I’ve played against the best over the years and felt right now that I’m the best player in the world.”

I should preface this by stating that despite the terrible things he did to my team this past June, Paul Pierce is one of my favorite players in the League. There’s not much that he can’t do on the offensive end, and can be downright unstoppable at times. An absolute joy to watch.

Until he proves that he’s even the best player on his own team, however, I’m simply going to have to ask him to pass along whatever it is that he’s been smoking of late.

(Thanks to Larry Brown for forwarding the link.)