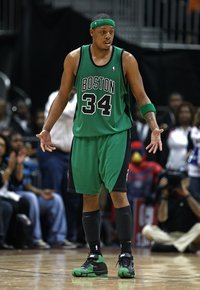 Paul Pierce and DeShawn Stevenson became $25,000 poorer yesterday. Stevenson because, well, he’s Stevenson; and the League says that Paul made a “menacing” gesture towards the Hawks after Al Horford taunted him towards the end of Game 3.

The incident occurred during a timeout with 22.2 seconds left in the fourth quarter as Pierce walked near the Atlanta bench. He made the hand signal before being pulled away by teammate Brian Scalabrine.

There was speculation Pierce was making a “blood” gang sign; he did not comment before last night’s Game 4.

To be honest, I didn’t even know that the Bloods had a gang sign. And since I have no idea what to make of the video evidence, I’m simply going to assume that Pierce threw on a red bandana shortly thereafter.

(DeShawn’s latest attempt to become the most loathsome player in the League can be seen in all of its glory here. Make sure to keep an eye on the score as Stevenson throws away $25K.)

Important Note: There’s talk now that KG shoved referee Ed Rush last night during the brouhaha with Zaza Pachulia (who could end becoming the poor man’s Robert Horry this season should Garnett face some kind of suspension). Things, as they say, could get veeerrry interesting.