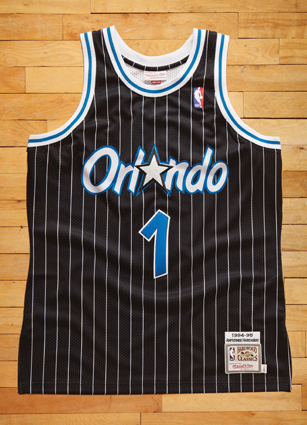 Not many players ever experience as meteoric a rise to the top of the League as Penny Hardaway did during the 1990s. After being selected third overall out of Memphis in 1993, in just his second year in the Association, Penny led the Orlando Magic to 57 wins and the NBA Finals, started in the All-Star Game and was named First-Team All-NBA. More than that, though, the 6-7 guard’s made-for-TV style of play, when matched with the Magic’s then-exciting aura, made Penny a national star and had kids around the US wearing No. 1 and trying to emulate his game.

SLAM recently caught up with Penny to reminisce about good times, the love that Orlando has always shown him, his No. 1 influence and more.

SLAM: When you first got to Orlando, it was still such a young franchise. What were some of your first impressions about the franchise and about the city?

Penny Hardaway: Everything was young. We were young. The city hadn’t had the team that long, and then I felt like everything that we did, we were going to  be setting the bar. No one had done anything before us, so when it came  to things like wins, the Playoffs or individual accomplishments, it was  all new.

PH: I picked No. 1 for a couple of reasons. First of all, Nick already had No. 25, which was to honor a good friend of his, Ben Wilson. We all saw the ESPN “30 for 30” on Ben Wilson, Benji, and he meant a lot to Nick. I tried to do it for marketing as well though, with my nickname being Penny. Wearing No. 1, I thought it all would blend in great.

SLAM: Mitchell & Ness just brought back your black pinstripe Magic jersey. What do you specifically remember about that jersey and the style of it?

PH: I loved that jersey. I loved the pinstripes, and I had never worn pinstripes before. When I saw those uniforms, I loved them right away. Getting to see them again now, it just brings back great memories.

SLAM: It was cool, too, because you even incorporated the pinstriping from the jersey into the tongue of some of your shoes and played off of that.

PH: It felt great. It allowed me to re-live the great moments that I had in Orlando, too. We had a great team, I did great individually, and it was such a beautiful town, so I had the best of all worlds.

SLAM: I remember you rocking throwback jerseys quite a bit at the beginning of the 2000s. What were some of your favorites?

SLAM: What was it like being back in Orlando this past February for All-Star Weekend and having so many people coming up to you saying they were huge fans?

PH: That was a lot of fun, man. It was bittersweet, because going back for the first time in a long time, and being involved in any kind of basketball on the NBA level, the memories just flow. Even though they’re playing in a new arena, it’s still the same fans and they were showing a lot of love. If it would’ve been at the O-Rena, it really would’ve brought back a lot of memories. But to be out of the game for six years and still be relevant and have fans, it’s just amazing.

SLAM: Do you remember a certain game when the crowd was so overwhelming at that old arena?

PH: Any time we played the Knicks or the Pacers. The biggest game I remember though, outside of the Eastern Conference Finals against Indiana, was Shaq’s first game back in Orlando. That was just crazy.