Phil Jackson Contacted by the Cleveland Cavaliers for Coaching Job 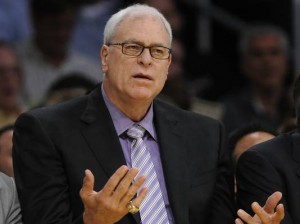 For what it’s worth, Mike Brown remains the front-runner to take over the bench in Cleveland. The Cavaliers reportedly met with Brown about the gig over the weekend.

A much bigger fish is out there for the Cavs — owner Dan Gilbert is said to be interested in bringing Phil Jackson on board.

According to ESPN, the Cavaliers have reached out to the Zen Master to gauge his interest:

As they did eight years ago when he was in retirement, the Cleveland Cavaliers have reached out to Phil Jackson about their head coach opening, sources said. […] Jackson interviewed with Cavs owner Dan Gilbert in 2005, when Gilbert was looking for a coach.

That year, Gilbert ended up hiring Mike Brown. Brown and the Cavs have mutual interest in a reunion. Gilbert and Brown met over dinner Sunday night, a league source confirmed.

Needless to say, it would be the shocker of all shockers if the Cleveland Cavaliers somehow landed Phil Jackson.

It has been reported that Jackson wants to get back into the NBA, but all indications are that he’s looking for a powerful front-office position. Of course, that won’t stop teams from reaching out to him for their coaching vacancies — potential suitors being the Brooklyn Nets and Seattle, should the Kings relocate.