Phil Jackson Doesn’t Like How the Lakers Handled Negotiations 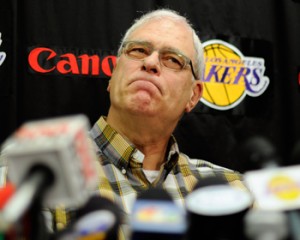 Now that the shock of Mike D’Antoni’s hiring has begun to wear off, Los Angeles Lakers players appear ready to move on. Many of them voiced support and excitement for the decision, and settled back into their regular routines (for Kobe Bryant, this apparently means giving injured teammates a ride on his chopper.)

For Phil Jackson, though, things are not that simple. He (and those in his camp) feels that he got a raw deal from his former employer, and opened up about his gripe to the media.

Jackson said he vacillated over the question all weekend after meeting Saturday with team vice president Jim Buss and General Manager Mitch Kupchak, who went to his home. He hadn’t solicited the visit, but he welcomed them. He was interested in talking about a third run with a team he’d coached from 1999 to 2004 and again from 2005 to 2011. The meeting lasted about 1 1/2 hours. Jackson told them he thought he could do the job. The chat concluded with a handshake and Jackson had the impression he had until Monday to come back to them with his decision. He never got the chance.

The Lakers woke up Jackson with a phone call near midnight Sunday to tell him that Mike D’Antoni would be their coach. “I wish it would have been a little bit cleaner,” Jackson said. “It would have been much more circumspect and respectful of everybody that’s involved. It seemed slimy to be awoken with this kind of news. It’s just weird.”

Jackson goes on to deny media reports that he wanted the moon from the Lakers as part of his negotiations. When he was told by the Laker front-office that they thought Mike D’Antoni was the better fit, Jackson responded in classic fashion: “I don’t. But OK.”

For what it’s worth, Phil Jackson says he doesn’t plan to coach any other NBA team. The Lakers were his only option.