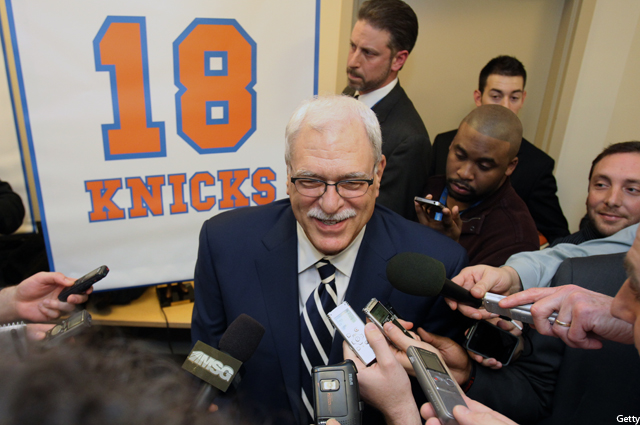 Count me among the people who think that the man with 13 rings, Phil Jackson, will be a rousing success as the new president/CEO/Grand Poobah of the New York Knicks. Count me among the folks who think that despite salary-cap handicaps, 15 years of failure and an owner in James Dolan who has treated the franchise like a baby treats a diaper, the former Knick reserve will turn it around. Phil Jackson can reach into Madison Square Garden’s bottomless pockets, keep Carmelo Anthony and build a team around him that can contend in the lackluster Eastern Conference. Count me among the people who think that Phil Jackson can come home again precisely because home isn’t home anymore. This will work precisely because Phil Jackson is not the same person he was 40 years ago and New York is not the same city it was 40 years ago.

In that glorious blink from 1968-1974, the Knicks were the team that shared the ball like nothing the NBA had ever seen. A roster loaded with future Hall of Famers like Walt “Clyde” Frazier, Willis Reed, Dave DeBusschere, Bill Bradley and Earl “The Pearl” Monroe reflected a communitarian ethos in full step with the times.

The team reflected a city where a hard-working family could actually afford to live as well as a city that gave a damn about its poorest residents. The city was also the setting of Rick Telander’s Heaven in a Playground, the great incubator for basketball talent on the planet, not to mention a place where you could see the Knicks for the cost of a sandwich and a cup of coffee. A great admirer of both that spirit and the collective energy of that team was a hard-working hippie coming off the bench named Phil Jackson.

Phil Jackson told a story in his introductory press conference about getting picked up from the airport by Red Holtzman more than four decades ago and someone throwing a rock that broke the windshield of their car as they drove into town. Holtzman said to him with a shrug, “That’s just New York.” If someone threw a rock at a car today, Navy SEALS would rappel down from the rooftops and put them on a first-class ticket to Guantánamo Bay. No, I’m not mourning for a time of high crime, but I do miss a period when people could actually breathe in the city and not see police officers with flak jackets and M-16s in Times Square.

Today, New York is a 21st century metropolis that is effectively under lock and key. It is a city of extremes, where profound wealth continues to push impoverished residents to the margins and beyond. It is a city where Manhattan has effectively become an offshore boutique and Brooklyn, that place where strivers once yearned to flee, is now where a family cannot afford to move. After a decade of Mayor Michael Bloomberg, this is a city by and for plutocrats.

This certainly reflects itself at Madison Square Garden, where those without hedge funds or three-picture movie deals need not apply for a good seat. Seeing the Knicks has become the most expensive show in town. It is the most valuable franchise in the NBA even though the product has been hollow for years. This “new” New York also reflects itself and is seen in a team built around the hard-dribbling, isolation shooting of Carmelo Anthony. This isn’t a team that is as strong as the sum of its parts but an awful collection of contracts that can only go as far as Carmelo drags them on a given night.

As for Phil Jackson, the man walking into this situation is not the happy-go-lucky freewheeling hippie of 40 years ago. He is a 69-year-old Malibu-living multimillionaire. He is the guy who criticized the Phoenix Suns for supporting immigrant rights, saying, “I don’t think teams should get involved in the political stuff.”

New York is now his kind of town. He will fit in just fine.