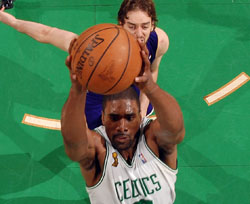 Mutoni is on a plane heading out to L.A. right now, just like his beloved basketball team and the other team that’s not so beloved to him. He doesn’t have a “ticket” or “credential” to get into the games out there, but we’ll see what he can come up with. I gave him what I thought was very sound professional advice – make sure to cover your face during the victory riot so the police helicopters can’t take your photo. Seems that may have been a little presumptuous.

Even if the Celtics go on to do their usual road game flop, the one thing that is guaranteed in this series is that the Los Angeles Lakers can not win the championship on their home floor. Another thing that should go into the guarantee category is that Leon Powe, a back-up player who was featured in a feel good halftime piece during the game, will not shoot more free throws than the entire Lakers team. What did Phil Jackson have to say about that?

“I’m more struck at the fact that Leon Powe gets more foul shots than our whole team does in 14 minutes of play. That’s ridiculous. You can’t play from a deficit like that that we had in that half, 19 to 2 in the first half in situations like that. I’ve never seen a game like that in all these years I’ve coached in The Finals. Unbelievable.”

Striking indeed. Are you ready for the Ronny Turiaf foul shooting exhibition in game 3?