Phil Jackson on the Hypocrisy of Casino Ads in NBA Arenas 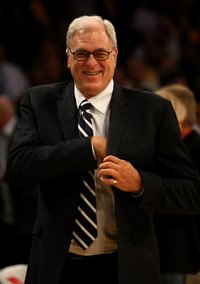 Prior to last night’s big Lakers/Hornets showdown, most of the focus was on the two teams’ respective MVP candidates; how the Hornets would defend the juggernaut Lakers; and which of these two Western Conference giants would send the first message of the season.

Meanwhile, Phil Jackson had other things on his mind.

The Zen Master was busy railing against what he perceives as hypocrisy from the NBA; Jackson can’t understand how the League can take such a strong stand against gambling (see: Donaghy, Tim), and yet still allow the Hornets to promote a casino in their gym.

“We talked about this last year, ” Jackson said. “We thought it wasn’t a good message at all. One side of it says don’t gamble, and the other side you are advertising for it.”

“This is a franchise that is led by a good Christian leader. He has prayer (sessions) before the games. I’m sure he knows what he’s doing.”

That last remark, drenched in typical Jackson sarcasm, may land Phil in some hot water with the League.

According to the linked article, the casino being advertised in the Hornets’ arena does not have any sports betting. Man, I hope no one tells Phil about the Maloof brothers and their sweet little deal.