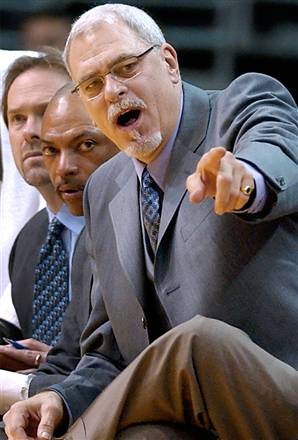 Over the years, a cast of characters—everyone from Bird, Jordan, Reggie, Auerbach, and Payton, just to name a few—has earned notoriety for their words as much as for their on-court achievements. In my book, however, no one has ever been better at verbal warfare (and mind games) than Phil Jackson.

If he’s not mocking the cowbell-carrying fans of Sacramento, he’s calling Pat Riley’s Knicks a bunch of thugs; if he’s not taking a thinly veiled shot at Mark Cuban, he’s performing character assassination on people who play for him. No one is safe from his acid tongue and razor-sharp wit.

After last night’s Bulls-Lakers tilt, Jackson was once again up to his old tricks. When discussing the opponent–a team he coached to six titles in the 90s, he offered up this gem: “Most people around the league would say there isn’t another team that plays with the same intensity. You know they’re driven. They’ll push you to the extreme and they’ll wear you out because they work so hard. They’re a hard-achieving team, and sometimes there’s more froth than substance — sort of like a latte. There’s not much there. I didn’t mean that to be an insult, but they have trouble scoring.”

Let’s break down this delightful little puppy, shall we?

1) He begins by talking up the intensity Chicago brings to each game. On the surface, it’s a seemingly innocuous statement, something that has been said about the Bulls by just about every basketball analyst working today.

2) Jackson then takes it a step further by stating that the Bulls have the ability to push their opponents to the limit. Again, nothing out of the ordinary here.

3) But then when you think he’s gonna give the hard-working Bulls one last gracious compliment after defeating them, he drives a verbal stake through their collective heart by calling them, of all things, a latte. Ouch. Totally out of left field, hilarious, and absurdly ingenious.

The best part is when he goes, “I didn’t mean that to be an insult.”

Sure you don’t, Phil. You wouldn’t dream of doing such a thing.