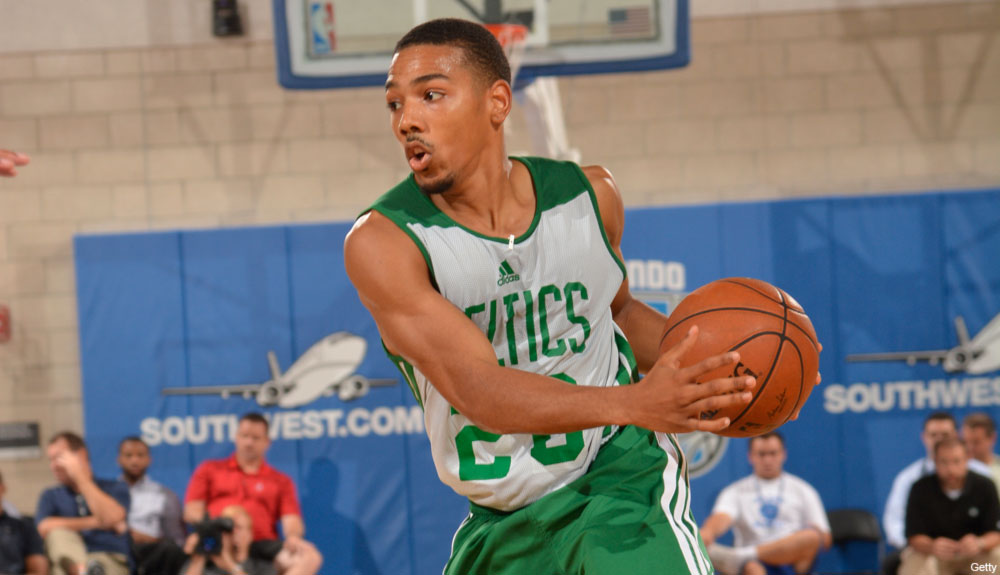 When the Celtics drafted Marcus Smart No. 6 overall in this year’s NBA Draft, many Boston fans immediately assumed the move made Rajon Rondo expendable. That thinking makes sense. Danny Ainge has long been reportedly shopping his franchise point guard around the League. And soon enough, rumors began to swirl that the Kings were positioning themselves to make a run at acquiring both Rondo and Josh Smith to reunite the former Oak Hill buddies in Sacramento.

Waiting patiently in the background of the Celtics’ future plans at the point is second-year guard Phil Pressey.

It wasn’t long ago Pressey delivered an awful performance during the Nets’ second-round pick combine at their practice facility in East Rutherford, NJ, last May. He was turning the ball over on lazy one-handed passes. His compact 5-11 frame seemed like a hindrance his quickness couldn’t overcome.

Then, a strong showing with the Celtics in the 2013 Orlando Pro Summer League ultimately delivered him a roster spot. Boston wasn’t trying to win a ton of games in 2013-14 and knew Pressey was a high-character guy who wouldn’t disrupt the locker room and would simply go to work each day thankful for his opportunity.

Of course, those numbers don’t scream “franchise-changing player.” They don’t even confidently shout “solid career back-up point guard.” Still, Pressey has found a niche in Boston’s program as a consummate professional despite only being 23 years old.  A year ago, he was vying for his big break, now he’s back in Orlando as the elder statesman on the Cs’ summer league squad providing guidance to younger players like Smart.

“Younger guys really don’t understand, I’m still learning myself, but guys coming into the NBA don’t understand how fast games can turn around because the shot clock is only 24 seconds and the game can turn real quickly,” Pressey says after the Celtics’ 18-point first-quarter lead evaporated into a 96-77 loss at the hands of Indiana on Monday.

Pressey’s right. He’s still learning. A year in the NBA is definitely something to hang his hat on. Although he’s the son of an NBA veteran and longtime Milwaukee Buck, Paul Pressey, his staying power in the League is far less certain.

As part of that learning curve, the point guard showed off a silky new floater twice against the Pacers. He’s looked more confident pulling up from mid-range and has morphed into a noticeable vocal leader on the floor. Pressey says he recognizes an increased scoring punch will open up the floor for what he really wants to do: Feed his teammates.

“You want five threats on the court at all time,” Celtics assistant coach Jay Larranaga, doubling as team’s OPSL head coach, says. “Phil is a superb passer, he’s great at initiating our defense and I have a lot of confidence he’ll continue to grow as an offensive player in looking for his own shot.

“But, he’s a very unselfish player. It’s hard for guys that have been passers their whole life to now all of a sudden, after getting into the lane, think ‘shot.’”

Confidence has never been an issue for Pressey. Even though he’s consistently the shortest player on the floor, he’s carried himself with the right kind of swagger ever since he was a pre-teen.

“I just feel like whenever I step on the court, since I was little, I was the best player on the court,” Pressey says. “I never really took a back seat to anybody so I’m just going out there to prove myself. Ever since I was younger I’ve been confident and that’s not gonna change any time soon. You have to be confident because if you don’t have confidence in yourself, who’s going to be confident in you?”

The coaching staff has shown confidence in Pressey to serve as a dynamic offensive catalyst in Orlando. He’s started the Celtics’ first two games in the backcourt alongside Smart, both dominating the ball and looking to score from the wing.

That backcourt combo has been lethal in transition. With that NBA year under his belt, Pressey is thinking one, or even two, steps ahead of the defense and even some of his teammates. Pressey’s made patient, smart reads off the pick and roll, often surprising his diving big man that the ball was delivered right to his hands even though the former Mizzou Tiger had to weave the rock through several giants clogging up the paint.

“I was talking to my dad about this the other day: Playing in the regular season, guys are bigger, guys are faster and here I’m getting to spots a lot easier and quicker and I’m like, Wow,” Pressey says. “This is a lot of guys’ first times in the Summer League and they’re really taking a while to figure themselves out while I’m ready to be aggressive.”

He’s truly acquired the understanding of the organization’s aura and professionalism. Boston’s front office raves about Pressey. Maybe it’s because of his awesome court vision. It might, as Larranaga alluded to, be how Pressey is so damn irritating while defending bigger opposing guards.

Regardless the reason, Pressey has separated himself from the many other Summer Leaguers for one reason: He just has the look of an NBA player. After all, Summer League’s unofficial slogan is, “Great move, terrible finish.”

While you have to hold your breath watching most of these guys, assuming a horrendous turnover or an ugly botched layup is about to ensue, each Pressey dribble clearly has a purpose. He’s playing the game to win. He’s not trying to look the part of an NBA player because he knows he already is one.

So, while Boston has an All-Star in Rondo and has clearly invested a lot of its future into Marcus Smart, don’t forget about Phil Pressey. He might not have a guaranteed contract, but he’s solidified his invaluable role in the Celtics’ program.

“Nothing’s promised, you have to just keep working and try to improve every day. Everybody is trying to find themselves and trying to earn a spot,” Pressey says. “Every single day I’m grinding.”