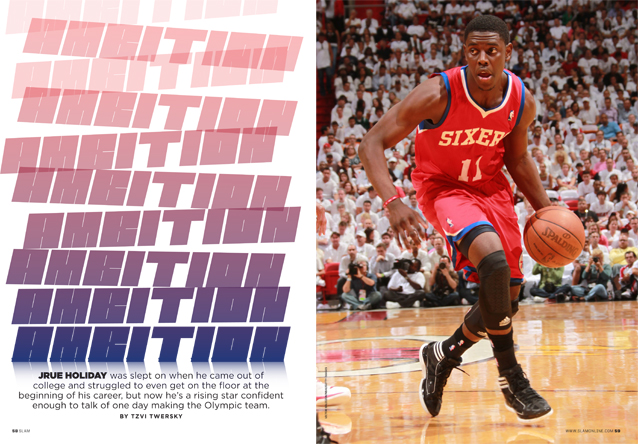 Ask Jrue Holiday to describe himself and the often well-spoken, always honest 21-year-old struggles to come up with more than a meek and mumbled response. “I’m hella chill,” he begins. “I’m laid back. I’m religious. And other than on the basketball court, you’re not gonna get anything too serious out of me.”

Let him continue uninterrupted on the matter for a few more minutes, though, and the point guard somehow crosses the conversation up, diverting the discussion into a different direction altogether.

“My brother, Justin, he’s my best friend,” says Holiday of his sibling, a recent University of Washington graduate and basketball team co-captain, born 13 months before him. “Honestly, I think my older brother is better than me. He’s more athletic; his jumper’s better than mine; he locks down on defense. I just think I got a better opportunity than he did.”

While his initial offerings do in fact describe his basic personality, Holiday’s flipping of the script means more than the sum of his words. A family and team-first kind of guy, Holiday would much rather set up one of his people—in this case his brother—for a good look than he would himself. That rare and innate quality serves the precocious native of California well, both on and off the court.

Over the course of a lengthy phone conversation with SLAM, Holiday, who hopes to represent the Philadelphia 76ers in an All-Star game someday soon, opened up about his past, present and future.

SLAM: You spent some time overseas, this summer, right? First for the Women’s World Cup and then for adidas?

Jrue Holiday: First it was with adidas; I went with Dwight [Howard].

SLAM: What was that like? Did you do it last summer also?

JH: Nah, this was my first time. It was a good experience. I had never been over there, so just really seeing what Dwight does and how the people respond to him, it was cool.

SLAM: Did people over there recognize you?

JH: Not really. Dwight’s huge, though. I mean, obviously, he’s a freaking rock star, but it was cool, seeing Dwight as an entertainer, and honestly just seeing how big basketball is over there.

JH: The World Cup was crazy. I wasn’t really a big soccer fan before; I was just going to games because my girlfriend played. It was just kind of like whatever. But to experience something like that, where it was kind of like one world against another world, there was so much pride out there. And the way that the girls played was crazy. There were a couple of games that came down to penalty kicks, and me and my brother and my cousin were just trippin’ out. To experience that in person? It was nuts. It was nuts.

SLAM: Does watching games at the highest level, make you aspire—

SLAM: Yeah, like, does it make you think, I want to play on the highest level?

JH: Yeah, definitely. Again, just coming into the League, or even in high school, you want to win State, you want to be the best. And in college, you want to win the National Championship. So I’m driven to do that and I’ve always wanted to play in the Olympics, but watching them play really gave me that extra push that I need. Now I’ve got to make it, I’ve got to experience it. Because I’ve experienced from a fans point of view, but not actually, like, playing in the game.

SLAM: Talking about the Sixers….everything seemed better—on a team and personal level—this past season when compared with your rookie year. How do you think you played? Were you happy with your progress?

SLAM: What do you think the biggest difference between your rookie year and second year was?

JH: I think a lot of it was because our team was a lot happier; we had something to look forward to. Again, we had the worst year possible the year before. And even when I really started to play, we were already second to last in the League. I think my rookie year, the way we bonded together, I thought we should’ve done what we did last year. Again, the way we clicked together off the court, you saw how it related on the court. Doug [Collins] really trusts in his guys, and that showed. Like, he trusted me and he told me that all the time.

SLAM: Yeah, early in his tenure he declared that you were a top point guard in this League. What did that mean to you?

JH: It was my second year, and him coming out the gates saying that meant a lot. That meant too much. In high school or even college, you’re already That guy. The coaches didn’t have to pump you up and it’s not like you need self-motivation. But in the NBA, for a coach to say a 19- or 20-year-old is going to be one of the top point guards in the League? It meant a lot to me.

SLAM: Your first year was tough, and before that your year at UCLA was frustrating. Did you ever think, What the hell, basketball used to be fun?

JH: Yeah. There were a couple of years where the things that used to make me the happiest were basically killing me. I remember thinking, It’s not supposed to be like this. Then you get to the NBA, and it’s your livelihood. You don’t do anything else. You don’t have to go to school. You don’t have to meet people, unless it’s for business ventures. My rookie year it was totally basketball, and that wasn’t making me happy. I’d go to my mom and she’d send me Bible verses, she’d talk inspiration. I talked to my older brother, because he struggled in college his first couple of years. My family and my teammates really kept me strong.

SLAM: At what point did it turn around for you?

JH: There was a point my rookie year where everyone was like, ‘We’re not going to make the Playoffs, so let’s go out and have fun.’ And I think towards the end of the year, that’s when I really started getting a lot more comfortable. Even at the start of preseason the next year, I was just amped, I was juiced, I was hyped, I was ready to go. I didn’t even know if I was going to start, but everything kind of fell into place. I was inspired again.

SLAM: Did you ever doubt yourself along the way?

JH: Nah, I never doubted myself. I’ve always just had confidence in what I can do. God has blessed me with this talent, and I feel like I’m one of the hardest workers. At this level you can tell the difference between some guys and the top guys is how hard they work. Some guys have the most talent in the world but they don’t work as hard, so they don’t get better and the point is getting better. It’s progressing. It’s never staying at the same level.

SLAM: You think that’s what gives you an edge on the court?

JH: I think, one, I just work hard all the time, on defense and offense. I try not to take one possession off, not once a game, not once in 82 games. Every time I’m on that court, I just go hard. I think as a point guard, I’m starting to become more keen, starting to become smarter. Chauncey Billups I feel is the hardest guard I’ve played against, because he outsmarted me. And even though he’s been in the game for a while, he might not be faster and I can jump higher, but he’s smarter.

SLAM: You guy made the Playoffs last year after a rocky start. What was that like for you?

JH: The Playoffs were nuts. It was my best experience.

JH: Yeah! Especially playing against Miami. We were definitely the underdogs; they thought we were gonna get swept. We were in there every game, like, one possession could have changed the whole dynamic of the series.

SLAM: Assuming that there is a season, what do you have set in sight for the team and you personally?

JH: For one, to start off where we left off. To start off quick. Last year we started off slow, so I just want to start off quick. We have all the confidence in the world, I feel. We had an awesome year. So just doing that, progressing throughout the year and growing. Last year was just growth. For me, it’s to be in a top spot, to bring something to the game that I haven’t before. I want to bring a different dynamic. I’m gonna do anything I can do to help our team win.

SLAM: That means you may have to make the All-Star team.

JH: Yeah, that could definitely happen.

SLAM: You think about that at all?

JH: Definitely. I think that should be a personal goal for any and every NBA player—to be an All-Star and win a title. That’s what you play for.

SLAM: So next year, you wanna go deeper in the Playoffs and have a huge role in making that happen.

JH: I definitely do. I want to go further in the Playoffs because the Playoffs are crackin’. It’s so much different from the regular season. And if I can make the All-Star game this year, that’d be cool. I wish I would’ve made it last year, especially with it being in L.A., but being an All-Star would be a dream come true.

SLAM: What are your workouts like this summer—what’ve you been working on specifically?

JH: Really just getting stronger. You see how strong and athletic guys like Derrick Rose and Russ are, so I really just want to be stronger. Also, I’m working on getting more range on my jumper. Just trying new things, new moves. I heard that every year Kobe comes back with something new; I’m working on that. Again, it’s all about progression, not staying the same. I’m working defensively, too. Obviously I’m gonna play defense, but I’m working on being more consistent offensively.

SLAM: Is that new move picked out yet?