The Outlet: The Philadelphia 76ers and Their “Process Trusting” Cult of Fans

For Philadelphia 76ers fans, The Process has become much more than a rallying cry. It’s a way of life. 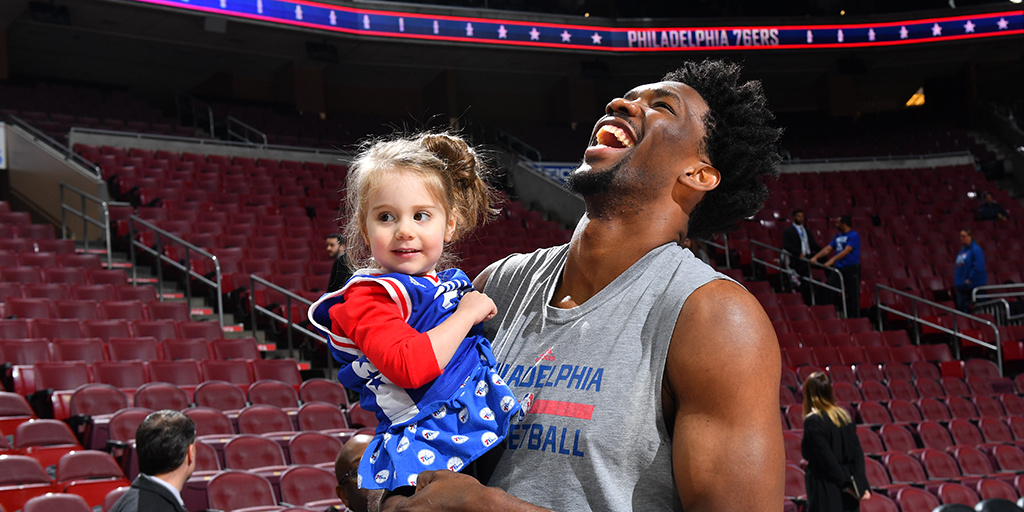 I never understood the appeal of cults (so many rules, such strict dress codes, too much poison) until I met “Process Trusting” 76ers fans.

Now, hand me the uniform, pour me a glass of the punch. I’m all in.

“We had the bus trip this year to DC. The Wizards, the organization itself, were very frightened of us. I had to go on two or three calls with marketing executives to tell them we’re the most harmless group in the history of sports fans,” says cult member Spike Eskin.

Eskin is the crown prince of Process Trusters, and he’s got plenty of stories about accidentally bringing too many people who are obsessed with future Sixers pick swaps in the NBA draft to locations where most people would think “pick swaps” are a weird sex thing. The DC trip was one of them.

“We are getting blown out. This one guy looks at us. He’s making fun of us. We start chanting: ‘First round knockout!’ about the Wizards. He just walked away,” says Eskin. “He could’ve kicked the individual ass of any one of us. But there were all of us. It’s a metaphor for the last four years.”

Television writer Michael Levin and Eskin, who’s a programming director at Philadelphia radio station SportsRadio 94WIP, host a podcast called The Rights to Ricky Sanchez, which made a full, formative identity out of people obsessed with watching the 76ers bottom out and methodically suck and/or build to greatness. Before Joel Embiid gleefully pilfered it as his own nickname, they called it The Process, an homage to former GM Sam Hinkie, who implored old timey newspaper columnists to just wait a damn minute, or year, or decade, while things play out.

Now, at this very second, while I’m on the phone with Eskin, things are playing out. The Sixers have traded for Markelle Fultz and #RTArmageddon, a hashtag created simply to publicly shame anyone who at any point doubted The Process in any capacity, is the No. 4 trending topic on Twitter in the United States.

“I told my boss, ‘You know Retweet Armageddon is going on right now,’” says Eskin. “He didn’t really care. I have an actual job.”

Eskin is underplaying the whole thing. He and Levin filled Philly’s Xfinity Live! space in May for the draft lottery. Not the draft. The lottery. People showed up to watch the NBA’s Deputy Commissioner pull team names out of an envelope. Whenever pictures of Sam Hinkie would show up on the slideshow they projected onto the Lottery Party wall, the crowd would erupt, all aliens to a sun god.

It was inscrutably creepy, but magical in its own way, like a grown man riding Space Mountain alone.

“For whatever reason, the Sixers and The Process, and Hinkie specifically—I think we rub people the wrong way. I don’t think they like being told all this conventionally held wisdom that you try hard and talk tough and everything will work out. You really just need high-level superstars, and we said that out loud. I think that pissed people off to their core,” Levin tells me.

“I don’t really know why. I think there’s an anti-intellectual strain running through culture, even in the NBA.”

This seems like a dumb hill to die on, to delight in the day-to-day drudgery of nonstop loss and eviscerate ancient local columnists who disagree, until you consider its urgency.

“Plenty of people have become Process Sixers fans. A guy was tweeting yesterday about how he had a brain tumor and how the culture and community helped him out of it,” says Levin. “I think it’s just about hope in some respects.”

I used to have different feelings about this sort of thing until 2017 came along, then the joy started to instantly sap the second I woke up, and I don’t know many people who feel differently. There is a toll in the bombardment of 6 a.m. push notifications detailing the new way the world unsubtly crumbled overnight because of circumstances (or, well, one guy) no one can control.

You must find the small ways to yell back into the void, and root for the people who find the ecstasy in it.

“We’ve been able to give people who suffered through a tough time in sports, or anywhere, a community. It’s something to cheer for besides wins,” says Eskin.

“I mean, we blew away political Twitter [with Retweet Armageddon]. Donald Trump’s stupid tweets did not exist.”

Ben Collins is a brilliant writer, a dogged reporter and a Senior News Editor at The Daily Beast.  He’s also a SLAM columnist and writes The Outlet, a monthly column in which BC muses on…well, whatever he wants. Follow him on Twitter at @oneunderscore_.