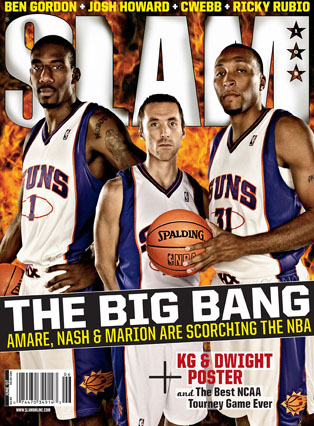 My wife and I moved this past weekend. Brooklyn, NY to Montclair, NJ. The emotional consequences of such a journey—leaving my favorite part of New York City after living there for nine years to move to a town I know little about—can be explored at a later time (and on a different website, as no one here will care). The practical consequences of this move (really, any move) are more relevant to the SLAM readers. Basically, between packing, unpacking, dealing with address changes, leaving one cable service, starting a new one (Comcast and I are not friends yet), I have barely been in front of a TV.

This would be one thing if it was mid-November (baseball done, hoops just starting and NFL only halfway through) or mid-July (only baseball), but a relative media blackout as the playoffs get underway?! This is not a good look for your boy Ed. The only game I’ve seen every second of so far was game one of Mavericks-Warriors, held after the first weekend we started trekking stuff to Jersey and on the eve of my last week in BK. Fittingly, this was as important a game as has happened in the Playoffs, seeing as it set the tone for what will be the upset of the of the Tournament should Dirk not grow some of what Sam Cassell has, but still, I clearly need much more. What I need in my life is more T-Mac (aiming to prove Big O wrong?), LeBron and Steve Nash in my life. Pronto.

Speaking of Nash, while I haven’t been able to watch the postseason like usual, I’ve still followed them closely, in the papers and on this site, where Sam is doing his increasingly predictable bang-up job running things, and one of the things I’ve enjoyed the most is the Suns surgical dismembering of the Lakers. I’d prefer not to be tossed in as Kobe-hater, but in basketball terms I just don’t see any way he and the Lakers deserve to beat the Suns. The Suns have a system more suited to their players, solid on-court chemistry and a ring leader that is (somehow) playing as well as ever. And, oh yeah, they’re on our cover!

We are just days away from unveiling our next issue on the site, a process that is sure to invoke some laughter (and, unfortunately, in certain business-minded circles, tears), but I think I’m gonna’ leave it to Lang to get into all that. In the meantime, dear readers, we have an issue on stands now that is looking as relevant as ever. Our Suns cover seemed scary for a second when they went into a mini-funk just after the classic Dallas OT win in mid-March, but ever since they crushed the Mavs in the rematch on April Fool’s they have been in a rhythm, living up to our cover line on a nightly basis. As for our cover and it’s burned-logo imagery, has anyone seen this? Did they bite us a bit or has that been part of the suns.com look for a minute? I’m not mad either way; just curious.

As a staff, we chose to cover one other team to feature in the Suns issue as we headed into the playoffs, and for obvious reasons we wanted someone from the East. Coalescing as they were pretty much from the All-Star Game on, the Bulls were the choice. Russ went out there and did his thing, blessing us with what proved to be a perfect pick for this issue. For while the Warriors beating the Mavs will deservedly be the bigger story, what the Bulls have just done in knocking off the defending champs is hella impressive as well. And again, not that we predicted it, per se, but we were certainly implying that the Bulls brand of tough-nosed basketball could cause fits for whoever they faced in the Playoffs, and so far that’s looking awfully accurate. So, if you still don’t have the Suns issue, pick it up now before it’s too late. Remember, the mag is what ultimately pays the bills around here. As for the predictions we (everyone but Khalid and Russ, at least, which seems appropriate) do make in that issue? They only run on two pages ard are easy to skim right over.

I’m leaving work early today as the folks from Comcast are supposed to come back to really get my cable, internet and phone squared away. Assuming they do, I’ll be back in business. Just in time for another big Mavs-Warriors game and round two around the corner, which is when the real fun should begin.