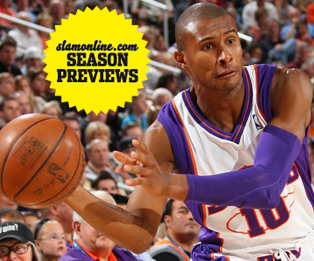 We continue previewing the Pacific Division with the Phoenix Suns. You can read past previews here.

Writing a Phoenix Suns season preview used to be as predictable as, well, the rising of the sun. The team would get about 55-60 wins, be one of a handful of serious contenders for the championship, the Big Three (Nash, Stoudemire and Marion) would have an All-NBA-level season

and the team would lead the league in scoring. Well, as the expression goes, things done changed.

The most glaring change is that fact that this will be the first time since 1998 that the Suns will enter training camp without Shawn Marion matrixing it up in the purple and orange. GM Steve Kerr has taken a lot of heat for the Marion for Shaq trade with critics complaining, correctly, that the Suns would be a better team with Marion still around. However, the Marion deal was basically a case of addition by subtraction, as Shawn didn’t want to be in the Valley of the Sun anymore and made it known to anyone who asked. While he still was a superb player and a good teammate, his trade request and constant complaining over a perceived lack of respect caused too much tension in the locker room.

The other significant change is, after averaging 58 wins a year in the four full seasons he coached the team, Mike D’Antoni was basically fired, without technically being fired. After being encouraged by the Suns brass to pursue other coaching opportunities, Mike D decided to go and clean up Isiah Thomas’ mess in NYC – may God have mercy on his soul. Kerr went the polar opposite from D’Antoni when he hired defensive-minded coach Terry Porter. While Porter is preaching defense, will he be able to practice what he preaches? He inherits a roster thin on lockdown defenders. Outside of Raja Bell, who is one of the league’s top defenders and pests, only aging Grant Hill and Shaq have ever been considered good defenders. It has to be hoped that rookie big man “Side Show Bob” Robin Lopez’s defensive skills translates from college to the pros.

Here’s how the Suns’ roster stacks up heading into the 08/09 campaign.

Despite being 34-years-old, two-time MVP Steve Nash is still amongst the best point guards, and best players, in the league. In fact, even if you suffered through a horrific farm accident and are missing the majority of your fingers you could still count the number of point guards better than Nash on one hand. Possessing the best court vision and passing ability in the game today, Nash has run amok over the league the past four seasons running the Suns high octane attack. However, Captain Canada has never been mistaken for a quality defender, despite his underrated ability at taking charges. Whether Coach Porter can bring something previously unseen out of Nash on the D end of the floor is unknown. The team, worried about Nash getting run down physically this year, has talked publically about limited the number of games he performs in. If that is to happen then they will need rookie point guard Goran Dragic to step up. A 6-4 lefty from Slovenian, Dragic is quick, experienced and a solid defender.

The team is set at the two-guard spot, with Raja Bell starting and Leandrinho Barbosa coming off the bench. Bell’s above mentioned defensive prowess will be relied on to anchor the defense in the backcourt. As an added bonus, Bell is also a deadly outside shooter, as his 578 three-pointers made over the past three seasons is only topped by Ray Allen amongst long-bombers in the league. Barbosa, arguably the fastest player in the league, should blossom this season without the added responsibility of running the point when Nash is out of the game. He provides instant offense off the bench and totally changes the complexion of the game. He is not, however, an adequate point guard and is much more effective, and comfortable, playing off the ball.

You probably could have gotten really good odds in Vegas about eight years ago if you wanted to bet on Grant Hill still playing at the age of 36. After one devastating injury after another, it appeared like Hill wouldn’t even make it to his 30s in the league. But low and behold, a healthy and still effective Hill will be turning 36 before this season begins. He enjoyed a very solid and relatively injury free first season in the desert last year and should still be able to help the team at both ends of the floor and take some of the play-making responsibilities off of Nash’s plate. Hill’s backup minutes should be taken by Matt Barnes, a new addition to the squad and a solid role player.

Amare Stoudemire is saying all the right things this offseason, claiming to be committed to being a solid defensive player. He showed flashes of it last season, posting a career-high 163 swats for the year, fifth best in the league. In fact, the only thing keeping STAT from being a complete player is defensive skills that can match, or at least come close to, his total domination on offense. With none of his stunning athleticism missing after his knee surgeries, Stoudemire is a beast in the post, punishing defenders and the rim at will. The skill that truly sets him apart though is his deadly outside jumper. Add in his 80% free throw touch and you’ve got yourself a player. Perhaps even a player worthy of having “Black Jesus” tattooed on his neck. Backing up Stoudemire at the four-spot is the versatile and inconsistent Boris Diaw. Capable of playing all five spots on the floor, Diaw is also capable of posting a triple-double pretty much anytime he wants. Unfortunately it doesn’t appear like he wants to too often. It would be a huge boost to the team is Diaw asserts himself more this year and plays at the level he did in 05/06 (13.3ppg, 6.9rpg, 6.2apg, 1.0bpg) when he won the NBA’s Most Improved Player award.

Contrary to reports that he can’t even dial a phone without running out of breath, word is that Shaquille O’Neal kept in good shape during the offseason. Whether that means good shape for an NBA player or good shape for an NFL offensive lineman remains to be seen. Considering he is a 36-year-old injury prone center who has played the third-most career minutes among active players, Shaq shouldn’t be counted on to carry a team on his massive shoulders anymore. What he can be counted on is being an excellent third option on offense behind Nash and Stoudemire, still demanding double-teams in the post and still being the most physically intimidating player in the league. If he can average a double-double like he did in his brief stint in Phoenix last year the team should be happy. First round draft pick Robin Lopez should see plenty of action for the Suns, especially if O’Neal’s string of injuries continues. While he won’t be able to bring much on the offensive end other than some putbacks and easy hoops, he will bring an intense, aggressive approach to defense in the post.

While it is true that only four out of the Suns’ projected 10-man rotation will be over 30-years-old this year, unfortunately the four are named Nash, O’Neal, Bell and Hill. All four are key contributors and all four’s best years are in their rear view mirrors. The time to win for Phoenix is now, or more precisely, it probably was last year or the year before that.

That being said, it’s not like this team won’t still be a factor in the league this year. STAT will only be turning 26-years-old in November and his game is still on the rise. How healthy he is and how much his game evolves this season – especially on the defensive end of the floor – will be the biggest factor on how far the Suns can go. They should be good for 50-55 wins again and how far they go in the playoffs will depend on who they match up with in the first round. A championship contender though? The sun has seemed to have set on that dream.