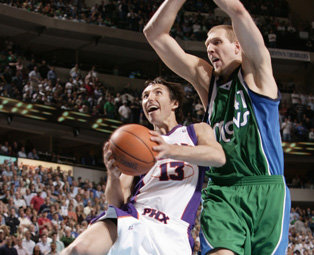 What a game last night! When I started taking notes in the first quarter and Phoenix was running away with it early, I was convinced it was going to be a blowout and I’d have to write a bunch about the commercials or announcers. But they hung around, made a few runs. Even when Dallas got way ahead to end the third, I knew somewhere down deep inside that it wasn’t over, that Phoenix was more than capable of getting right back into it. And they did, clawing their way back little by little.

• I was really disappointed with Josh Howard, who was big in the third and then completely disappeared in the fourth before fouling out. His little signature move is a killer, though, where he does a one-dribble crossover and pulls up for a midrange jumper. For some reason he stopped being aggressive, though, and he really took himself out of the game.

• During the game I was watching Nash play defense and thinking about how soft he is fighting through picks. Really, he just makes an initial cursory effort and then sort of falls back and watches his man zoom around him. If he’s looking for a place to improve his defense, it’s right there waiting for him.

• At the same time, Nash had two of the biggest defensive plays of the game: that charge on JTerry and the steal along the sideline where he threw the ball off Jason. The charge was particularly amazing, because Nash had been knocked down earlier on the play. As he scrambled to his feet you could see him looking upcourt, then he watched Terry drive in with the ball. Nash hustled over and stepped in just as Terry left his feet and took the charge. That was one of the smartest plays I’ve ever seen in a basketball game.

• This was also the kind of game where you learn to appreciate what Shawn Marion does. Like Gilbert Arenas, Marion is known for always complaining about being unknown. (Although Marion doesn’t have a commercial with a self-portrait that looks like Junk Yard Dog.) And as tiresome as it gets to listen to Marion talk about it, last night was a terrific example of why he’s so overlooked. The Suns hardly went to him at all in their halfcourt offense, but it was his hustle rebound and dish to Nash that gave Nash the three and sent the game to OT.

And then Marion made the defensive series of the game all by himself. Dallas threw the ball to Dirk in the post with Marion guarding him solo. Dirk tried to spin and dribble with no luck, so he threw the ball back out. Dallas threw it right back to Dirk, who tried again with no luck, so he threw it back out to Jason Terry and set a pick for him. Marion switched on the pick and ended up guarding Terry, who couldn’t get around Marion so he sort of drifted out to the corner, with Marion all over him. As he ran out of real estate, Marion tipped the ball from his hand and back off Terry and out of bounds. So basically, Marion stopped an MVP candidate twice and then a point guard and caused a turnover, all on one possession. (He also blocked one of Dirk’s turnarounds later.)

• And then there’s Amare. He finished with an eye-popping 41 and 10, shooting 16 of 19 from the floor. But to be honest, those numbers are a little deceiving. I’m not saying he wasn’t a beast on offense, because he totally was, alternately driving to the rim and drawing fouls and wetting midrange jumpers. But he was pretty terrible defensively — Erick Dampier finished with 11 offensive rebounds, and Dallas outrebounded Phoenix overall 55 to 38. For Amare to be considered a truly elite player he has to pick up his effort on the boards.

• Dallas is a hard team to wrap my head around. They’re great when they’re attacking the basket, but when they tried to play a halfcourt game in the fourth everything fell apart. Jason Terry is my main man, but too often he looked like he wasn’t sure what to do with the ball. Dallas is at their best when they run the ball through Dirk at the elbow, but there were many possessions where Dirk didn’t even come close to touching the ball. Why? No idea.

• As well as Dallas has played all season, they still seem a little soft to me. Phoenix gets nothing but grit from Raja Bell. Dallas doesn’t really have a guy like that, a glue guy. Greg Buckner is playing that role for them, but he doesn’t give Dallas that edge most championship teams have.

• Why did Dallas insist on switching picks all night? How many times did Phoenix come down, set a screen for Nash and end up with Nash going one-on-one against Dirk? Then Nash would drive to the basket and flip it to a trailing Marion or Amare for an easy bucket. Avery Johnson is a solid coach but this seemed like an odd time to not make an adjustment.

• Also worth mentioning that Dallas played most of that game without their most versatile guard, Devin Harris. Nobody seems to be talking about that today.

• Speaking of Dirk, last night’s game might have actually emphasized his claim on the MVP award. The Mavericks’ overall performance was so directly and uniquely tied to how well Dirk was playing that it’s hard to argue his value to his team. Just as Nash is the engine that drives the Suns, Dirk is Dallas’ rock. Dirk has to make those midrange fadeaway shots for Dallas to be successful. He missed too many of them last night.

• For all the talk about how good the game was, I don’t think it ranks among the greatest games of all time. It was the best game this season, but there was never really a point where the teams were going back and forth, trading knockout punches.

• This may be an unfair characterization, but didn’t Dirk’s intensity seem to kind of flicker last night? He had a few plays where he was fired up, like that drive and dunk, but as the game wound down and spilled into OT, Dirk seemed to fade in and out. And then he chose an absolutely terrible time to mouth off at the ref and pick up a T.

I love Dirk, love watching him play. He is easily one of the greatest basketball players of his generation and one of the best power forwards ever to play the game. I just wonder if he has what it takes to ever really lead a team to a title. Or look at it this way: How many guys on Dallas would take a bullet for Dirk? Don’t you get the sense that guys on Phoenix would be lining up to take one for Nash?

Our friends at dallasbasketball.com are urging everyone to hold up before writing off Dirk as the MVP, and they have a good point. There’s a reason Dallas has been crushing people all season long, and that reason is Dirk. So he didn’t play well down the stretch last night. Should this matter in the grand scheme of things? Yes, but probably not as much as we’re all making it out to matter.

To me, though, what it comes down to is this: In their biggest game of the season, when their teams needed a leader, Dirk could not step up and take control of the game. Steve Nash did.

And that’s what an MVP is supposed to do, isn’t it?