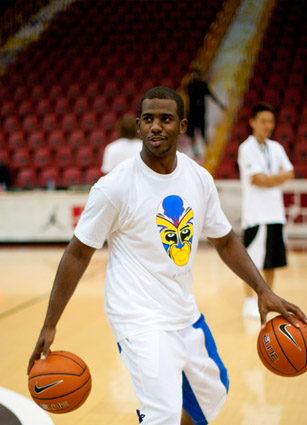 Despite all the uncertainty, distraction and inactivity surrounding the NBA, its athletes are having no trouble staying busy. A few weeks back, we posted snapshots from Kobe Bryant and Kevin Durant’s tours through Asia and China, respectively, and above are more pics from around the globe.

Beginning yesterday (July 26) through Wednesday, August 3rd, Team Jordan athletes Carmelo Anthony, Chris Paul and Dwyane Wade joined forces to take part in the Jordan Brand Flight Tour, a four-city tour through China celebrating the game of basketball within local communities. Throughout the tour, Anthony, Paul and Wade will make special appearances and interact with fans at consumer events, as well as participate in a variety of skills challenges and shooting contests to help attendees elevate their own game. In addition, the trio will be on hand to help the Brand introduce China specific editions of their signature products that takes inspiration from the Chinese culture as well as the athlete’s style of play.

To celebrate the tour, Jordan Brand created three special edition colorways for Anthony, Wade and Paul’s signature shoes. The shoes were based on Chinese Opera Masks and incorporated the characteristics of each athlete to pay homage to Chinese culture. Each colorway is tied to a specific story that is connected to Jordan Brand athlete’s Fly Around (Quick), Fly Over (Air), and Fly Through (Explosive) silos. The special designed footwear and apparel is available starting today, Wednesday, July 27 in Hong Kong; on Friday, July 29 in Chengdu; on Sunday, July 31 in Hangzhou; and on Tuesday, August 2 in Beijing.

The Jordan Brand Flight Tour kicked off in Hong Kong where Paul and Anthony celebrated the game of basketball with Chinese consumers. The fist day of the four-city tour offered both CP and Melo the opportunity to coach the Nike 19 and-under Chinese All-Stars at Southorn Stadium. Both athletes participated in drills and even played one-on-one with some of the young athletes. Later that evening, the players were treated to a panoramic view of the city at Hong Kong’s historic Peak.

Day two provided a great platform for both the athletes to interact with consumers. Thousands of fans greeted Paul and Anthony outside the Hong Kong Kicks Lounge where the Chinese-influenced versions of their signature shoes were unveiled. Both athletes posed for pictures, signed autographs and answered questions from basketball enthusiasts, sneaker heads and Jordan fans. Immediately following the retail activation, the athletes returned to Southorn Stadium to coach the 19 and under All-Stars. The game was very exciting and featured plenty of high flying action. After the game, three children from the Changing Young Lives Foundation presented gifts to the Jordan athletes that included a hand printing ceremony.  Next stop on the Flight Tour is Chengdu. For more information on Nike’s global initiatives and sneakers, check out Jordan Brand and NikeMedia.