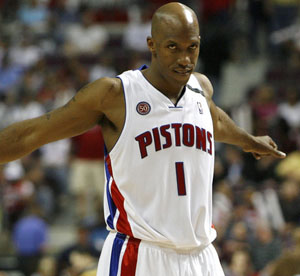 Nobody has stepped up to claim the Pistons-Magic series. That is, no SLAMonline columnist has. The Pistons are doing a good job of claiming the series already. Sure, it’s early, but Detroit seems to be “into it”, trying to win even though their collective backs are nowhere near the wall. Chauncey and the Pistons benefited from some fancy hometown Auburn Hills clockwork, as they were given an extra 4 seconds or so at the end of the third quarter, which wound up with the Pistons getting three points they didn’t deserve.

Orlando scored 36 points in the 3rd quarter, hitting 7 threes, overcoming a 14 point deficit. Detroit held on at the end, and now they can relax and blow two road games for old time’s sake before waking up at the last minute to survive the series and move on. I think people are expecting Boston-Cleveland to be a long hard-fought series. Maybe the Celtics came so close to going down in Patriot flames, that they now remember how to play on the road. Then again, it’s possible that LeBron goes off by himself vs. a great (?) Celtics team a la – please don’t be angry about this – Michael Jordan in ’86. Oh wait, the Bulls lost that game. The point being, the winner of Cavs-Celtics should be the worn down and tired team needing rest heading into the Conference Finals.

The Pistons are already out to their 2-0 lead. If they wrap this thing up early, they will get to rest for a while and be the fresher team against Boston or Cleveland. I know these Pistons well. They would rather go through extra difficulty than rest up and be the favorite.

Another funny thing about last night’s game and the extra time given to Billups… the Orlando Magic have one of the NBA marketing golden boys in Dwight Howard. The league would love to have him on the playoff stage for a long time, new blood as opposed to the same old Pistons that everyone outside of Michigan are bored of. Who do I sound like when I say the NBA has a preference in which team wins a series? Why, Rasheed Wallace of course! Sheed said nothing about the Chauncey play, no “The refs took care of business” or “That’s David Stern’s orders to the home team clock operator” or anything like that. Guess it’s different when you’re on the other end of it. Oh, Dwight had 22 and 18 in the loss. 22 and 18 is a man’s stat line. And yet, Orlando is still SOFT!

Okay, Aggrey should have a Spurs-Hornets game notes coming. Trust me, I find Chris Paul vs. the established defending champs much more interesting than this series.