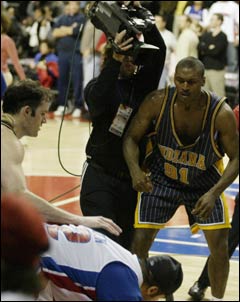 Today, Natalie Sitto from Need4Sheed helps us preview her team, the Detroit Pistons.

SLAM: Do you get the sense that Pistons fans are mad that Ben Wallace left, or are they understanding since he was such a beloved player in that city?

NS: I would have to say for the most part Pistons fans can’t blame Ben for leaving for the big paycheck. They respect Ben and his “Hard Work” attitude and thank him for helping the Pistons win a Championship in 2004. Ben’s 10 million dollar salary bump in Chicago is something most players wouldn’t turn down and after last season’s quick exit from the playoffs you could sense that Big Ben wasn’t happy with Detroit’s new offensive direction. But Ben’s departure did leave a bad taste with some Pistons fans who can’t understand how a guy like Ben would take the money and run, break up one of the best starting fives of all time and leave the Pistons team in a bad way after they traded Darko and Arroyo for cap space to sign him. Either way, the man will be missed in Motown.

Has management done enough to fill the void left by Big Ben?

The acquisition of Nazr Mohammed to fill the huge space left by Wallace was the best move Joe Dumars could have made without trading one of the Pistons’ core players. There weren’t many choices in this summer’s free agent pool and Dumars jumped on signing a center as soon as Ben bolted. Sure Nazr is no Ben but then again, nobody is. It’s not that easy to replace an All Star that is a four time Defensive Player of the year. Anyone was going to be a downgrade defensively but Mohammed brings some offense to the center position in Detroit, something they haven’t seen since Bill Laimbeer donned a Piston uniform.

Flip Saunders looked lost at times in last season’s playoffs, and some players grumbled. Is he the right man for the job?

You would think that coaching a team to a 64-18 record would solidify one’s job with an organization but Flip’s got to get this team to the Finals this season or risk losing his job. After last season’s playoff meltdown it was widely observed that Saunders’ failure to utilize his bench and make adjustments during the playoffs had many pointing fingers at Saunders’ coaching abilities. This season with the absence of Ben Wallace, Saunders can fully put his offensive minded ways to the test on the court. With a center that can score it will keep the opposition from using his defender to roam around and help on the other four players, like they did with Ben Wallace.

Flip has vowed to be tougher and more demanding on his players this season, and play more zone defense. He knows what he has to do, let’s hope he gets it done.

Ron Artest returns to the Palace of Auburn Hills on January 20th. What kind of scene should we expect in Motown that night?

Even with the change of uniform, a different number, new German kicks and rap career that’s not going to have 50 Cent running scared, Ron Artest has his Tru challenge when he steps on the Palace floor.

Even though Pistons fans haven’t seen Ron in two years, since the day he ran into the stands and started that awful brawl that has shamed the city, Detroit fans aren’t quick to forget. The Palace fans, known to be very loud, will be sure to let Artest know how they feel. It will be a steady stream of boos from the moment he hits the floor until he walks off it. Detroit can be ruthless, Ron. Get ready.

Alright, enough foreplay, how will the Pistons fare this season?

The Pistons are in a familiar underdog position going into the season. Everyone outside the Motor City has written off the team with the loss of Big Ben Wallace. But the major players still have not changed: Chauncey Billups at point, Rip Hamilton at the two, Tayshaun Prince at SF, Rasheed Wallace at PF, and Antonio McDyess. What other team in the league can boast four former All Stars and a burgeoning star as the team’s core? With the addition of Nazr Mohammed and Flip Murray, and the likelihood that Delfino and Maxiell will get quality minutes, you can be sure to see the Pistons right at the top of the Eastern Conference. Don’t count the Pistons out, they are just where they want to be, in the backs of everyone’s minds and ready to strike.